Stick around for the recipe below!

Despite being born and raised in a Northeastern Pennsylvania coal community, I never tasted the region’s peculiar holiday drink known as boilo until the year I left home. This honey-sweetened, high-octane, mulled whiskey is traditionally enjoyed in Pennsylvania Coal Region homes over the holidays. Living as I do now, in economic exile just outside of the distressed region I still call home, boilo signifies belonging. This may be more true for me in 2020 than ever before.

Created during the first quarter of the 20th century by Lithuanian immigrant miners, like my paternal great-grandfather, boilo is an adaptation of krupnikas, a spiced honey liqueur consumed in Lithuania, Poland and Belarus. While the miners’ version used moonshine as its base, rye whiskey is the alcohol of choice for boilo makers today. And no longer is boilo-making the provenance of lowly laborers from the Baltics. Today, all manner of “coal crackers” (any person from the Pennsylvania Anthracite Region) make boilo and put their individual mark on the traditional recipe.

Typically, boilo making happens at home. You therefore won’t find the beverage on the shelves in Pennsylvania “state stores.” Neither should you expect to order boilo in one of the region’s many bars, which doesn’t mean it never materializes in them.

One New Year’s Eve, when I was drinking with friends in a bar back home, the bartender appeared with shot glasses full of the golden libation, compliments of the house. A warm dram for everyone in the smoke-filled room prompted a spontaneous chorus of “Auld Lang Syne” followed by sentimental sighs and a few cathartic tears.

This memorable and maudlin public toast notwithstanding, boilo is traditionally consumed at home between Christmas and New Year’s among friends, family and neighbors. Here, portions tend to be more generous and moods lighter as visitors drop in and out of the night.

To make the beverage convenient for carryout, I’ve always served my boilo in Mason jars with lids. This year, amid the ongoing pandemic, I will again be packaging my boilo “to go.” But instead of doling it out in a snug, steamy kitchen packed with people, I’ll be leaving jars on cold porches for contact-free pick-up. Unlike the doctors of 1918, who prescribed the drink as a remedy for the Spanish flu, we know boilo can’t prevent or cure coronavirus.

The first time I made boilo was my first Christmas home after moving to New York for art school — “art school” being my excuse to flee the region and never look back. That December, after my 18th birthday, as my Greyhound pulled into a deserted downtown Tamaqua, Pennsylvania, I looked down from the bus window and imagined myself melting into the coal black earth below. “Dad, is there still that bottle of whiskey in the pantry? Can we stop at the grocery on the way to the house? I gotta pick up a few things.”

While no drink can wipe out the virus so we can physically be with each other this holiday season, tradition — flowing through time and experienced through our senses — can connect us to the places and the people to whom we belong.

The pandemic may impact how you share your family’s traditional holiday recipes, I hope you will nonetheless cherish making them. I’m delighted to make and share with you a winter refreshment from the far northeastern reaches of this Appalachian region we call home. Won’t you join me in raising a glass to the places and the people to whom we belong?

Erica Vinskie is an artisan perfumer and founder of HENNY FAIRE Co., a fragrance brand that features wildcrafted Appalachian botanicals in its creations. She has taught Appalachian Culture & Literature at Albright College.

“Up da back” is how folks back home refer to the wooded hills surrounding our mining patch town. My twist on the traditional boilo recipe includes wild foods like spicebush, rosehaws, mountainmint and Virginia juniper, which could be foraged “up da back” (but which you can substitute with common pantry items).

375 ml rye whiskey (In Schuylkill Co., where I grew up, they prefer Four Queens. I used premium rye from Stoll & Wolfe, a craft distillery in Lititz, PA. )

2 oranges, medium to large, sliced or in wedges

2 lemons, small, sliced or in wedges

¼ cup rosehips, cleaned and trimmed (if wildharvesting, wait until after the first frost. You can substitute dried rosehips used for tea.)

½ tsp spicebush berries (or substitute allspice, which has a similar flavor profile)

½ tsp dried mountainmint (or any dried mint leaf, such as that used for peppermint tea)

2) Simmer for 3-4 hours, until citrus fruit begins to pulp.

8) Serve warm or store in fridge. 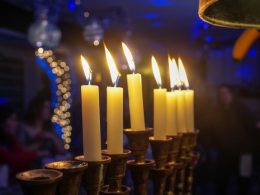 Since the onset of the COVID-19 pandemic this spring, Pastor Nancy White has shifted the way members of…
byLiz Carey 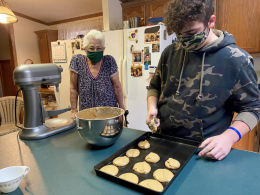 In her cozy kitchen in Hindman, Kentucky, LaRue Laferty watches over her teenage grandson, Jaxon Conley, as he…
byNicole Musgrave 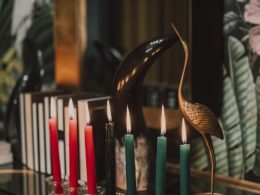 On the list of winter holidays, Kwanzaa is the youngest, first celebrated just five decades ago. But it’s…
byLexi Browning 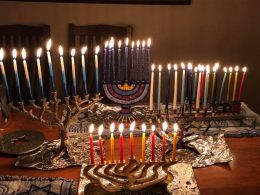 As Jewish holidays go, Hanukkah is not such a tough one to adapt for pandemic life. This year, the…
byMelanie Glazer
32 shares
32
0
0