Young leaders like Chris Dyson from Punxsutawney, Pennsylvania, are organizing an unprecedented number of demonstrations in response to the police killing of George Floyd. Historians say the range of localities participating is unprecedented.

As one of the only Black kids growing up in Punxsutawney, Pennsylvania (pop. 5,800), 21-year-old Chris Dyson kept a low profile. But when he saw marches over the murder of George Floyd sweep through American cities this month, he decided it was time to step up. He got on Snapchat and announced he was leading a march in the western Pennsylvania town against police brutality and racism.

On a Monday night in June, some 50 people showed up in the main square made famous by the movie Groundhog Day (although the movie was filmed in Illinois). Immediately, there was a minor backlash on Facebook. Was this Antifa, somebody wondered? Eager to show that the spirit of the demonstration was peaceful and locally-sourced, Dyson scheduled a second march for Tuesday. Every night that week, people used their First Amendment right to peacefully protest racial inequality. There was some pushback: A thrown beer can. The n-word. But overall, the marches worked.

“People said they’d never seen anything like it in the history of Punxsutawney,” said Dyson in an interview.

For the first time in this country’s history, its Punxsutawneys are popping with racial equality demonstrations. From Havre, Montana (pop. 9,300), to Harlan, Kentucky (1,750), people are gathering by the dozens and hundreds in a way that is historically unique and significant, say historians. Over 3,000 towns have held some form of demonstration, an explosion of political expression with far-reaching consequences, said Lara Putnam, a historian at the University of Pittsburgh.

These rallies are often led by young people like Dyson and are spread on social media platforms like Snapchat, TikTok and Instagram. Remarkably, they’re breaking out in counties Donald Trump carried by over 40 points and attracting explicit support from liberals and Trump supporters.

“This is absolutely huge,” said Terry Anderson, author of The Movement and The Sixties: Protest in America from Greensboro to Wounded Knee. “In the sixties, there were protests in the small towns around the colleges, but nothing like you see today, when it’s involving a much larger variety of people, old and young, Black and white.”

A young generation of activists is emerging “in an information environment that’s different than the older people around them,” said Putnam, the Pittsburgh historian. Instead of watching Fox News and scrolling Facebook like their parents, they’re networking, and getting inspired on their phones. Putnam has researched the wave of activism triggered by the Trump election, often led by suburban women. This group is showing up at the anti-racism demonstrations, but they’re not leading them. “That group helped win the 2018 election but this isn’t about them,” she said. “This is a new wave.”

Putnam’s research suggests that, even though the election isn’t until November, the demonstrations will steer the political conversation toward issues like racial justice and policing, and influence candidates from top to bottom of the ballot.

To be sure, some places are staying out of the fray. In McConnellsburg, Pennsylvania (pop. 1,000), there hasn’t yet been a march. “Some people here are posting things like Antifa’s coming to town, lock and load,” says Emily Best, who ran for state senate as a Democrat and lost in 2018 and has attended demonstrations in neighboring towns. “But even here, people are fed up about racism, and seeing other people speak out is encouraging and it grows.”

Amanda Page, a Columbus-based writer from Portsmouth, Ohio, says people are seeing progress and want “to take a stand now” and “be on the right side of history.”

There are other reasons the George Floyd killing is sparking activism where past incidents have not. One is the brutality of the crime. “People who are usually for the police see the video and know it’s messed up,” said Gage Vota, a 25-year-old punk singer in St. Clairsville, Ohio.

Another is the bipartisan spirit of the movement.

Hayley Mason, a 37-year-old therapist in Huntingdon, Pennsylvania (pop. 7,000), organized a march and was stunned at the diversity of the crowd, including Trump-supporting evangelicals. “It gave me goosebumps,” she said. “It really feels good waking up in Huntingdon knowing that our heart is in the same place” as the rest of the country.

In Franklin County, in central Pennsylvania, District Attorney Matthew D. Fogal, a Republican, wrote a letter stating: “I confess, when I first heard the phrase, my immediate reaction was that ‘All Lives Matter.’ I was wrong and part of the problem.” This is about “meaningful change”, he concluded.

Meredith Gallina helped Dyson organize the Punxsutawney demonstrations. The 22-year-old grew up in town and had never been to any kind of political gathering before going to a march in Philadelphia right after the Floyd killing. “Even in my own family, people were asking why this has to happen in our town,” she said. “We don’t have a lot of minorities here, so this is exactly the kind of town this has to happen in.”

That exchange led to a fruitful three-hour conversation with her parents. “I explained why we weren’t chanting ‘All Lives Matter’,” she said. “I used the analogy that if one house is on fire, you don’t save the water for all the houses.” Later in the week, her parents stopped by the demonstration to offer support.

Now, Dyson, Gallina and others are riding the momentum created by the rallies toward actual change. They plan to petition for an MLK street in town and meet with the school board to talk about establishing an anti-racism curriculum.

Police Chief Matt Conrad, who heads a staff of 15 officers, has agreed to meet with Dyson to discuss further ways of improving racial tolerance in town. “When they started, they asked me for a permit, and I said you don’t need my approval, you have freedom of speech in America,” said Conrad. “And they were great all week, I’ve never seen anything like this.”

The 33-year-old chief, who notes that “the KKK was big here in the 90s”, stopped by every day to talk to the demonstrators. “I left an olive branch for us to create something together,” he said. “There’s enough division in this country.”

This piece was originally published by The Daily Yonder. 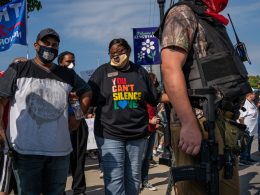 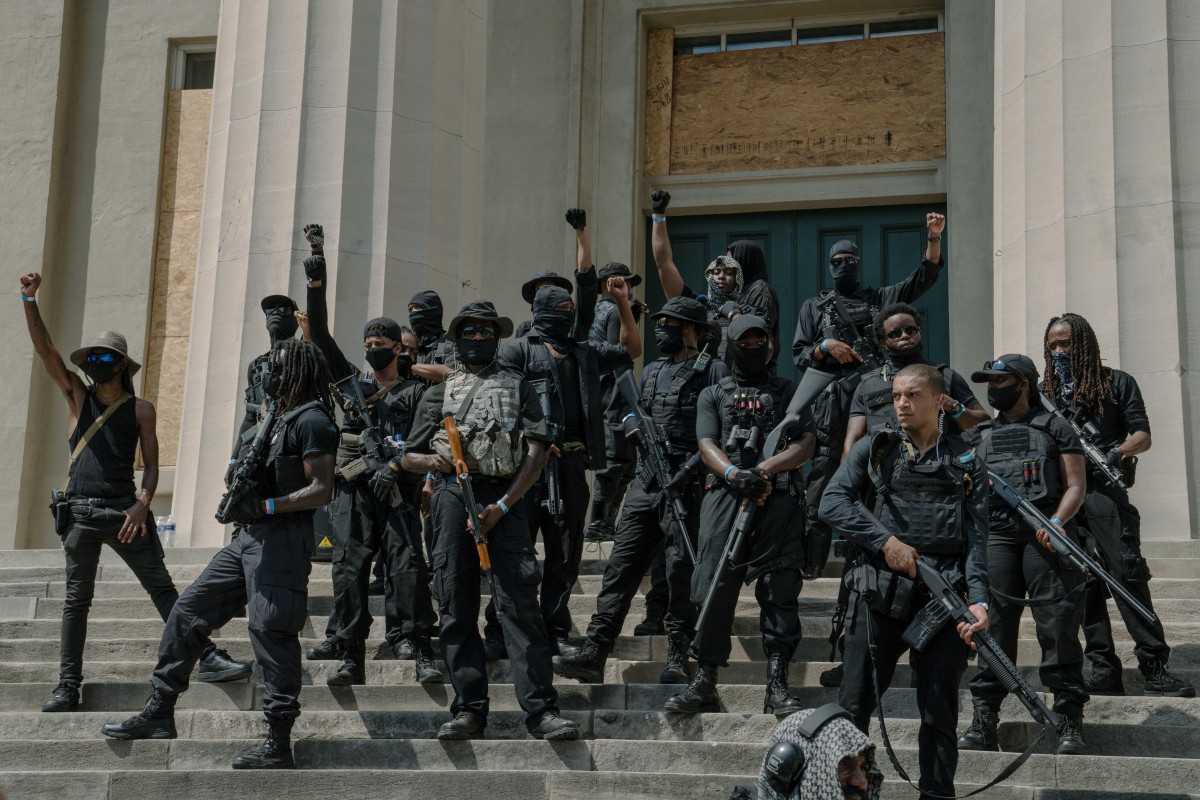 On Saturday, two gun-toting political groups planned to square off in downtown Louisville. NFAC, which stands for the…
byChris Jones
14 shares
14
0
0 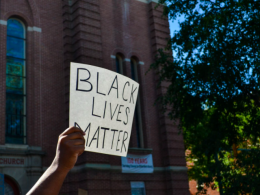