byCaitlin Tan
6 minute read
Shane McManus is the founder of the Greensboro Art Cooperative. He is an established artist and musician in the region. Photo: Caitlin Tan, WVPB
Total
12
Shares
12
0
0

Walking down the streets of Greensboro, Pennsylvania, it feels a bit like a ghost town. There are houses, business signs, a post office, but only two cars drive by in 10 minutes and no one is walking the streets.

The small town in southern Pennsylvania is just across the West Virginia border. It sits on the banks of the Monongahela River, surrounded by small hills and patches of trees. In years past, the town has weathered the boom and bust of a pottery industry, river trade and coal. Lately, it has been more bust than boom.

But now, some artists are trying to stimulate the local economy using what they know best: creativity. They are all part of the Greensboro Art Cooperative – a non-profit art collective.

Shane McManus, a West Virginia native, is the founder of the co-op. He’s spent his life immersed in music and arts. Now at 31 years old, McManus is trying to use his love of the arts to revive the town.

“Our goal is to preserve the past but promote the future. Through using what the past has given us, we can create really beautiful art in our small Appalachian towns, which in my opinion is diminishing,” he said.

Three buildings on the main street of Greensboro make up the art co-op. The quiet atmosphere of the town abruptly changes when one walks into the former ice cream parlor turned ‘Music Shop,’ where McManus and his friends play music.

The entire room is filled with artwork and antiques. There’s a stone chair shaped like a hand, porcelain dolls lining the bookcases and a boar’s head hanging near the ceiling.

Members pay a $200-lifetime membership or the equivalent in labor, and profits from wares made at the co-op are split 50/50 with the artist.

“Getting them to see hope, where there was none. That’s why people leave, to find greener pastures,” McManus said.

Greensboro was once a thriving town with a rich artisan history. It was originally settled by German glass blowers in the 1700s.

It is also right on the Monongahela River, so it was part of a major river trading route.

Greensboro’s mayor Katie Sill says she’s heard stories of the early days when a hotel stood right by the river.

“At one point a circus came down the river and they had an elephant in the lobby. It was a booming and bustling town,” Sill said.

In the 1800s, the first large-scale pottery operation opened in Greensboro. The wet, muddy soil near the river creates rich clay — perfect for pottery.

In fact, it is not rare to find 200-year-old pottery today. The co-op has preserved an original kiln used by settlers.

But, as artisans moved away and trade moved away from rivers, Greensboro became less relevant. It made a slight comeback in the coal industry in the mid-1900s, but Sill says that too has disappeared.

“Some buildings have fallen into disrepair or [have] been torn down,” Sill said. “There are not really many businesses left in the town.”

In some ways, Greensboro is not that different than many small Appalachian towns, where the coal industry, which was once a driving economic force, is now declining.

This leaves many towns without a sustainable economy, much like Greensboro.

Tim Ezzell is a research scientist at the University of Kentucky, and he focuses on asset-based development, which, as he explains it, means “using the assets you have at hand or at your disposal, basically what your community already has in place. Your local talents, resources, skills, art, heritage and using those to create economic opportunities for people in your community,” he said.

Ezzell says concepts like the co-op can grow a town, but it has to be done realistically. As in, it is not cheap, it can take many years, it needs momentum and, most importantly, the local community must be accepting of change.

“Change is hard and you have to be willing to accept change in order to move forward,” he said.

And Sill says the town is ready for that change.

“We’re all really hopeful that we’ll get that next wave of whatever that wave will be,” she said. “Something new to bring a little bit of bustle into the town. I don’t know if it’s ever going to be quite the same, but every phase is different.”

And the co-op is relying on local assets to try to bring about that next wave. Members are fixing up old storefronts to use as studios. They’re also using local clay to create art.

“Everything is donation, all of our resources have been found, donated, upcycled and recycled,” McManus said. “It’s really amazing what you can put together just with what you find around.”

As for operational costs, McManus said he’s been quite fortunate. His father, Keith McManus, has funded most of the co-op. A former mayor of the town, Keith is something of a musical legend in the region because of his involvement in the old-time music community over the years.

People can be assets too, and in many ways, Keith himself is one of the town’s greatest resources.

Because of the financial cushion, and Keith’s arts and music connections, McManus says there is not a push for co-op artists to mass produce and or even sell their work. Rather, they can focus on creating art.

“Our goal is to stay within a tri-county, if not a tri-state area. We don’t want to branch out as far as what we sell on the internet. We’ve purposely held out to keep our wares locally,” McManus said.

During the past eight years, the co-op has renovated Greensboro’s old, abandoned theatre into a studio space. And it has 65 members — some from the Appalachian region and others from across the world. Many are people McManus has met through work in the music and arts industry.

McManus says the co-op has given some of these artists a reason to either stay or come back to create in Appalachia.

“So many of my peers and friends have had to go and move out of the state, out of Appalachia where they are from just to find a studio,” he said.

So artists come and go throughout the year — whether it is for an impromptu jam, to fix their bicycle or to make their next piece of pottery. Sill says this is important for the town.

“They breathe that extra bit of life when they are there,” she said.

The next goal for the co-op is for artists to work and live in Greensboro, but right now it is not fully developed.

The studio spaces are a little rough around the edges, and the storefront is still more of a working space. McManus hopes to renovate two buildings into a coffee shop and restaurant, but he says it takes time.

It takes time to create change, to bring Greensboro’s artisan history forward into the modern day. And it also takes a vision, like the ability to find strengths and assets in unlikely places.

This story is part of an Inside Appalachia episode exploring folklife and material culture in Appalachia. 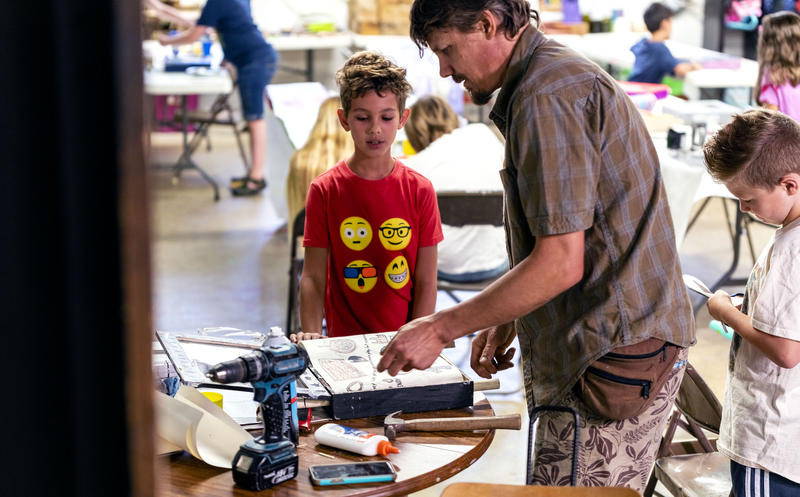