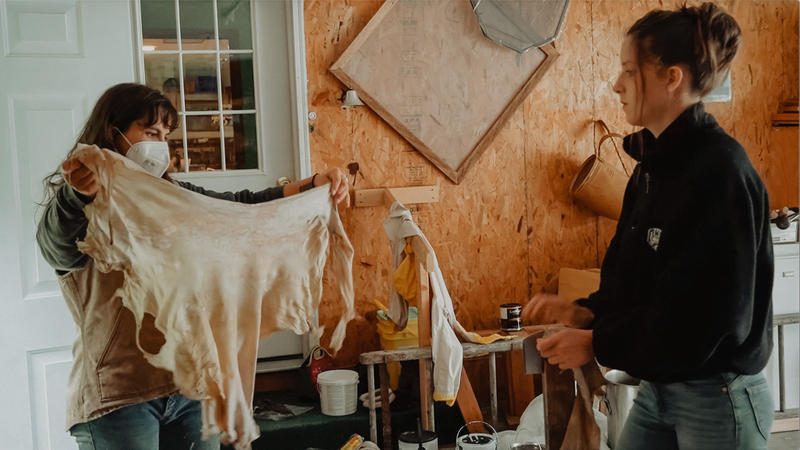 After soaking the hide in a solution of water and brains, Talcon wrings her hide to prepare it for the next stage. Photo: Clara Haizlett/West Virginia Public Broadcasting

In a quiet neighborhood in southeast Ohio, Talcon Quinn and her 12-year-old apprentice Juniper Ballew have revived an age-old tradition with just three ingredients: a deer skin, some water and a handful of animal brains. They have transformed a hairy, fleshy animal skin into buckskin, a buttery soft material stronger than fabric.

In a special report as part of the Inside Appalachia Folkways Project, West Virginia Public Broadcasting reporter Clara Haizlett met with Quinn and Ballew to find out why they practice the tradition of brain tanning.

Quinn has trained Ballew in the art of brain tanning, through an apprenticeship program with the Ohio Arts Council. While most modern tanneries use chemicals to tan, Quinn and Ballew use the traditional method of soaking the hide in animal brains. In the final stages of the tanning process, Quinn examines her hide while Juniper sets up the workspace. Photo: Clara Haizlett/West Virginia Public Broadcasting

Brain tanning requires a strong back and a stronger stomach, patience and some serious elbow grease. To tan one hide it takes around 16 hours of intense labor extended over multiple days.

Quinn’s workshop is located out of her garage at her home, which is in a quiet neighborhood on the outskirts of Athens, Ohio.

Holding a deer skin, Quinn instructed her apprentice to “find the neck, find the membrane side, and what I’d like you to do is go down the spine, and put your weight into the cable.”

Quinn coached her apprentice through a step called cabling, a technique for softening the hide. At this stage in the process, the deer skin was slippery and limp, resembling a slimy blanket. Following Quinn’s lead, Ballew leaned back and pulled at the hide, abraiding it against a wire cable. Back and forth she yanked at the deer skin, one foot in front of the other.

Both Quinn and Ballew are from southeast Ohio, a cradle of forests, rivers, lakes and the foothills of the Appalachian Mountains. Growing up in the region, Quinn spent a lot of time outdoors, developing a deep appreciation for her natural environment. In her early twenties, she began providing more of her own food by fishing, hunting and picking up roadkill.

Prior to the adoption of these practices, Quinn was a vegetarian, then a vegan. Yet in spite of this shift in lifestyle, she continued to set high ethical standards for herself. Quinn decided that if she was going to source her own meat, she wanted to be respectful and use all of the animal. That is what led her to brain tanning.

“I think because I’ve always been a craftsperson and I’m not easily squeamish, I just took to it really easily and fell in love with it in ways,” Quinn said. “I mean there’s times where I don’t like it at all because it gets smelly.” Quinn sources her hides from local game processors where animal carcasses are often just thrown away after the meat is processed. After skinning the deer, she starts tanning, transforming the throw away hides into bags, clothing and knife sheaths. She sells these unique pieces online to a diverse group of customers. Quinn also teaches brain tanning to learners of all ages and identities. Her favorite class to teach is the buckskin bikini top class.

“The bikini top class was passed down to me and it’s been this really beautiful thing,” Quinn said. “It’s people of all different body shapes coming together to make something very sacred and beautiful for their body, and to encourage them to honor themselves and feel sexy.”

By sharing brain tanning with customers and students, Quinn hopes to encourage a more respectful relationship between humans, animals and the environment.

“It’s heavy. It’s heavy work,” she said. “And there’s a lot of respect and like gratitude and even a sense of grief for the loss of the animals or the loss of a spirit. But I also really believe that everything continues on and by continuing on it lives on. That’s the one thing I hope people see when they see my work, that it’s a lot of humbling respect that I put into it.”

When Quinn found out about the Ohio Arts Council apprenticeship program, she saw the opportunity to pass on the tradition of brain tanning to a young person in her community. Ballew belongs to the Potawatomi Tribe, a Native American group centralized in the Great Lakes region. Although Ballew was introduced to tanning at a young age, she never had formal training in the skill. Now under Quinn’s tutelage, Ballew has made her own buckskin medicine pouch. Ballew plans to incorporate the medicine pouch into the regalia that she wears at tribal powows in Michigan. She said that brain tanning, no matter how obsolete it might appear, still has value in today’s society. Ballew shows off her tanned hide which she will sew into a medicine pouch. Photo: Clara Haizlett/West Virginia Public Broadcasting

“There is so much out there that has like shriveled up and died because people don’t think it’s valued enough,” Ballew said.

For Ballew, brain tanning is about connecting with her Potawotami ancestors and their way of life.

“The great thing with how Native Americans hunt is that they take one and they’re satisfied with it because they use all of it and what they don’t use goes back to the earth,” she said.

In Native cultures around the world, brain tanning was an ordinary practice, including here in Appalachia. In 18th century America, European settlers and Native Americans often traded food and supplies for buckskins or “bucks” for short. According to regional legends, this is where the slang word “buck,” meaning “dollar” comes from. Yet as the fur trade became commercialized and Native Americans were removed from their lands, traditional tanning methods fell by the wayside, displaced by industrial chemical tanning. Today the majority of global leather comes from China and instead of using natural materials as tanning agents, most modern tanneries use chemicals.

Although tanning has changed a lot over the years, Ballew said that traditional tanning still holds important cultural value.

“My uncle, when we FaceTimed the other day, he called it ‘learning the language of his grandmother,’” Ballew said. “Because she was taken by the settlers and taught English and forced to cut all her hair off. He was learning what she had been forced to forget.” “I want to inspire kind of a new definition of Appalachia, particularly around here where it’s just so poor,” Ballew said. “And I want the youth to grow up knowing that there are these skills that were kind of lost but they’re not forgotten. We still have it and we can make it something new that viable for today.”

Although they have come to the practice for different reasons, together Quinn and Ballew are reviving the tradition of brain tanning, hour by hour and hide by hide.

The Folkways Reporting Project is made possible in part with support from Margaret A. Cargill Philanthropies to the West Virginia Public Broadcasting Foundation. Subscribe to the podcast to hear more stories of Appalachian folklife, arts and culture.