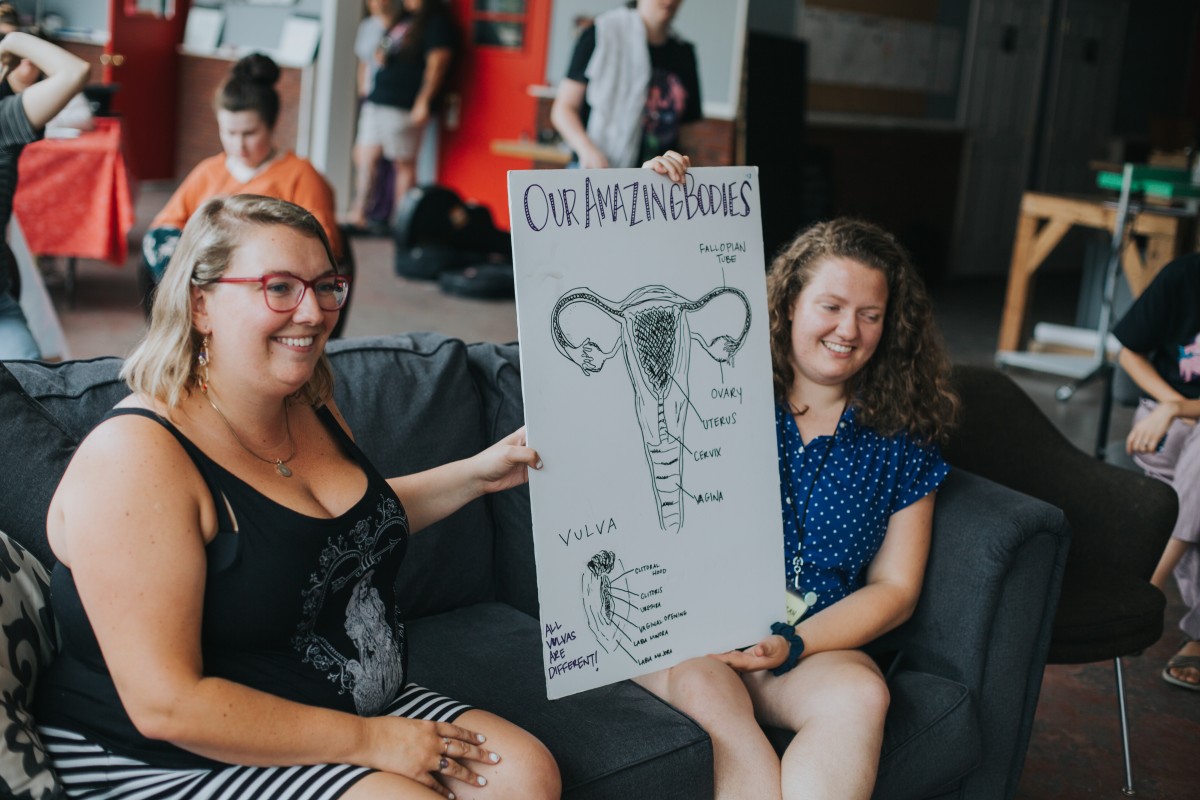 At a summer workshop in Whitesburg, Kentucky, Sexy Sex Ed had 20 girls between the ages of 11 and 18 participate. Photo: Natasha Raichel, Provided

In the mornings before school, Larah Helayne makes sure she’s got her homework done, her textbooks packed and her cell phone charged. She also makes sure that she’s got plenty of birth control and emergency contraceptives in her bag, just in case any friends or classmates need them.

Helayne is a senior at her Mt. Sterling, Kentucky, high school and a co-facilitator of Sexy Sex Ed workshops in Appalachia.

She hasn’t always stored condoms and Plan B in her school bag— she didn’t start carrying contraceptives until after she participated in a Sexy Sex Ed workshop last year. Sexy Sex Ed provides medically-accurate information about sex and reproductive health to young people. The space is for folks of all ages and all bodies to learn about sex, and much of the explorative work is done through media projects.

“Before Sexy Sex Ed, I knew absolutely nothing. I could not have told you what a clitoris was or what the parts of my own system did or how to go about interacting with other bodies at all,” she said. “I wasn’t used to being able to freely ask questions and talk about sex, but what I learned through Sexy Sex Ed sort of started a journey for me. I came home, and my friends bought me an electric toothbrush, since we can’t legally buy vibrators here if we’re under 18.”

The need for comprehensive, medically-accurate and age-appropriate sex ed is real, especially in areas like Appalachian Kentucky where 47 percent of pregnancies are reported as unplanned, and the teen birth rate is 68 percent higher than the country overall.

Tanya Turner, creator of Sexy Sex Ed, is from Appalachia— specifically from Bell County, Kentucky,— and she said it was finding out about the need for sex ed in the region that moved her to begin work around reproductive justice in 2012.

In the U.S., 29 states and the District of Columbia mandate that sexual education be provided, but only 13 require that sex ed be medically-accurate or age-appropriate. Of the 13 Appalachian states, eight are required to provide sexual education. And while Kentucky is a state that provides sex ed, there is no focus on accuracy or on the information being appropriate for students. Turner said the sex education most young people do have access to is abstinence-focused.

“In Appalachia, we have higher rates of STDs and STIs than the national average, and we know from research at West Virginia University that women near mountaintop removal sites are 60 percent more likely to have babies with birth defects,” Turner said.“In an environment where your space puts you and your baby at risk, we have to level with unplanned pregnancy.”

“And then there’s the political ramifications,” she went on. “Since 2016 and even before, we have been moving toward the roll back of reproductive health, particularly in Appalachian states. It’s knowing all that and how big the need is that makes it impossible to say no to folks who are asking for sex ed. The need is just so great.”

In Turner’s work, students report much of the sex ed that’s taught in schools or churches is fear- and shame-based and often inaccurate. Taylor Pratt, who works with Appalshop, a media, arts and education center in Whitesburg, Kentucky, said her sex ed experience was very much in line with what Turner hears from her program’s participants.

“They have a nurse come in for a week, but they separate the boys and the girls. For the girls, they basically just used scare tactics and told us that if we got pregnant, we would probably die,” Pratt said.

Sexy Sex Ed started as a skillshare of the STAY Project, and in 2012, Turner facilitated the first official workshop in East Tennessee at the Highlander Research and Education Center, an organization steeped in progressive history whose leaders have played leading roles in much of the nation’s history, including the start of the Civil Rights Movement.

Since 2012, Turner has worked with Appalshop, the Kentucky Health Justice Network, a nonprofit organization that provides direct support, education and outreach to Kentuckians seeking reproductive justice, and with All Access EKY. All Access provides young people with a full range of contraceptive methods through storytelling and community outreach in 10 Kentucky counties.

Turner announced in July of this year a new partnership with the KHJN and funding from the Appalachian Community Fund that will allow her to expand the program beyond what her own pockets can provide. She’s planning a training for this fall to teach community members how to facilitate sex ed workshops and has hopes to continue increasing the cities with a Sexy Sex Ed presence.

Marcie Crim is the executive director of the KHJN, and she said it’s the people she met growing up in small-town Kentucky that inform her work.

“For fourth and fifth grade, I lived in Nicholas County— we moved there from Lexington when I was two weeks into my fourth grade year. I had friends there who were sexually active in fifth grade, and it was often with boys who were in middle and high school,” Crim said.

“Doing this work, I think about my daughter…but I also think about those kids. They needed this kind of program. It could be so transformative in small, rural towns where there isn’t a whole lot to do besides experiment. There is a need in these small communities, and Tanya saw that.”

Turner said she is inspired every day by the young organizers she works with and by the inquisitive students in her workshops, and she can only hope that the program — or at least the message — will spread.

Helayne said she sees her work with Sexy Sex Ed as just the beginning.

“I grew up resenting this place and being from here, but I realized that so many of us hate it because we’re blind to the beauty of it. We only see the problems because we see this everyday,” Helayane said.

“I grew up very poor, and people in my family are addicts, but that’s not the whole truth of Appalachia. I had to sort of do some reckoning with myself and how I had been affected by other people’s perception of my people,” she said. “In the end, everything that has to do with Appalachian liberation, that’s my ultimate goal. I just want to play a really good banjo and fight for my home to be better. And this is a state where that’s really possible.”

Kentucky’s history of activism speaks to that possibility, Helayne said.

“We come from people who stood at picket lines for years at a time, who wrote incredible protest songs, who worked for union rights and women’s suffrage. That’s all Kentucky,” she said. “There are some really incredible pockets of people who are all united and fighting for the same things, and those pockets are a big piece in a much larger puzzle of what the future of Appalachia will be.”

Bailey Basham is a journalist based in Winchester, Tennessee. Born and raised on the Cumberland Plateau, she writes frequently about food, the environment, sustainability, arts and entertainment, and the people that hold communities together.