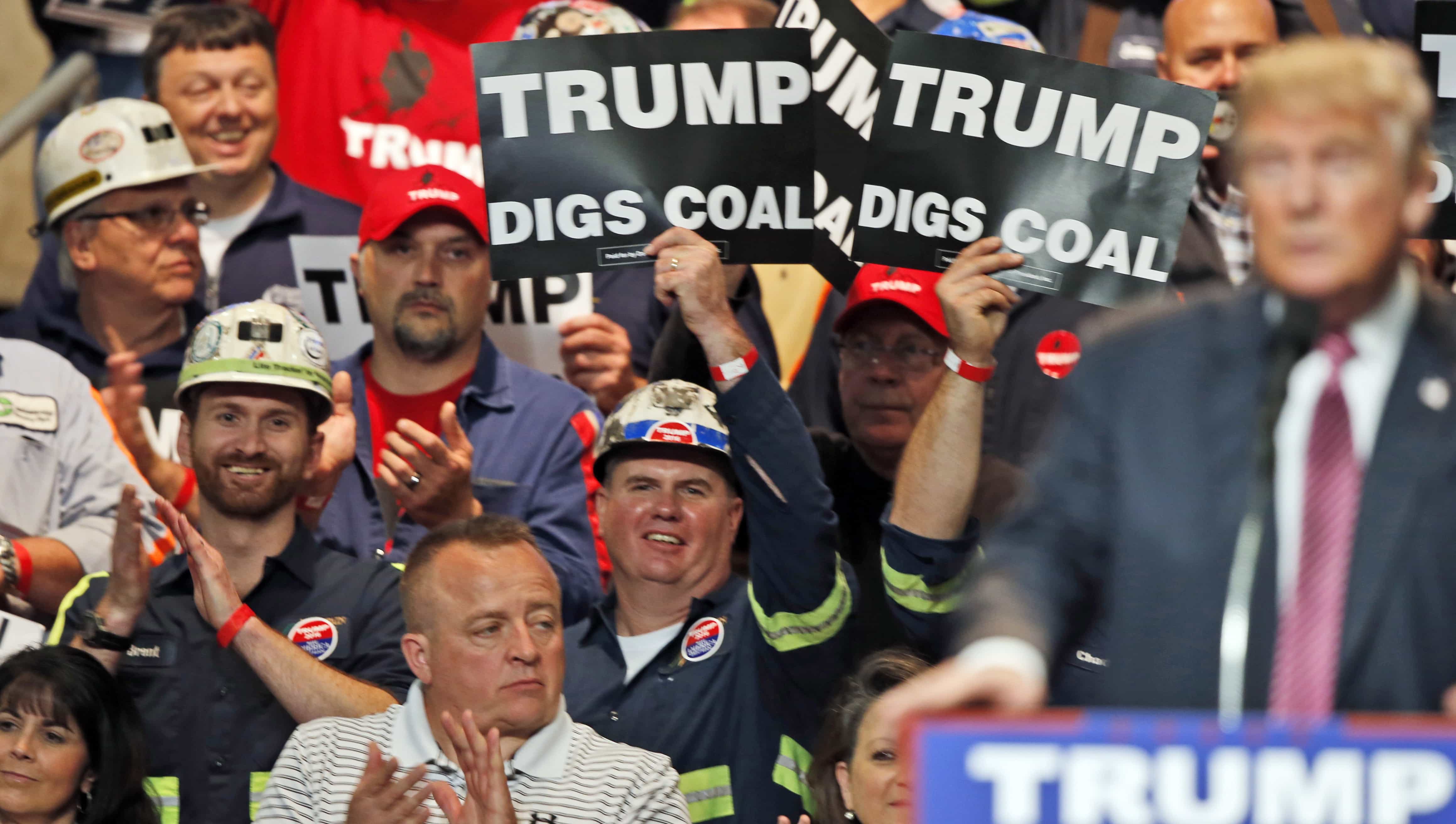 It’s been two years since President Donald Trump took office and began rolling back environmental regulations on the coal industry.

At a November rally in Huntington, West Virginia, the president took credit for a coal comeback in front of a cheering crowd.

“We’ve ended the war on beautiful, clean coal and we’re putting our coal miners back to work,” he said. “That you know better than anybody.”

But federal data about the industry tell a different story.

Mine operators and independent contractors are required to report regular employment information to the Department of Labor’s Mine Safety and Health Administration, or MSHA. Preliminary figures for 2018 show 80,778 people were employed by mine operators and contractors. That’s a record low, and about a thousand fewer than were employed by coal in the last year of the Obama administration.

In the Ohio Valley, things looked much the same. In 2018 two prominent Ohio Valley utilities announced a spate of coal power plant closures, federal data show the region lost 150 industry jobs, and Westmoreland Coal, which has a substantial presence in Ohio, declared bankruptcy.

However strong exports of one type of coal continued to support jobs for those who provide metallurgical coal, which is used to make steel. That boosted employment in West Virginia, where the president’s supporters say he is keeping his promise to revive the industry. Elsewhere, others aren’t convinced and are looking for ways to fill the void left by coal’s decline.

The Trump administration has leaned heavily on the U.S. Environmental Protection Agency to try to boost the region’s coal industry. In March, 2017, Trump signed an executive order that kicked off an in-depth review of a series of environmental regulations. Since then, the administration has proposed a series of regulatory rollbacks aimed at helping struggling coal plants and operators.

In August, the EPA proposed a replacement for the Clean Power Plan, an Obama-era regulation that aimed to cut greenhouse gas emissions from power plants by one-third over the coming decades in an effort to stem the effects of climate change.

The Trump EPA has also moved to roll back existing regulations that govern the storage of toxic coal ash. In December, the agency proposed a rule revision that would allow coal plants to emit more carbon dioxide per megawatt-hour of electricity generated by scrapping a requirement that plant operators install expensive technology that reduces emissions. The agency in December also proposed weakening a regulation that limits mercury and other toxic emissions from coal power plants.

The Trump administration last year was also embroiled in an ongoing attempt to bail out struggling coal-fired power plants, which has since stalled.

But many industry analysts believe Trump’s looser environmental rules have not helped the industry.

“So we had some pretty significant regulatory rollbacks in 2018,” said Trevor Houser, a coal analyst at the independent research company Rhodium Group. “And yet, 2018 was a record year in terms of coal plant retirements.” [Story continues below map]

Houser said there is also little indication any utility in the country is planning on building a new coal-fired power plant, even under the current, more relaxed regulatory environment.

Last month, S&P Global Market Intelligence reported Longview Power LLC, which operates one of the newest and most efficient coal-fired power plants in the U.S. just outside of Morgantown, West Virginia, is seeking investment to shift some generation from coal to natural gas and solar. Energy Secretary Rick Perry visited the power plant in the summer of 2017 to tout the benefits of coal in a competitive energy market.

Across the Ohio Valley, utilities announced more coal power plant closures in 2018. After Ohio-based FirstEnergy Solutions declared bankruptcy, it announced it would close two coal-fired power plants, one in Pennsylvania and one in Ohio. Another of its plants in West Virginia will close by 2022. Another major utility, American Electric Power, announced it was moving up the closure date for some units in its Conesville plant in Ohio to 2019.

A report by the Institute for Energy Economics and Financial Analysis, an energy think tank, found cost is the biggest force in coal’s decline. Renewables and gas-fired generation continue to provide a cheaper and more flexible alternative.

With more power plant closing there are fewer places to sell thermal coal, which is burned to make electricity, and that has a major impacts coal producers in the region.

“If you look at the share of where the coal was headed, the domestic utility market for West Virginia coal continues to decline,” said Jason Bostic with the West Virginia Coal Association. “And that’s extremely concerning.”

Nationwide and as well as in the Ohio Valley the amount of coal mined dropped to the lowest level in nearly 40 years. Coal exports, however, were up, driven largely by international demand for metallurgical, or met coal, by Asian countries.

“There’s the kind of continual disconnect between the poor fate of the thermal coal market and a little bit more resilient met coal market,” Houser said.

To meet higher met coal demand, some mines in West Virginia and Virginia have reopened. Federal data from MSHA show West Virginia mines added a little over 500 jobs in 2018.

Tom McLoughlin trains coal miners in southwestern Virginia, where some met coal mines have ramped up production. He said he’s been busy since Trump took office.

“As soon as Trump got elected It was like somebody taking the finger out of the dam,” he said. “There was all kinds of activity including especially the training, and it’s held up fairly well since.”

But even in West Virginia, where things have looked slightly better for the industry, there were also some high-profile mine closures. A mine in Wyoming County shut its doors in October, putting about 400 miners out of work.

There are a lot of indications that the international demand for met coal, especially by China, is cooling off.

“In 2019 we have some pretty troubling signs about the outlook for the Chinese economy this coming year and that could take the wind out of the sails of the metallurgical coal market pretty quickly,” said Houser with the Rhodium Group.

It’s possible that West Virginia’s bounce in production could be a brief one. Elsewhere around the Ohio Valley coal employment has been stagnant, at best. Ohio mines added just 16 jobs last year, and Kentucky lost almost 400 jobs, according to MSHA data.

Retired Kentucky miner Larry Miller said it’s not surprising the data show the industry has not bounced back. He added that he didn’t have a lot of faith in Trump’s ability to revive the industry in the first place.

Miller worked for more than two decades underground and said he made a good living. In his own backyard he said he’s seeing first-hand that coal is often no longer an economic source for electricity. For example, near his slice of western Kentucky a group of utilities is installing an 800-acre solar farm, further evidence, he said, of coal’s declining importance.

That doesn’t bode well for miners. Houser, with the Rhodium Group, said while the Trump administration doubled down to boost coal, it has not offered any additional aid for job retraining.

“The past few budget proposals from the Trump administration have actually reduced the amount of support for retraining and economic diversification and coal retraining in coal country,” he said.

Clemmy Allen has been retraining coal miners for more than 30 years for the United Mine Workers of America.

Since 2012, the UMWA’s Career Training Centers in Appalachia has relied on a Department of Labor grant, which provides $5000 in tuition assistance and a $20 daily stipend to West Virginia miners who have been laid off or lost their jobs. He said thousands of miners have taken advantage of the program, but acknowledged it’s also limited.

“It’s very, very difficult for for a person just to … just shut down and go into training and not have money to, you know, meet their monthly obligations,” he said.

Allen said in previous years the center had more federal grants to retrain miners in other states, and he says there are thousands of miners who have lost their jobs over the years who have since found work, but would like to be retrained to do something else.

“We never have enough resources, never,” he added.