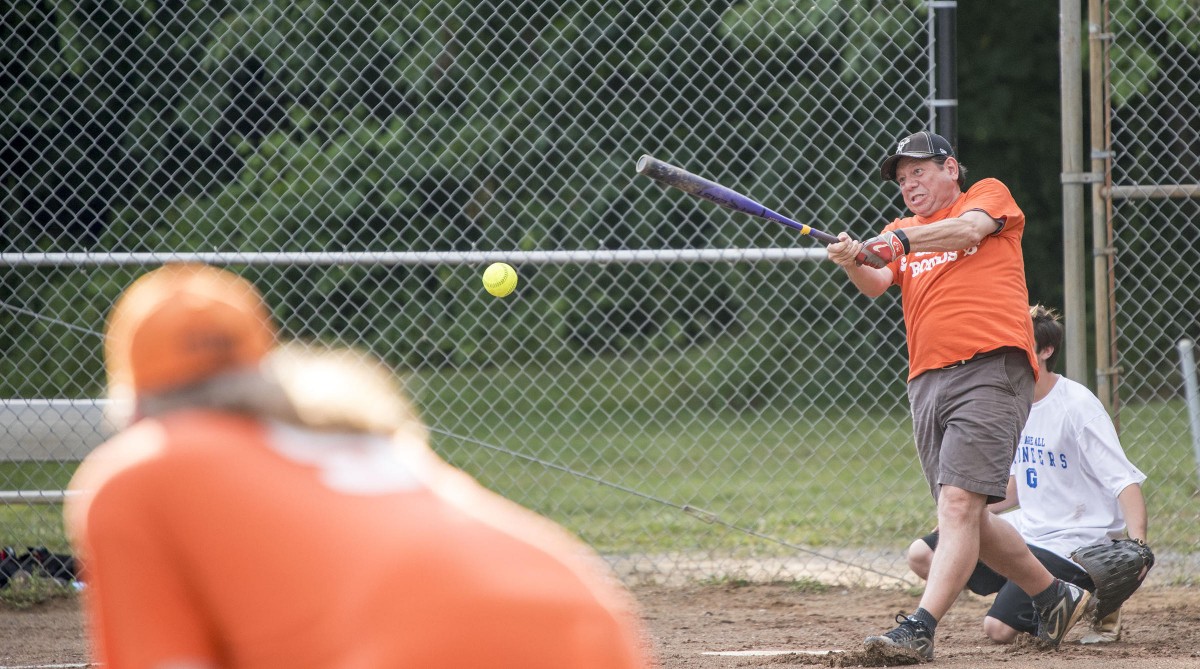 It’s an early August evening on Libertore Field at White Park in Morgantown. The orange prison jumpsuit jerseys of Chico’s Bail Bonds are impossible to miss — and so is our play. But, that’s not necessarily a compliment.

On this evening, the team loses in typical Chico fashion.

The team name, of course, comes from the 1976 film The Bad News Bears, in which a down-and-out and cheap beer-swigging Walter Matthau coaches a group of rag-tag Little Leaguers and tries to whip them into shape.

Morgantown’s Chico’s aren’t too far off from their fictitious counterparts.

On this night, there are flashes of defensive greatness in the outfield from Chico veteran Sean Kelley and rookie Dave Lawson. A few Chico batters turn infield errors into a few runs, thanks to some heads-up baserunning.

We hold our own against an outmatched and much younger rival, Gene’s Beer Garden, only to crumble when we needed to come through.

But all isn’t lost, as it never is with Chico’s. The night is still young. Win or lose, the team had yet to get to the best part of the Chico’s game-night experience. 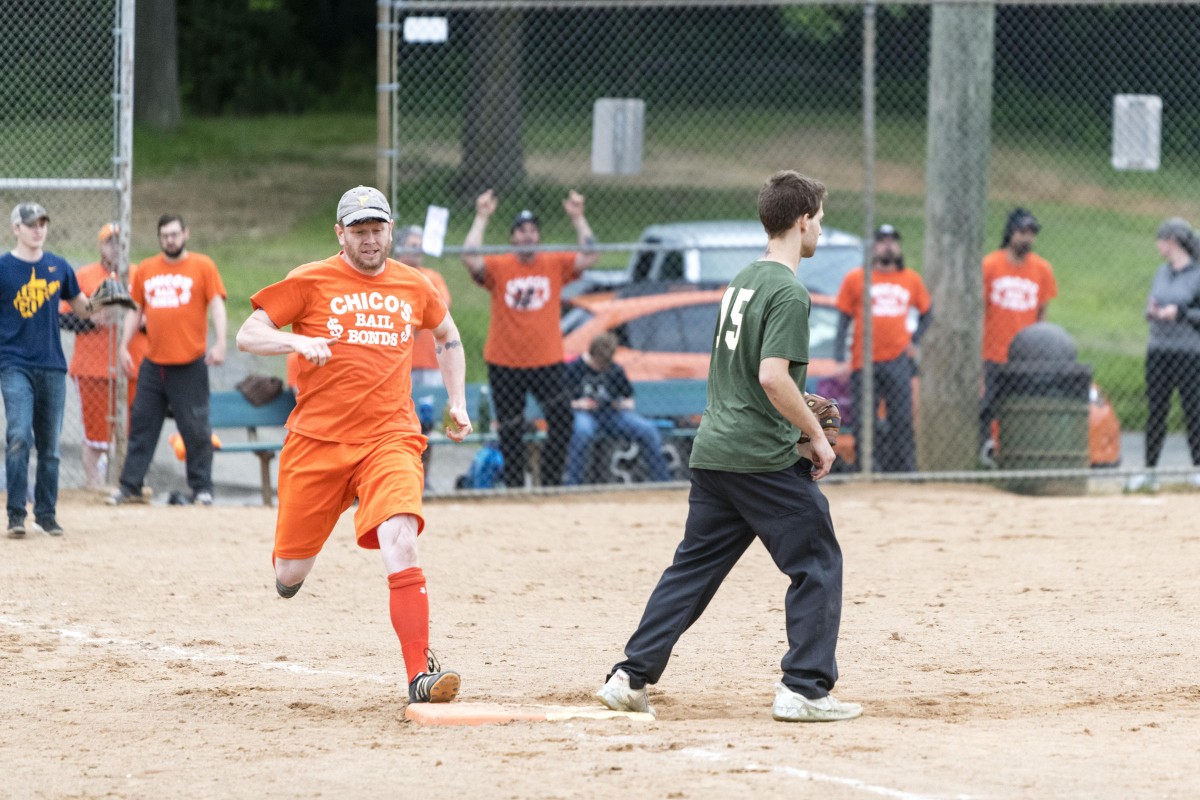 I found myself a part of this group of gentleman misfits somewhat by chance, but looking back on it all, it makes perfect sense.

It was a Wednesday night in late winter or early spring of 2017, and I had popped into 123 Pleasant Street after a long day at work. I sat down, looking for some sort of reprieve from the heaviness that can be my job. I stopped in to catch up with my friend, Tyler Grady.

“You said, ‘Hey dude, is there a softball team around here or anything?’ And I don’t remember if I even said anything other than, ‘Come with me — follow me right now,’” recalled Grady, a Morgantown musician, car salesman, entrepreneur and a bartender at 123 Pleasant Street. 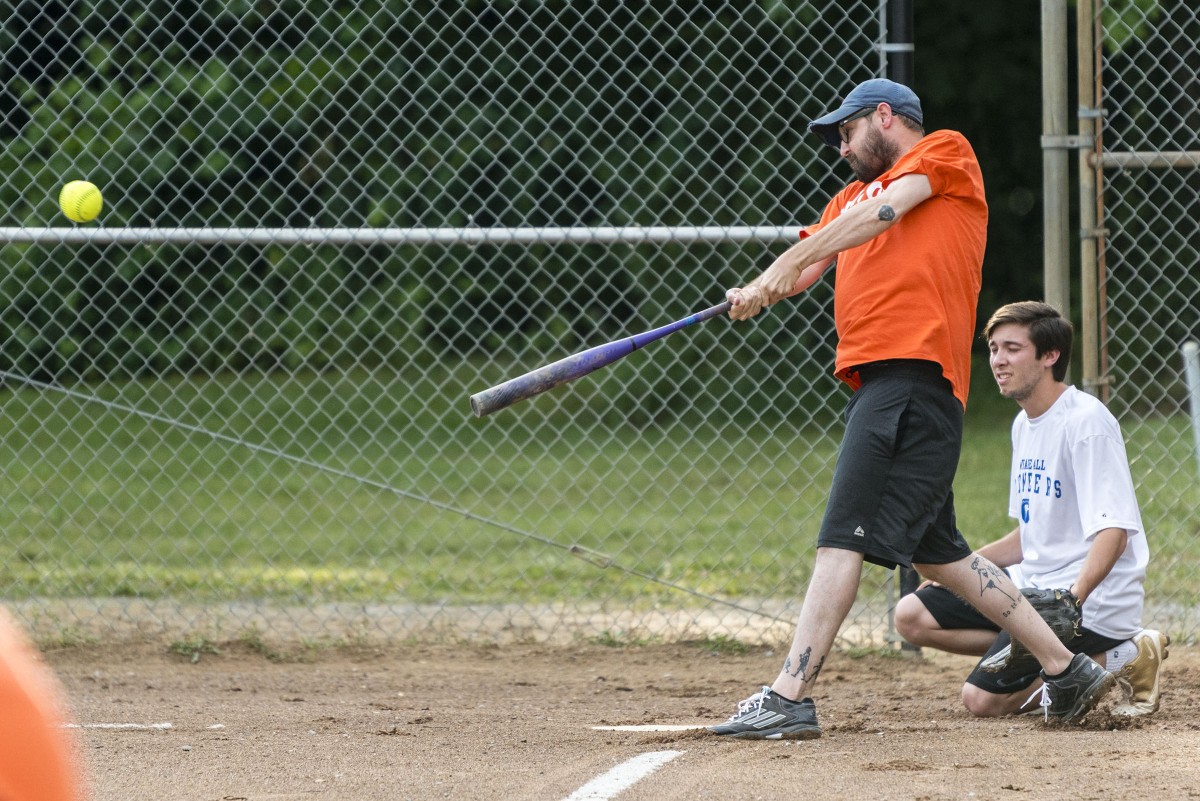 Chico’s part-time first baseman and the author of this article swings mightily at a pitch on June 16, 2017. His arms do not normally appear this muscular — although, they do in this photo because of pure grit, determination and zen-like focus. Photo: Jesse Wright/West Virginia Public Broadcasting

“We walked around the bar and I took you downstairs to the lower bar that was not open at the time. I stood up on the liquor shelf, I climbed up and I got down our trophy that was given to us — the Olivia Newton-John trophy, our 0-and-23 trophy. And I was like, ‘The greatest softball team of all time is here,’ ” Grady, who plays right field, remembers.

The Olivia Newton-John trophy is a reference to Tommy John surgery — a procedure baseball pitchers undergo after tearing a tendon in the elbow of their throwing arm. Any baseball fan surely would get the joke.

I immediately understood the sense of humor that informed Chico’s. I could also tell I didn’t necessarily have to be good — this was about goofing off and having fun.

But Chico’s is an institution — with a history far longer than my two-season career platooning at first base.

Among the many stories of Chico’s lore include a player being picked up from jail to make a game, a player buying an orange Miata and getting a vanity license plate with ‘CHICO84’ and strange nicknames like ‘Meatball.’

A Staple of Morgantown Softball

With just one season under their belt as the Nyabinghi Dance Hall, the team took on the Chico-moniker 20 years ago — in 1998 — the same year the bar took on the name of its address, 123 Pleasant Street.

Morgantown native Louis “LJ” Giuliani took over ownership of the bar and sponsorship of Chico’s. He says Chico’s immediately embodied the open-minded identity of 123.

“It doesn’t matter if you’re white or black, straight or gay, or whatever. It’s all kinds that take the field when Chico’s takes the field,” Giuliani said, noting that 123 held the same values from the beginning.

Chico’s utility player Jon Vehse, who works in construction and other odd jobs, remembers the early days of 123 Pleasant Street the same way. 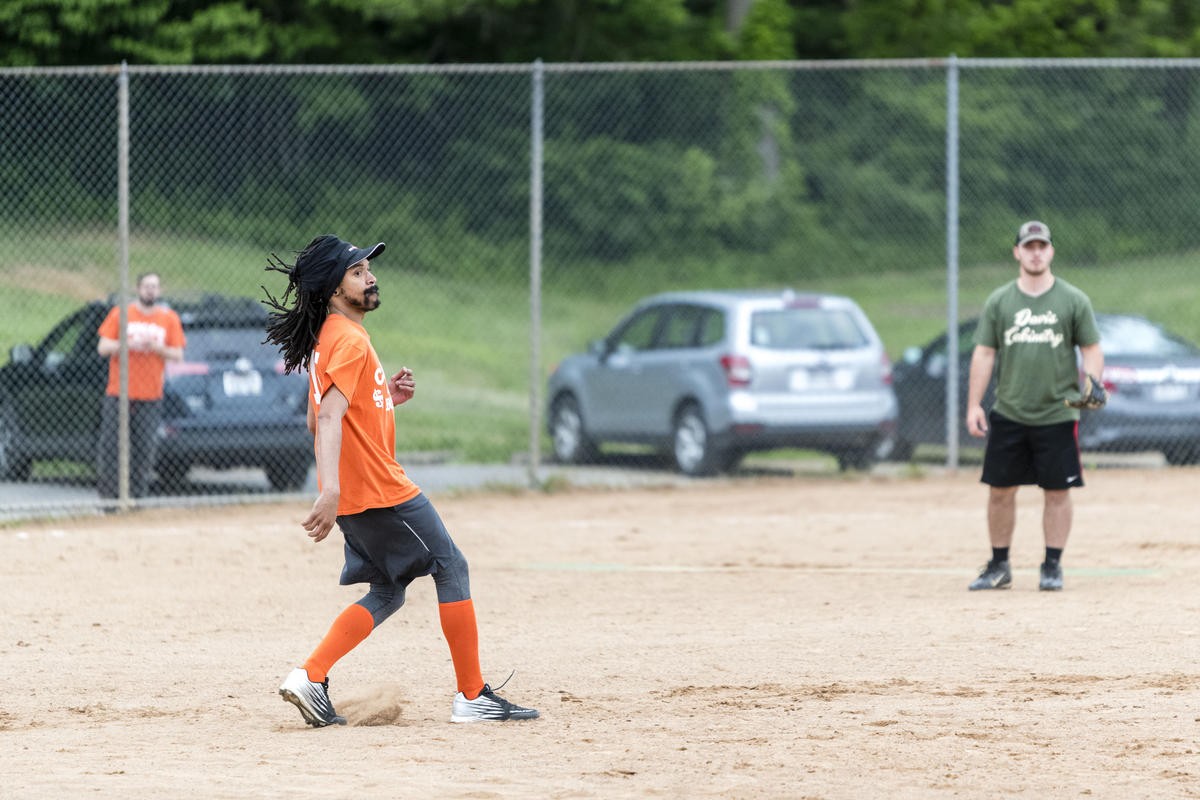 Chico’s rookie right fielder Dave Lawson rounds first base during a June 6, 2018 game against Davis Cabinetry. The game proved to be the only outright win for Chico’s during their 2018 campaign. His dreadlock-friendly hats and visors are known on the team as a “helmet.” Photo: West Virginia Public Broadcasting

After 20 years, many Chico’s have come and gone from the team and from Morgantown. But even those who have moved on still stay connected to the team and look back on the early days with fondness.

“It was probably, really, to do something healthier besides sitting in the dark bar. I think to go out and do something that was more participatory and less spectator-driven — because, we all sat around and watch baseball together at that time. So, it was nice for us to go out and do something [and] get out in the sun and see the day together,” said Greg Leatherman, a journalist now living in Florida who was around when the team began.

“A lot of the players that they grabbed on to just happened to be musicians. Brian Porterfield, Tom Batchelor, you’ve got Jeff Goodwin who is a musician. He’s playing on the team now,” said Giuliani, recalling some of the players who have exercised their musical talents from the stage at 123 and other local venues.

Softball wasn’t their first talent — nor their second, third or fourth, Giuliani said with a laugh. 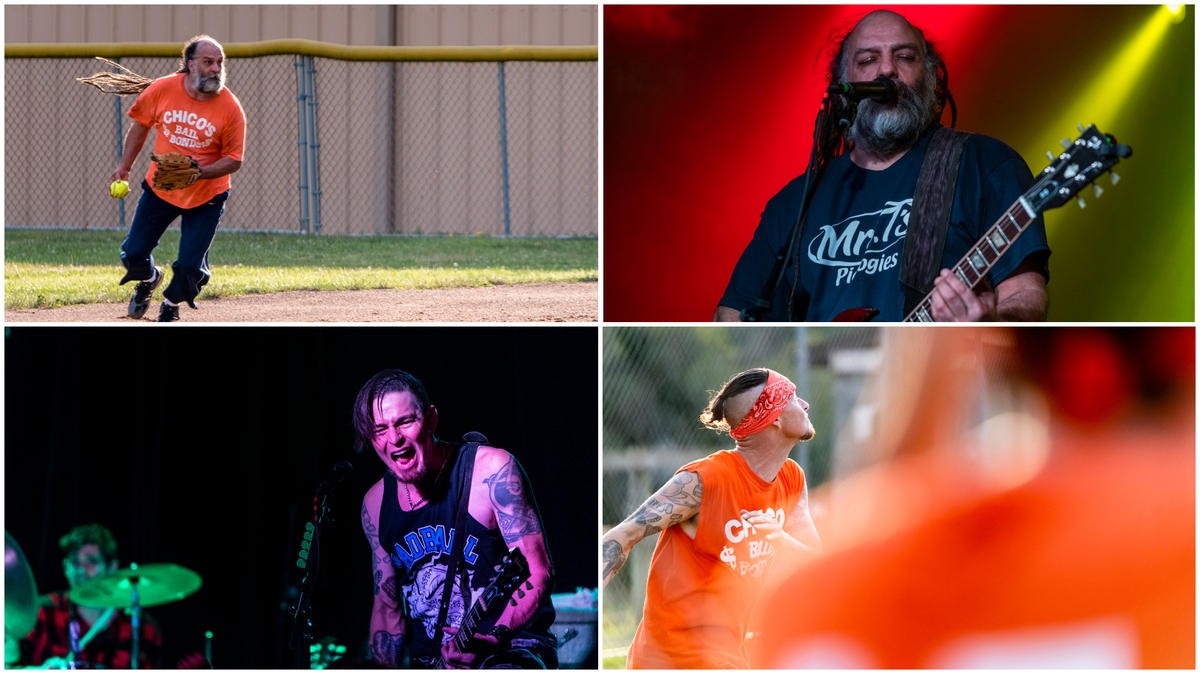 Top photos: Tom Batchelor is well known around the region for his work with rock and reggae groups like Rasta Rafiki and The Tom Batchelor Band, as well as his time as a Chico. Bottom: Jeffrey Goodwin has been a part of punk and metal bands such as Law Biting Citizens and Ghost Road. Photo: Jesse Wright/West Virginia Public Broadcasting

“It was a way to bring like-minded folks [together] that liked talking about music or art or how many shots of Jameson they had. It was based more on like-mindedness,” he explained.

Following each Chico’s game, as it has been since the beginning, the Bonders gather at 123 for cheap beers like Black Label and Pabst Blue Ribbon — and, as Giuliani mentioned, celebratory shots of Jameson.

For Vehse and other Chico’s, the post-game celebration is the perfect cap — with seemingly disparate people milling about, discussing music, sports, politics and sharing stories of life’s misadventures.

“More often than not, it is the highlight of the evening. But there’s there’s just a certain camaraderie. I think there’s a genuine affection between people,” he said.

Among Chico’s, Vehse is known for his love of curating the music from the jukebox in the lower bar.

“From Beethoven to Bob Wills, from the Rolling Stones to Prince Far I. There’s everything on that jukebox. It is an eclectic evening. It is awesome,” Vehse said of the musical selections. 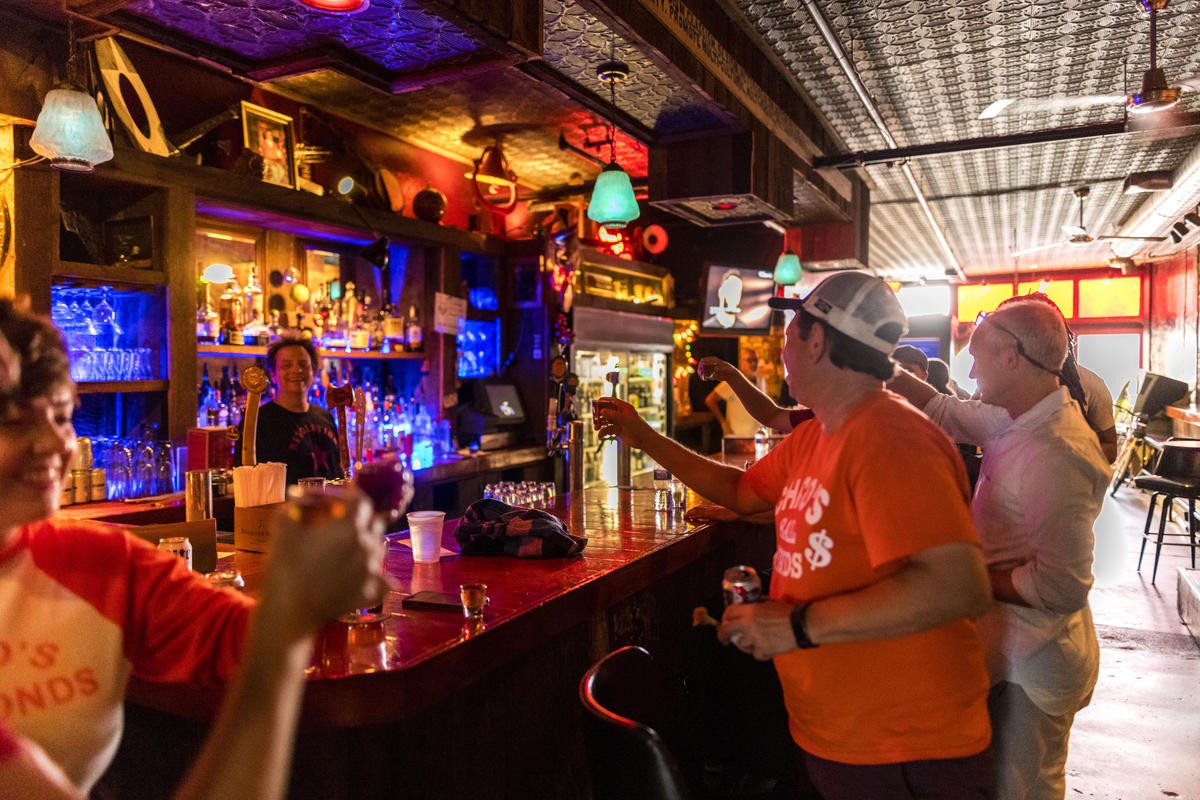 Chico’s shortstop Jim Antonini (center) and loyal fans hoist a shot of Jameson at 123 Pleasant Street during a post-season party to celebrate a successful 3-25 season. With an expanded roster in 2018, it’s possible the Bonders broke a single-season record for most fluid ounces of alcohol consumed. Photo: Jesse Wright/West Virginia Public Broadcasting

But, even after a few drinks at 123, a Chico’s game night isn’t over until it’s been recapped and shared on the team’s Facebook group.

Part comedy, part mythology, the game write-ups exaggeratedly highlight the ups-and-downs over an always hard-fought seven innings. If Chico’s doesn’t get clobbered into a 10 or 15-run mercy rule before getting through all 7 innings, that is.

“There’s three of us that have kind of done this and that’s myself, David Forman and Jim Antonini,” Greg Leatherman said. “And, basically, it is sort of like the literary connection to Chico’s softball team — is that we’ve always captured the games win, lose or draw and written up how the game went — in both a serious, professional, sort of sportscaster way but also with a lot of humor.”

“It’s the same story and it’s gotten harder to write them — because, we continue to lose. There’s only so many ways you could describe a loss and drinking beer after a softball game,” Antonini explained.

If you were at any given game, you would know what is and isn’t absolutely true. If you weren’t, well, that’s left to your own imagination to decide. 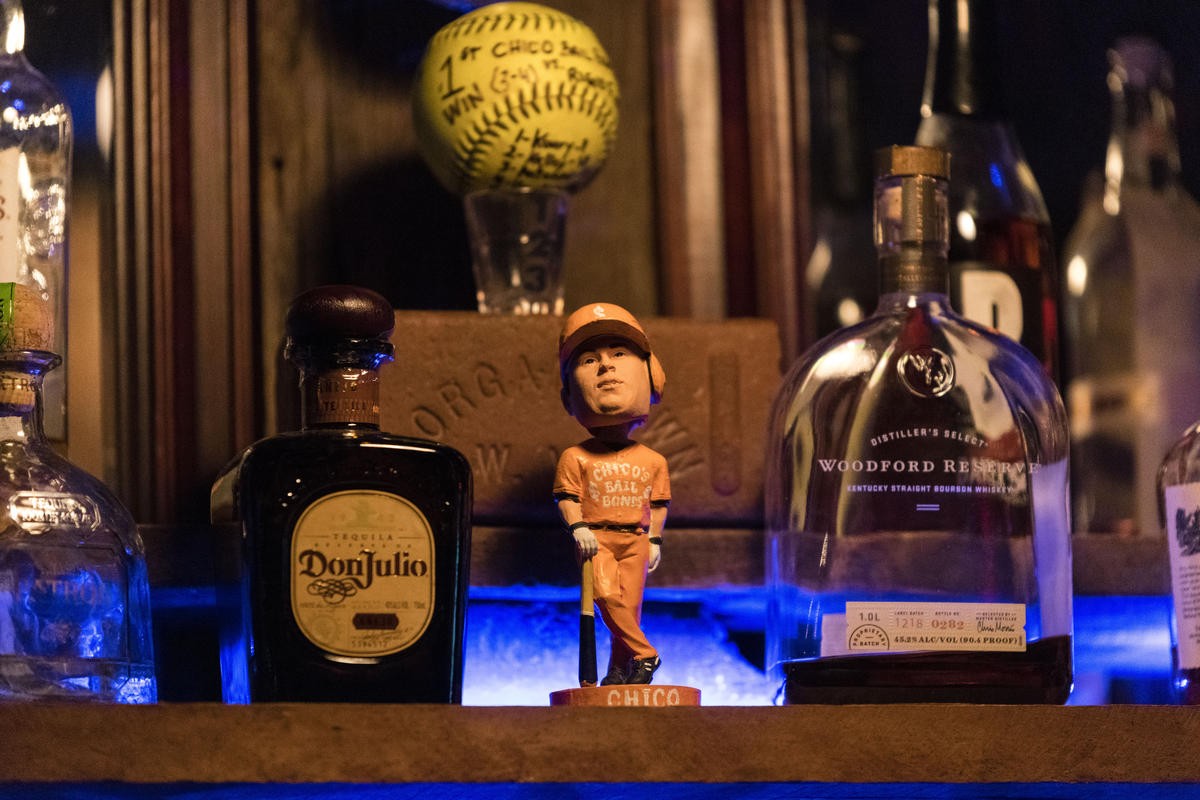 Here’s one of Antonini’s write-ups from a game back in 2011:

The clock struck midnight. Down 19-18 in the last inning with two outs and two Bonders on, hot-hitting Ethan Wells hit deep, majestic drive to center field, bringing the roaring Chico followers to their feet. To the Bonders’ dismay, the Colasonte’s left center fielder dashed out of the darkness and fog of the thick, hazy summer night and made a diving, stabbing, tumbling, catch — ripping the hearts out of the Chico followers and team members.

In disbelief, first baseman Leatherman retreated to his car and wept — not about the loss, but about the pride he felt for his fellow Bondsman.

On this night, Chico’s were everything they had not been this forgettable season: Daring, hustling, bold, youthful. Not wanting to go home, six or seven Chico’s milled aimlessly around the closing 123 bar at 3 a.m.

An exhausted and worn down Vehse stood over the darkened jukebox — with the power long shut off after last call — still trying to make selections…just wanting to hear Peggy Lee sing “Is That All There Is” one more time.

Another Losing Record, But No Giving Up

Chico’s finished their 2018 campaign with a record of 3 wins and 25 losses. Two of those wins came as a result of a no-show forfeit from the opposing team, while the third came on a gloriously executed 7 innings against Davis Cabinetry.

Such a pathetic record should make anyone reconsider their motivations to keep playing softball. But, if you can’t tell, Chico’s isn’t about winning. Antonini says no matter what happens over the course of a season, it’s hard to imagine hanging it up. 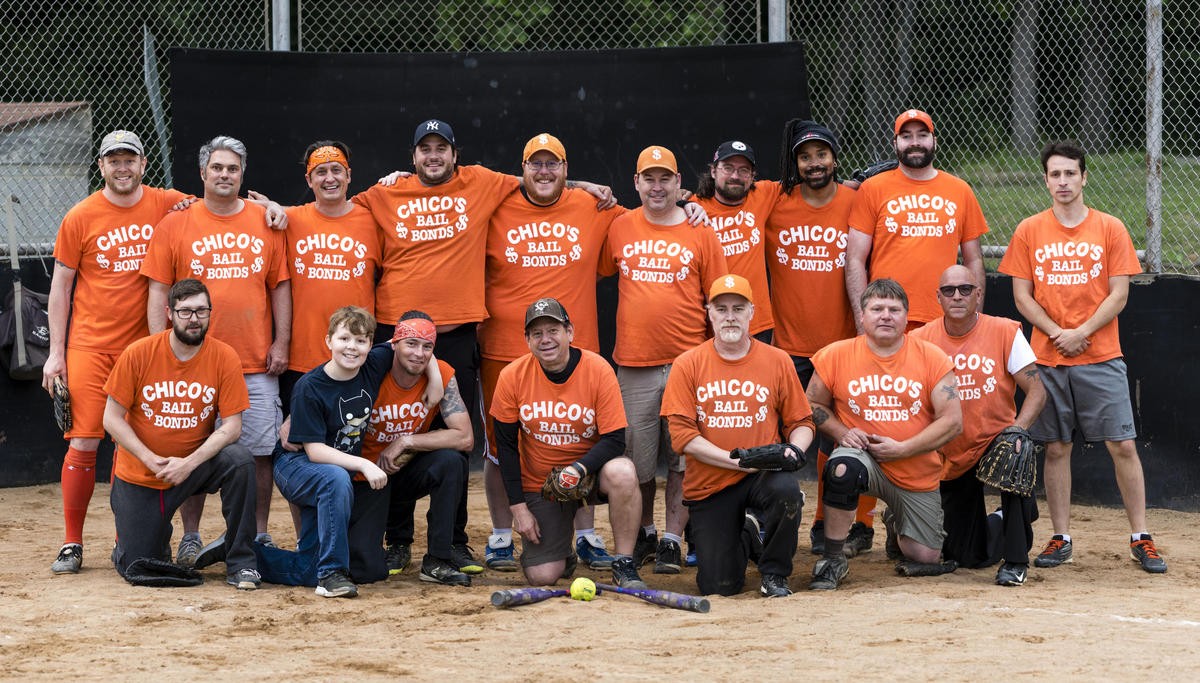 Chico’s Bail Bonds poses for a team photo on June 16, 2018, following a win against Davis Cabinetry. The game served as the team’s only outright win of the 2018 season. Photo: Jesse Wright/West Virginia Public Broadcasting

“I think every year there’s a point in the year — probably after you’ve played 18, 20 games and it’s like ‘Why are we doing this?’ We come out and sometimes we really get humiliated,” Antonini said. “But, then, the game ends and then you get together and everybody has a few beers and then it’s it doesn’t seem that bad. It’s a pretty good way to spend a night.”

Giuliani, despite having not played in recent years, feels the same.

“Chico’s is kind of a state of mind in the sense that we’re not here to judge, we’re here to support and we’re here to spend time with each other. And that’s the bottom line. We’re a softball team that’s more of a social club than an actual softball team,” Giuliani said.

So, if you ever find yourself around 123 Pleasant Street surrounded by orange softball shirts, you’ll know you’re hanging out with the Chico’s. Buy a few of them a drink and strike up a conversation. After all, we assuredly just got beat.