My first and only newspaper internship was during the summer of 1987 at the now-defunct Charleston (W.Va.) Daily Mail.

I was a graduate journalism student at West Virginia University and a native of Charleston, so it made sense to work at my hometown paper. What didn’t make sense were the hours. The Daily Mail was the evening paper — yep, that was a thing — published just after noon each day. Which meant I and all the other journalists had to be in the office by 6 a.m. or so to get the paper out.

I was not a morning person, but had to be one for three months. I was not the greatest news reporter — back in this Jurassic Era, reporters were supposed to keep opinion out of their copy and I had trouble with that — so the newsroom leadership of Nanya Friend and David Greenfield transferred me over to the editorial page where, under the nurturing eye of great opinion writers such as Hannah Maurice (her father, Jack, had won the Daily Mail’s sole Pulitzer Prize in 1975), I learned the craft of editorial writing, which suited me better, despite my lack of qualification.

Two years later, when it was time for me to get a real job in journalism, I was offered a reporting slot at a small newspaper in northern Michigan. Not only did the weather argue against the gig — the editor’s no-kidding sales pitch: “The ice fishing here is great!” — it was an evening paper. So that meant I’d be driving to work at oh-dark-hundred in a climate where ice fishing was possible for about $15,000 per year. I graciously (I hope) declined the offer and looked elsewhere.

Later, I glibly joked to my friends in journalism that I was rooting for evening papers to go out of business to reduce the chances I’d ever have to work at one.

In 2015, the Daily Mail effectively ceased publishing, when it merged with the morning Charleston Gazette. Good people lost their jobs when that evening paper went out of business. In January of this year, the Gazette-Mail filed for bankruptcy and was purchased by HD Media, publisher of the Huntington Herald-Dispatch. More good people lost their jobs. I regret the glibness of my callous youth.

Today, the Gazette-Mail remains as the lone paper in the state capital. For the sake of transparency, I must disclose long-time friendships with staffers there and at the Herald-Dispatch. I am hopeful the initial cost-cutting job reductions were the only ones coming, and that the new owner, businessman and former state delegate Doug Reynolds, will give the paper the runway it needs to make the changes required to produce top-shelf journalism and be profitable in this digital publishing age.

There’s no secret that the business of newspapers needs to change. The first blow came when the internet killed newspaper classified advertising, which was almost pure profit. Second came the demise of display advertising combined with the death of department stores, which were big-bucks advertisers. Many newspapers had virtual monopoly markets around the country and could charge what they wanted for display advertising — which was made all the more valuable because newspapers had limited inventory, or space, for ads. This drove prices higher, as advertisers had to outbid each other to be located at the top right-hand corner of page 3, for instance.

But as online-only publishers flourished, with their limitless inventory, that competitive advantage for newspapers ceased. Correlated to this, the limitless inventory meant online ad rates had to be lower, so advertisers left for the internet, where it was cheaper and, frankly, more effective to advertise. If you buy an ad in a newspaper, you have no idea who saw it. But if you buy an online ad, you can tell how many people saw it, clicked on it, where they live, and so on.

This has forced newspapers, and this is a good thing, to become entrepreneurial and develop new revenue streams. Many have gone into the event business, leveraging their brand status as thought and culture leaders, and they stage music festivals and ideas seminars. Most major papers, such as The New York Times and Washington Post, have paywalls that close after a certain number of free views, or that protect more valuable content. Others, such as Crain’s Business in Detroit, have tried membership models, which enables readers to pay more for access to the most valuable content and to events.

Others create readership by aggregating popular free content and build revenue by charging for high-demand content, often on a tiered model, like basic and premium channels on cable TV.

At a macro level, I believe the new Gazette-Mail should move toward a digital-first strategy. It no longer publishes a Monday print edition and should consider phasing out all print publication in the coming years. As it probably already has, it should stop thinking about “readers” and start thinking about “audience,” and how to grow it. Reporters, editors and photographers alone will no longer do the trick. Newspapers must meet the audience where it lives, and that will require hiring audience-engagement editors, social media experts and product engineers.

Regarding journalism, the Gazette-Mail must continue to offer its most important accountability reporting — watchdog journalism that keeps government, businesses and all institutions honest and that informs the citizenry — for free.

But it should also consider tiered, paid access to other content that is popular but not instrumental to democracy, such as coverage of West Virginia University football and basketball. Online-only sites, such as CBS’s 247 Sports network, which has free and paid coverage of Mountaineer sports, proves there is a West Virginia audience willing to pay for top-quality reporting on WVU — and probably Marshall — sports.

The Gazette-Mail must explore all forms of revenue-generation — almost nothing should be off the table. This means that Gazette-Mail journalists and ad people should sit in the same room and decide integrated news coverage and ad plans. This doesn’t mean selling access to news stories or watering down coverage, but it does mean that the old days of an impermeable wall between news and advertising are over. Many news outlets, including the New York Times, work with advertisers to create high-quality sponsored content that, yes, advertises the brand but also provides high-value information. As long as it is clearly labeled as sponsored content, there is not one thing wrong with it.

At my first newspaper job, it was considered a badge of honor by editors if a reporter’s story so angered an advertiser that they pulled their ads from the paper. Can you imagine that in any other business? An employee actively working against the interests of its employer? And keeping their job? I’d like to think that kind of arrogance ended long ago, and probably did, along with 20 percent profit margins.

Recently, New York Times Editor Dean Baquet said that President Trump’s attacks on the mainstream media are not journalism’s greatest problem. “We’re big, we can stand it, we can even thrive, and it can even inspire us,” he told CNN.

Instead, he said, citing the ongoing gutting of The Denver Post, it is the death of local newspapers. “That means things won’t be covered, school boards aren’t being covered. This is a crisis in American journalism,” he said.

He’s right. There’s no doubt that city halls and school boards and even statehouses all across the country have fewer newspaper reporters covering them than they used to. That’s why it’s so important that the new ownership of the Gazette-Mail explore every ethical and efficacious revenue-generating opportunity to ensure that the residents of West Virginia continue to get the journalism they deserve and need.

All of the newspapers I worked at have either shut down or been demolished. Even The Washington Post, where I spent 18 years, tore down its fabled building and now rents space. But like an animal that sheds its old skin, that move — along with benevolent billionaire Jeff Bezos’s cash infusion — has allowed The Post to evolve into a digital powerhouse while expanding and improving its journalism.

On a smaller scale, I’d love to see the same thing happen in my hometown. 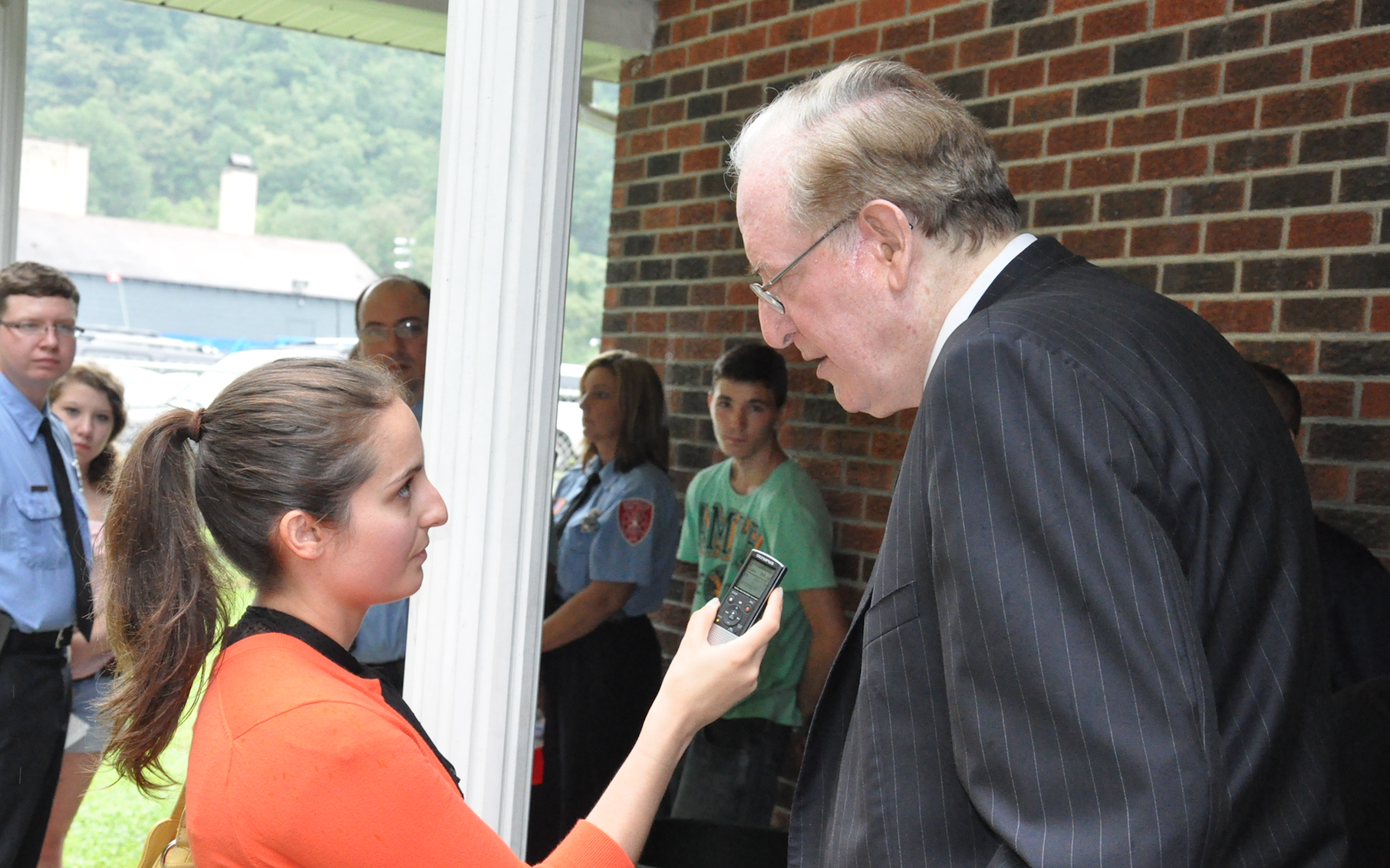 There’s no singular reason the 2016 presidential election results turned out the way they did. But, within days…
byPaige Lavender