Dr. Norma Thomas carries a microphone as she walks the streets of Uniontown, Pennsylvania’s East End. This is the “before times,” before COVID-19, and as Thomas recounts the local history of the East End neighborhood, more than 100 people follow closely behind. Others poke their heads out onto their front porches to see what the commotion is.

“We’re walking in the community. I’m on a microphone, and I didn’t realize how far I was projecting,” Thomas remembers. “I mean, we were going and people were coming out to figure out, ‘What is she doing?’”

What she’s doing is leading a walking tour of Uniontown’s storied Black neighborhood. On the two occasions Thomas was able to lead such a tour before COVID, she took her participants to the neighborhood churches, the funeral home and to Clearview Cemetery.

The walking tours are just one of many ways Thomas and her daughter Dr. Raina León are working to preserve the town’s Black history. In 2019, they founded StoryJoy as part of their efforts, a consulting and educational agency that works to “support the development of scholars, human service providers and creatives, particularly those coming from historically marginalized communities,” including BIPOC, LGBTQ+ and disabled communities, according to the organization’s website. Through StoryJoy, the four person team conducts workshops on topics like diversity, equity and inclusion, creative practices, genealogical research, dissertation/tenure document reviews, and feedback and individualized coaching for leadership and creative growth.

StoryJoy is about education in so many aspects, León explained. Thomas, who has a doctorate in social work and León, who has a doctorate in education, have decades of experience teaching in college and high school classrooms between them. Collecting, preserving and sharing the Black history of Uniontown is part of that educational mission because, Thomas says, most people who live in the community – who have lived there for their entire lives – don’t even know that Black history exists.

Clearview Cemetery is an example of that lack of knowledge. One of three cemeteries in Uniontown where Black people could be buried when it was established in the early 1800s, it’s the resting place of more than 500 people, including more than 100 veterans stretching back to the Civil War. Thomas’s father worked as its caretaker for a decade before his death in 1996, but now it’s more than 5 acres are cared for by a single man on a volunteer basis.

“And if you ask most people in town, they don’t know it exists, even though every Black person in Uniontown has a family member there. They all do,” Thomas says.

But León recognized that that experience, that lack of knowledge about family and community history, isn’t unique. León says much of her early knowledge and exposure to Black history in America came when she went to college. Thomas’s experience was the same.

”But we know from our family – especially genealogical research – that our family has been [in Uniontown] for over 200 years,” León says. “So talk about erasure and the lack of centering, lack of putting importance on our people. And I think that that’s important to push back upon.”

Thomas believes she and her daughter’s experience in Uniontown is indicative of a larger issue in the nation – a lack of importance placed on Black stories. And in Appalachia, Thomas says, those stories get lost more often when people both inside and outside the region overlook Black populations of the past and the present altogether.

“So, what’s the danger? The danger is that a lot of [Black history] is already lost. And what we’re trying to do is make sure people know about this history,” Thomas says. “The danger is that if we don’t do a good job of bringing it to the forefront, it will just be lost forever.”

Much of Uniontown’s Black history lives in newspaper clippings and in photographs locked away in boxes and binders in the homes of the town’s older generations – personal libraries of each Uniontown family’s history and, therefore, the town’s history. But as those community members pass, Thomas says, they take those stories and that history with them.

“Every time an older person dies, you lose a library,” Thomas says. Their families don’t understand the importance of what their elders have collected and they often throw out decades of collected newspaper clippings, photographs, books and other paper items.

“I’m not a collector of things, but I am a collector of history. There have been a few people who have luckily not thrown all this stuff away and have donated some of their history in trash bags [to us].”

Thomas then sorts through the contents and categorizes them. She’s organized the resources into the mobile displays of the Fayette County Traveling Museum. The museum features poster boards and easels with stories and newspaper clippings detailing the early history of African Americans in Uniontown, both enslaved and free, as well as information on the cemeteries, the Underground Railroad stop in the East End and prominent Black community figures. Part of the museum also details the presence of the Klu Klux Klan in the area, which Thomas says people don’t realize how large it was in Uniontown.

Her process for compiling the traveling museum is to “get as much as I can and then organize it,” Thomas says.

Prior to the pandemic, the traveling museum would be set up at local schools and churches, encouraging young people to attend to explore their history. However, COVID-19 has forced Thomas to stall museum showings. She hopes that in the future it can have a permanent home in the basement of the John Wesley AME Zion Church, a “freedom church” that also houses that entrance to the Underground Railroad.

“We’re just trying to make people aware because it’s not only preserving history, but it’s for the benefit of the future,” Thomas says. “Because young people just have to know that they come from somewhere and they come from somebody, and that there’s this great history.”

Black and other minority communities across the country have consistently been hit hardest by the coronavirus, and Pennsylvanian communities like Uniontown are no exception. According to the COVID-19 Tracking Project, a project of The Atlantic that aggregates official state data, 11 percent of Pennsylvania’s population is Black, but accounts for 14 percent of the positive cases and 12 percent of the state’s deaths due to the virus.

Explore our series with Tarbell on the racism in the health care industry, and COVID-19’s impact in BIPOC communities here.

León says  this causes an “exponential increase” to the danger of losing even more Black history, especially in communities like Uniontown.

“We have so many elders who are now expiring, who are now becoming ancestors because of a health crisis right now and our larger governmental non-response to it initially. There’s no consideration about where records go,” she says. “It is a scourge, a sudden scourge. There’s so much that’s lost in that.”

While COVID-19 has limited their collection and interactions, León has encouraged her mother to continue preserving history in other ways. She pushed Thomas to sit down in front of a camera and record herself telling some of Uniontown’s stories in her own words, including the story of the Black cemeteries and a more complete oral history of the East End neighborhood.

Thomas admits she was reluctant at first, but, since, she’s adopted the method and asked community members to record their own retellings, including the current Clearview Cemetery caretaker and a series on African American churches in Uniontown.

“And I love that part of this [is this] emergence of guerrilla archivists,” León says. “[There are] technological tools, editing tools that are very accessible to a lot of people, and even if it’s not the best quality or the best sound, it’s still there.”

While these videos exist for a wide audience, they had children who are currently learning at home – because of COVID-19 or homeschooling – in mind while creating them. StoryJoy, León says, wants to close the gap of knowledge of the community’s Black history and their work can provide learning opportunities.

“I think that there is a hunger for families of a diversity of resources to augment their learning practices because there is this feeling of, ‘We’re not in person and what are we losing?’ And we’re losing so much,” León says.

But one of the places learning can expand beyond traditional classroom lessons, León says, is in their local Black history, and COVID could provide an opportunity to change the way those lessons are accessed by students and adults alike in the long term.

That’s why she and her mother are still documenting the history of Uniontown and their family as they find more information. They’re also working closely with a traveling museum in Chester, Pennsylvania, who is also preserving African American cemeteries in Delaware County as a way to build a network and serve as a reference for other communities hoping to do the same.

“It takes a commitment and hard work and it’s a lot of your own money, but in the end, it is so worth it,” Thomas says. “As long as somebody speaks a name, that person never dies. So, as long as you keep the history in the forefront, our ancestors never leave. But once that history is lost, then those ancestors are lost, too.”

León adds, “Once our ancestors are lost, so are we.” 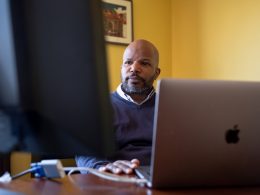 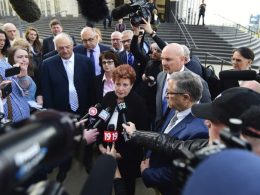 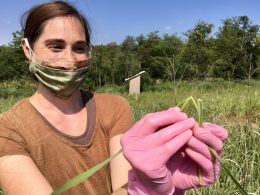