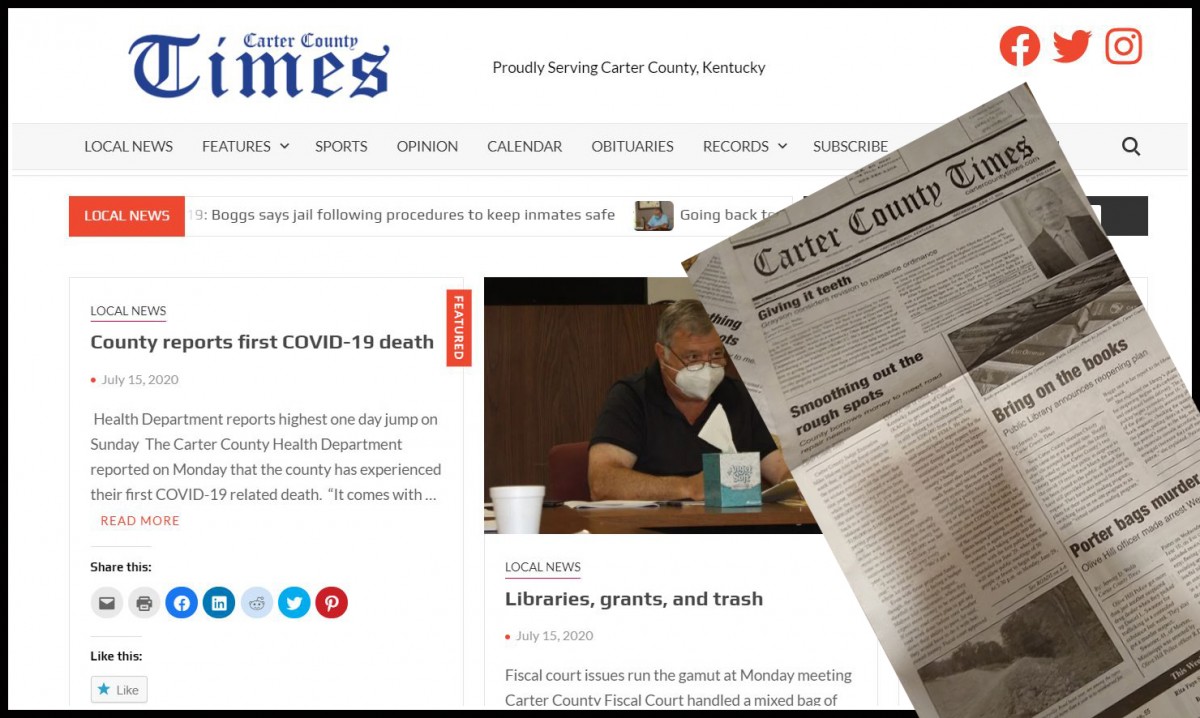 As a one-man reporter for two newspapers in Carter County, Kentucky, Jeremy Wells never had time to cover school board meetings. Wells was an hourly employee for CNHI, the corporate entity that owned Grayson Journal-Enquirer and Olive Hill Times. Since the company never sprung for overtime, Wells didn’t make the evening board of education meetings.

When CNHI decided to shutter both papers, as well as Greenup County News-Times in adjacent Greenup County, an opportunity arose. Out of work and therefore no longer worried about the company dime, Wells finally attended a school board meeting.

“They were talking about fall plans for school, and that’s important to parents and guardians in the community,” Wells said.

With the help of his fiance, Nicole Winkleman, Wells had a place to publish the article he wrote about the meeting. The couple created the Carter County Times, a web-based newspaper startup. Within 48 hours of publication, the story had 4,027 views. Carter County has about 27,000 residents.

Community newspapers have faced challenges for years. Between 2004 and 2019, the United States lost 2,300 newspapers. But the pandemic’s jolt to local economies have pushed more over the edge. That creates problems for communities that lose their local news.

“We do a real disservice to our communities by not telling the stories of people doing the heavy duty lifting in their communities,” said Jack Shuler, associate professor of narrative journalism at Denison University and editor of Between Coasts, a magazine that covers stories from under-served places.

In two small northeast Kentucky counties, journalists who were laid off when their publications closed are starting their own businesses to fill the local need for news and information.

Wells credits Winkleman for getting the ball rolling for the Carter County Times. Since losing his job, “I’d been moping around,” Wells said. Winkleman has a demanding full-time job and the couple has a toddler son. But she found time to register the business and build a website.

In Greenup County, another set of laid-off journalists took on a similar project. When CNHI informed Cathie Shaffer and Mason Branham that their paper, The Greenup County News-Times, would be closing, Shaffer looked at Branham and said, “You ready to quit yet?” When he said, “No,” she replied, “Then let’s start a paper.”

Shaffer and her daughter-in-law, Amy Shaffer, quickly created a business plan. Cathie Shaffer and Branham, a long-time sports reporter in Greenup County, would focus on content, and Amy would become the official publisher of The Greenup Gazette.

Why do these journalists think they can succeed in publishing a local newspaper when a large corporation like CNHI couldn’t? In a word, proximity. Although CNHI has plenty of resources, they don’t have community connections like local journalists do, Wells wrote in an op-ed for his new publication. “We live here,” Wells wrote. “We care about here. We think it’s important you know what’s happening here.”

But it will take work to translate community connections into revenue. To be viable, the couple is counting on becoming the county’s paper of record.

As the paper of record, they would be eligible to receive the revenue from legal ads. These include notices that individuals must post as part of legal proceedings like probate. They also include notice of public meetings and other announcements by local governments.

“Anytime they need to run a legal notice or the county clerk runs a delinquent tax list,” Wells said, “it can run several thousands of dollars. The city of Grayson spent around $50,000 to place legal ads last year.”

“To comply with Kentucky law, we also need an office in the area where we can hang a sign,” Wells said. He has a relationship with the local Friends of the Library, prompting the local library to donate office space.

Unlike Wells in Carter County, Cathie Shaffer didn’t have to find a new building to hang her shingle. The day she learned that CNHI was shutting down their operations, Shaffer called the landlord of the very building they’d always worked in. Since word spread that Shaffer was starting a new paper, people have come to the office and asked for subscriptions. Right away, 110 residents signed up.

Shaffer intends to keep the paper afloat with a combination of advertising, subscriptions and legal notices. Shaffer’s experience building websites and running a small publishing company will also help The Greenup Gazette use technology to engage with their readership.