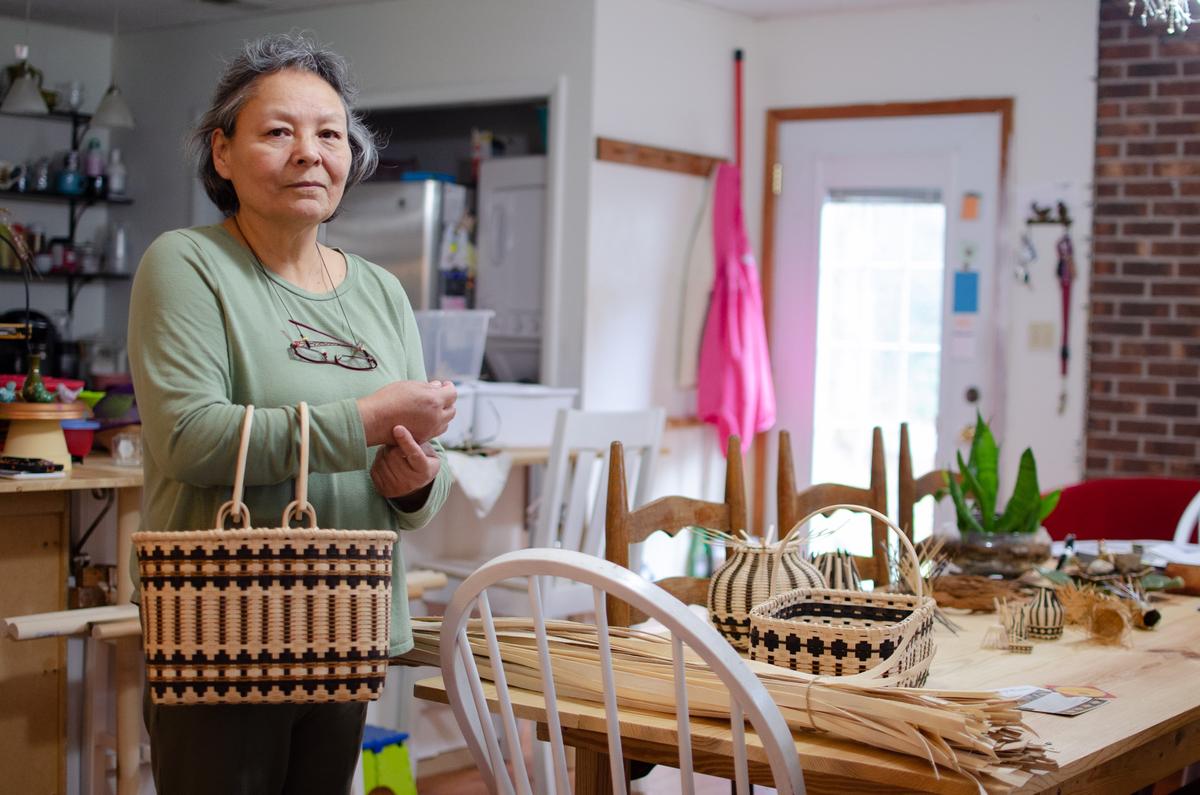 The Eastern Band of Cherokee Indians have been making baskets for centuries. While it is an old artform, basket makers are resilient — adapting to changes not only in their craft, but their traditions too.

From imagining new designs to dealing with hard-to-come-by materials, basket makers are dedicated to keeping their craft alive. In a special report as part of the Inside Appalachia Folkways Project, Rachel Greene spoke with two women in Cherokee, North Carolina, doing just that.

Some artists hone their skills in classrooms. Others, like Betty Maney, are practically born into their art. She is a small woman, with a kind, round face and short grey hair. She is a renowned weaver of white oak and river cane baskets, and a member of the Eastern Band of Cherokee.

Like many other Cherokee basket makers, she learned her art by watching her mother, shadowing her as she gathered her materials. “When mom went out to cut her tree down, we went with her. We were with her in everything she did.”

Maney and her siblings were also there when their mom cut the tree into thin, pliable splints. She remembers her mom would lay a scrap of blue jean fabric on her lap and whittle the splints down until they were smooth and ready to be dyed and woven.

Maney, who works out of her home studio in Cherokee, North Carolina, started making baskets in the mid-1990s. Her mom, Geraldine Walkingstick, was a well-known basket maker and encouraged Maney to pick up basketry, too.

“One day my mom says, ‘You need to start making baskets, because if you don’t start making and learning how to weave baskets, it’s gonna die out.’”

Weaving also allowed Maney to make extra money for her family.  She got her start with white oak, her mom’s signature material. She was a natural. Years of watching her mom taught Maney nearly everything she needed to know.

“Looking back, I realized it’s amazing how I already knew,” she says.

According to research conducted by scholar Sarah H. Hill for the book, Weaving New Worlds: Southeastern Cherokee Women and Their Basketry, by the 1930s, ethnographers identified and named nearly two dozen basket patterns traditionally woven by the Eastern Band of Cherokee. The patterns are geometrical and can be somewhat abstract. The flowing water pattern, for example, is made of intersecting splints that zig-zag up the side of a basket. Many are dyed with plants, like walnut or butternut bark, to create color contrast.

Maney relies on that contrast to create her distinct and precise patterns. She likes symmetry, and uses different colored splints to repeat certain elements like vertical lines or “bands” that encircle the basket.

“What I like to do is put a band around the bottom, and as I weave up I put a separation in there by repeating a specific design with some colors,” Maney says. “Then I will repeat the bottom design on the top, so it’s real distinctive when you look at it.”

For Maney, the patterns are a continuation of her mother’s legacy. “My mom’s designs that she used in her baskets live through me and my sister. To us, that’s keeping her work alive.”

Maney finds ways to put her own spin on what she learned from her mom, too. “I call what I do contemporary cultural art. Because it’s always an improvement. You’re always coming up with something different, you’re always making things your own.” Maney uses graph paper to sketch out patterns for weaving baskets and beads. She often uses similar patterns in both mediums and has recently begun using computer programs to manipulate her patterns. Photo: Rachel Greene/ WVPB

Cherokee baskets are unique — they cannot be made just anywhere. Many of the materials used, like river cane or bloodroot, are native to the southeastern United States.

“It’s just something that’s important to the Cherokee, to our culture. It identifies who we are, what we do and why it’s important to us. That was our way of life. That’s how we survived,” Maney says.

She started making baskets during a craft revival in the 1990s. By then, baskets were mostly sold in craft stores to tourists or entered in competitions. In the past, though, Maney says they were mostly utilitarian.

“When I was little, we still needed them for fish baskets, and the small square ones were used as a sieve in the hominy making process to rinse the ash out of the hominy. And then the handle baskets were used for gathering and storage.”

The tourism industry started growing in Cherokee after the nearby Blue Ridge Parkway was completed in 1936. Although baskets were still used in everyday life, basket makers also began selling them to tourists during the busy summer months. Basket making plays an important role in Cherokee’s economy, but pressure from tourism and increased land development have made it more difficult to find basket making materials in the wild.

“The resources — the natural resources — became scarce, and that was largely due to private landowners and development. Like the river cane that grows along the cornfields, the farmers were just plowing it up and burning it,” Maney says.

She is not the only artist to feel the effects of this scarcity. Faye Junaluska is a basketmaker with 40 years experience who has also had trouble sourcing her materials. She comes from a long line of basket makers.

“There’s my great grandma, my grandma, my mother and me. So, I’m a fourth generation myself,” Junaluska says. Like Maney, Junaluska learned the art from her mother, Emma Squirrel Taylor, whose work was displayed in the Smithsonian Museum of American History.

Both Maney and Junaluska work with white oak, which is harvested as a sapling, when it does not have many knots or branches. It takes a skilled hand to determine if a white oak tree is suitable for a basket — you do not know if a tree is usable until you cut it down and look inside. But it can be hard to find in Cherokee.

River cane can also be tough to find. The bamboo species is native to southern Appalachia and grows in large patches called cane breaks. It is also used to make dart guns, a Cherokee weapon, and floor mats. Junaluska does not remember a time when the river cane grew nearby.

Junaluska and her mother had to find new ways to get their materials instead. This usually meant going outside Cherokee, or bartering with other artisans. Junaluska still does that today, trading out materials she gathered or a basket she made for a white oak tree.

Maney has also found ways to cope with scarcity. She uses bloodroot — tiny white flowers that only bloom in early spring — to dye her basket splints a vibrant red. To get that color, though, the petals need to be fresh. Maney and her family have a special way of preserving it.

“We have learned to clean it really, really good, wash all the dirt off, put it in freezer bags and we can freeze it, and it’s still fresh.”

A local nonprofit has stepped in to help too. Revitalization of Traditional Cherokee Artisan Resources, or RTCAR, was founded in 2005 by the Cherokee Preservation Foundation to help protect and preserve resources for Cherokee artists. One of their programs connects artists, including Maney, with landowners who have materials they can use.

Now, once a year, Maney and other basketmakers go all the way to Kentucky to gather river cane through a connection made by RTCAR.

Finding ways to cope with scarcity is crucial for the survival of basket making. It also relies on strong communities and people who work to keep the tradition alive.

“Because you’ve got so many community members, family members involved in the process, from identifying and gathering, harvesting, it passes on that knowledge to them. That way it stays alive,” Maney says. There have been many times that a basket-making technique nearly went extinct, but each time the Cherokee community saved it by teaching and ushering in new generations of basket makers. Maney was one of these novices once, but now she finds herself on the other side of the exchange.

“When somebody asks me how to make a basket, I’m happy to share.”