Food banks and pantries across the Ohio Valley are seeing spiked demand as an unprecedented surge of people continue to file for unemployment benefits, with food banks facing weeks long delays to get certain products. Meanwhile, some farmers are facing a financial crisis, sitting on excess food they can’t sell — food that could be directed to food banks and pantries.

On Friday, the U.S. Department of Agriculture announced a $3 billion infusion to try to get surplus food to pantries. Those funds could eventually be put to use at pantries like one in west Kentucky.

The mandated business closures due to the virus have only accelerated that demand. Her pantry has held drive-thru service to hand out food to the public.

“We ask four questions. One of the questions was ‘How many is in your home, how much do you make, your name and address.’ About 50% of them would cry,” Casey said. “They would be crying, going, ‘I just didn’t know what I was going to do.’ And you put the food in their car, and they’re just like ‘thank you, thank you, thank you.’ It’s been bittersweet. It breaks my heart that they even have to ask because they’ve lost their job.”

Casey estimates she’s seen about a 30% increase in demand at her pantry, a demand she’s struggling to keep up with as she’s organizing hundreds of food packages to be distributed on a given day.

While she said her pantry’s supply has been replenished with community support and a shipment from the federal government, some food banks in the Ohio Valley are beginning to face delays in getting food amid the high demand.

“Product that I used to be able to order and get within a week or two weeks at max, is now four to six weeks. And then worst case scenario, six to eight weeks,” said Cynthia Kirkhart, Director of the Facing Hunger Food Bank in Huntington, West Virginia. “We have a network across the country of 200 food banks that are competing with everyone else to access especially what we refer to as dry product, the canned goods and shelf stable items.”

Kirkhart said as the nationwide competition has increased, the price of goods who food bank purchases has also spiked. For example, she said the price of a dozen eggs have spiked from 65 cents to two dollars.

Yet, while the food pantries she distributes to are facing up to a 50% jump in demand, some Ohio Valley farmers are confronting a different problem:  too much food. Market disruptions due to the pandemic are forcing some dairy farmers to dump milk and some livestock growers to consider killing off hogs or chickens because they will not make it to market.

Daniel Hayden manages his family farm in Ohio County, Kentucky, where they produce about 1.2 million chickens a year in eight chicken houses, under contract with Perdue Farms. That contract has allowed Hayden to a degree of financial freedom, yet the future stability of that has come into question with the coronavirus.

“Agriculture, it’s like turning a barge … sometimes, it can’t turn in quite the speed and demand that consumer habits change,” Hayden said. “And we try to foresee some of that, but obviously no one could have seen this coming.”

Hayden said major meat producing corporations are facing a “logistical beast” adapting to the change in demand of where food is going — away from closed down restaurants, and instead almost exclusively to grocery stores.

“It’s hard for them to swing it over to another industry because those warehouses that distribute to grocery stores can only handle so much as well,” Hayden said.

On top of that, the virus is increasingly causing meatpacking plant workers to fall sick across the country and in the Ohio Valley, slowing down production and even temporarily shuttering plants.

This potentially leaves poultry, pork, and livestock farmers with more chickens, hogs and cattle on their farms than processing plants and distribution warehouses can handle, creating a supply bottleneck.

Hayden said his farm hasn’t been affected yet, but it could leave some farmers on the brink of financial ruin if processing delays extend for weeks.

“The big concern is that we’re going to have to depopulate those chicken houses that are full to 50%, and that is euthanizing 50% of those chickens because they literally can not be processed. We can’t keep them longer because they continue to grow,” Hayden said. “For a situation that dramatic could have an existential threat towards some farmers that have brand-new farms that depend on that 100 percent processing to make their loan payments.”

Kentucky Pork Producers Executive Director Bonnie Jolly said a record number of hogs are on farms across the country, potentially creating a glut that could put pork producers out of business.

The National Chicken Council has asked U.S. Secretary of Agriculture Sonny Perdue to distribute billions in dollars of designated relief funding for agriculture to farmers quickly, as the effects of the coronavirus mount. National trade associations for cattle and pork farmers are also calling for relief, as the price of hogs and cattle have sunk as much as 50% and 30%, respectively.

“We have a local guy … he has three farms. He’s dumping three tankard loads of milk a day from each farm because he was an independent producer,” said Chuck Moellendick, a central Ohio dairy farmer. “A friend of ours went up to him to talk about buying some baby calves from him, and he said he was in tears.”

The dairy industry was in distress even before the pandemic. Moellendick said for dairy farmers who don’t have financial protection through banding together in a cooperative, the effects of the coronavirus supply chain crunch could put even more dairy farmers out of business.

“He can’t even get his cows sold to a packing plant because packing plants are shutting down. The place he was shipping his milk to, they don’t have enough workers to run,” Moellendick said.

Meanwhile, the federal government and states are trying to find ways to solve two issues at once — give financial relief to farmers, while also providing food banks with the supply to meet a rising demand.

Ohio Gov. Mike Dewine  signed an executive order, allowing millions in state emergency funds to be used to buy farm products to be directed toward food banks. The lobbying organization American Farm Bureau and food bank operator Feeding America also sent a letter to Congress, pleading with lawmakers to create a voucher program that would allow farmers with excess product to directly work with food banks in need.

On Friday, the USDA answered: with funding in part coming from the Coronavirus Aid, Relief, and Economic Security Act, USDA said it plans to purchase $3 billion in dairy, meat, and produce to send to food banks and other charitable organizations. USDA also said it has another $873.3 million available for extra food purchases, if necessary.

Gibson said the cooperative he works with through the Dairy Farmers of America – Mideast Area has been fortunate to not have to dump milk, but he’s still selling his milk at a “distressed” price.

“I think the dairy industry is really trying to pull out all the stops they can to get milk processed and in the food banks,” Gibson said. “There’s tremendous need right now.”

Foodbank spokesperson Claire Gysegem said their facility has seen a high number of calls from people asking how and where to get food, many who recently filed for unemployment.

“There’s a really strong cultural value here in Appalachia where it makes it very difficult for people to ask for help,” Gysegem said. “So, I know the need is probably five times greater than what we’re seeing.”

She said while her food bank has seen a surge of donations from communities, some of the pantries they serve have had to shut down because of coronavirus impacts. As the Ohio Valley’s economic crisis continues in the months ahead, her food bank may need the help of farmers to keep up with surging demand.

“It’s anxiety I think that we’re all feeling in seeing how far we can stretch things,” Gysegem said. “We want to take whatever is available.” 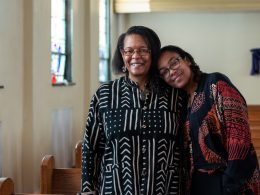 Dr. Norma Thomas carries a microphone as she walks the streets of Uniontown, Pennsylvania’s East End. This is…
byKristen Uppercue
88 shares
88
0
0 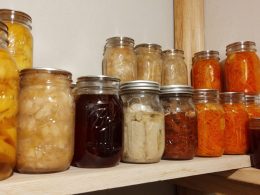