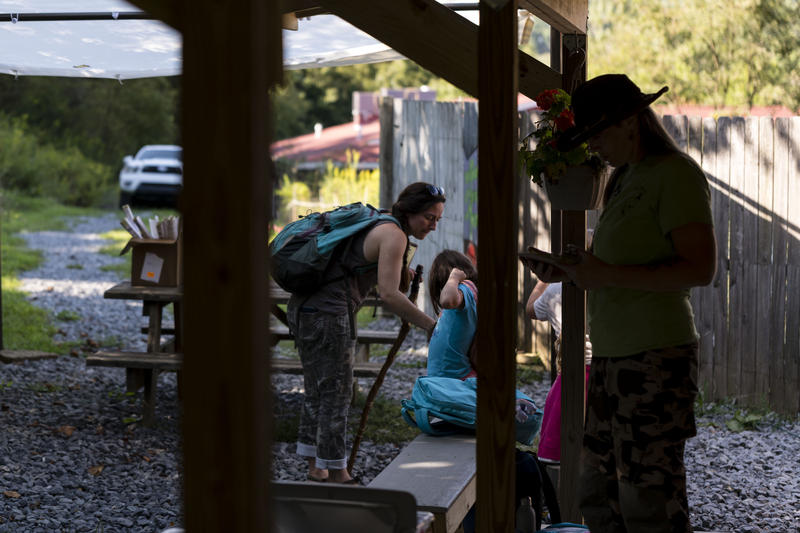 Resourceful. Self-reliant. These are some of the values many people who live in the mountains pride themselves on. But could we sustain ourselves? As part of our occasional series “Wild, Wondering, West Virginia,” Lana Lester of Wyoming County submitted her question to the Inside Appalachia team: “Could West Virginia Be Self-Sustaining?” She said she, “always had the feeling that God Blessed West Virginia with all of our natural resources and we have everything there in the state to survive.”

So, could we survive, on our own? And what would that really look like? We set out to try to find some answers.

Survivalist Store And Some Goats

Our search began outside a survival shop in Cross Lanes, a suburb of Charleston.

In a small pen outside, there was a herd of Nigerian Dwarf goats. “They are small, but they have the highest butter, fat content of any of the dairy goats,” said Bob Keller, the owner of Keller’s Survival Shop. These goats are mostly pets. But if needed, they could provide his family with goat milk.

Goats can also provide meat. Raising goats is just one way people with a small plot of land could be more self-sufficient, Keller said.

“People really don’t realize if you took a 10 by 20 spot in the yard, at home how much food that spot would create.”

Inside his survivalist shop, Keller sells dried food that has a long shelf life, and water purification materials.

“There are people that I know locally that are in the 97 percent self-reliant.”

Some of these people Keller knows might be called “doomsday preppers,” a subgenre of folks who prepare their home to be able to survive on their own, in case of a catastrophic event. But Keller said he sees all ranges of people in his store who are interested in learning to survive without having to go to the store.

“My business in general is going up rapidly.”

Beyond his own business, Keller sees other signs that more people seem to have an interest in self-reliance.

This lack of knowledge and skills makes people pretty vulnerable, compared to our grandparents or great-grandparents, Keller said. Things like canning, growing food, carpentry and basic mechanics — there is a lot that our West Virginian ancestors understood that we lost.

“I think it’s a product of 21st century America,” Keller said. “We were sold this approach growing up that well, you if there’s a problem go buy the solution.”

But Keller said he thinks people in West Virginia have retained a lot of these skills and knowledge.

“You go to rural areas and those self-sustaining skills and activities are still alive and well. When you look at less densely populated states, you have a lot of this activity going on.”

But it is not only West Virginians who are interested in learning to be more self-reliant. A survey commissioned by the economic analyst website, www.finder.com, found that in 2018 1 in 4 American adults spent up to $2,000 on home renovations to prepare for emergencies. Millennials actually spent the most on survivalist gear. But does that mean that younger people are more prepared? Or are they just shopping as a way to compensate for a lack of hands on know-how?

We sent our question over to economist John Deskins, at West Virginia University, to get his take.

“What was going through my mind? To be honest, I was thinking, ooh, this is a bad idea. If you want my honest opinion?”

On a personal level, Deskins said he gets why this would be appealing.

“If you want to harvest the deer from your backyard, or if you want to grow your own tomatoes and cucumbers in your backyard, you may be able to do that better than the ones we import from California,” Deskins said. “I’d much rather get a backyard tomato, other than one from the grocery, but people are free to do that.”

As an economist, Deskins thought it would be disastrous if we forced people to buy things that are made locally. Trade is just more efficient, he said, than producing everything ourselves.

“You know, if everyone’s just going it alone, then you don’t really have the opportunity to be really good at something and to capitalize upon your kind of special talent.”

Currently, West Virginia is pretty self-sufficient when it comes to electricity. About 92 percent comes from coal that is mined in the state. Of course, the grid we pull from is a regional grid, so it is possible the electrons you are using right now were not produced by coal. And setting up a new grid that is independent of the rest of the country would take a lot of work, and time. But it is possible as a long-term goal, if the state continues to mine coal.

Apart from electricity, though, West Virginia is not so poised to be self-sufficient. We import roughly $3.4 million worth of goods from out of the country, with mechanical products at the top of the list. Incidentally, a lot of the state’s imports include airplane parts, so we could likely do without those if we were just trying to survive on our own.

But when it comes to what we would eat, the picture is a lot more bleak. Despite Bob Keller’s optimism that we could grow a lot of our own food in a 10 by 20 plot in our yard, West Virginians currently produce just one-seventh what we consume when it comes to food. So we would need to support and incentivize farming.

No More Coffee, No More Chocolate

And we would have to do without a lot of foods that just do not grow well here — like lemons, chocolate and coffee. Not to mention a lot of other things that use raw materials that we just do not have in West Virginia, like cell phones, or EKG machines.

And doing without these things, economist John Deskins argued, means we would have a lower quality of life.

“I’m saying you have two extremes. One extreme is where individual households are self-sufficient. That is an extreme system that’s like a caveman type system. And then the other end of the extreme is a purely global economy where we have specialization across the entire world, and trade on a grand scheme.”

In the middle of these two extremes, though, Deskins said he could imagine a world where we are still importing and exporting some things, but still producing more stuff and growing more food, in state.

“It’s better than no specialization at all. But it’s not fully capitalizing upon the high level of specialization that we have in a global economy,” Deskins said.

Even as a champion of an economic free-market, Deskins admitted there would be some benefits to being more self-sustaining.

“It would greatly reduce the transportation cost. It would reduce the fuel, and other expenses associated with moving goods. And there might be some environmental benefit associated with that,” Deskins said. It would also be easier to keep a closer eye on health and safety standards.

Still, bottom line, if we want our economy to be strong, global trade is essential.

But, something economists like Deskins do not measure when they talk about quality of life, is the desire to buy local, even if it means at a higher cost. Some people would rather pay more money for a chair made by their neighbor, than buy one online that comes from China. And it is the same with food. Some people like the idea of learning to grow their own corn and perhaps taking it to their neighbor to grind it into cornmeal. And inevitably, this might mean learning to survive with less.

For another perspective on what it could look like to be more self-sustaining, we spoke with Beth Wheatley, director of the West Virginia Nature Conservancy.

“I see a West Virginia that really uses nature as a driver of economic growth,” Wheatley said. “We’re standing atop a ridgeline in Mingo County; in every direction are mountains— some are thick with forests; others are stripped to rubble and rock. Over here we’re looking at a flat landscape, but still completely surrounded by forest on both sides. And this is very typical of many sites in West Virginia where you have former coal mine lands surrounded by intact forest.”

She brought us here, because she said it shows two radically different types of landscapes, both of which are abundant in central Appalachia. And both have potential to help people in West Virginia be more self-sufficient, said Wheatley. “There is so much that we can produce ourselves.”

And this self-reliance does not necessarily have to come from manufacturing, or coal. She and others at the Nature Conservancy are working to find more ways that forested land can earn West Virginians money.

Wheatley said she envisions a future where solar farms on top of former strip mines are producing energy.

“It’s virtually the perfect site for solar development because it’s relatively flat, because of transmission lines and access,” Wheatley said.

“We have the sun at our disposal, we have hundreds of thousands of former mine lands at our disposal and many owners of those lands very interested in solar development.”

Several years ago, The Nature Conservancy conducted a listening project across West Virginia. In addition to wanting economic opportunities, many people told Wheatley they value living amidst so much nature.

“And I remember one person saying that she doesn’t see it as something separate from us, but it’s part of who West Virginians are. It’s in our blood,” Wheatley said.

“And that really gives us the grit and determination and connection to the land to really work together to grow nature- friendly economic development activities in the state going into the future. I think we can have it all.”

Living Off The Land

Ed Klein moved his family to rural Wetzel County, West Virginia in the 1970s to live off the land. They were in Brooklyn at the time, and he saw a film called “The Wilderness Family”. It is the story of a family who escaped the traffic and city life of Los Angeles to build a cabin and settle in the wilderness.

Initially, Klein’s family lived in a tent when they moved to West Virginia in 1978. Eventually, his wife left, as did his kids, but Klein stayed.

oday, he has an enormous, three story cabin that he designed and built himself. He has his own woodshop, and a greenhouse, though neither are being used much these days.

Klein said he has no regrets. “How could you regret this?”

We asked him if he thinks this type of life is realistic for most people, or if he feels he is unique.

With a small plot of land, Kleine said, anyone could do this. But you will need help — people who can teach you the skills you will need to survive.

But before he would help us, Klein said he would need a letter from my psychiatrist. Though I am not sure if he means only someone with some level of mental illness would try to live off the land, as he has done, or if it takes someone who is taking care of their mental health. But perhaps, maybe he means both.

This story was originally published by West Virginia Public Broadcasting and is part of an episode of Inside Appalachia about resilience and survival.