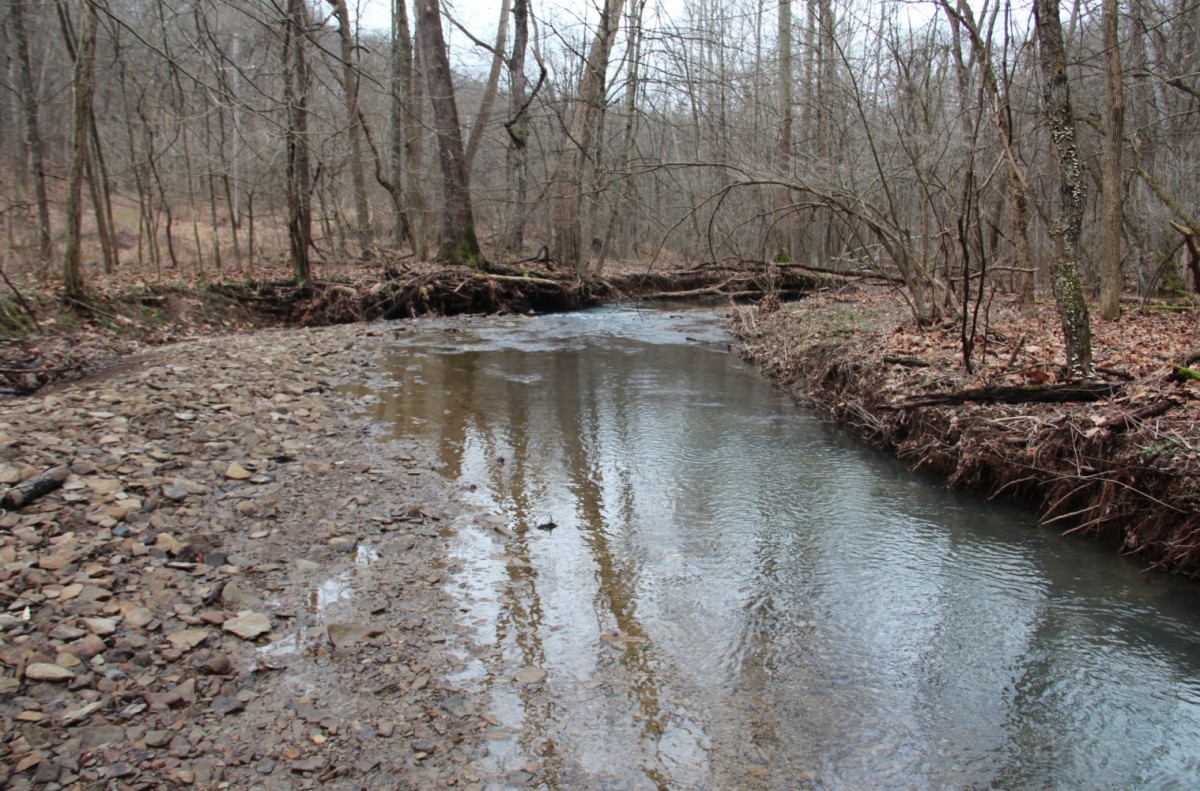 Polen Run in Greene County, where longwall mining was allowed to go forward. A panel of judges acknowledged that “there is at least some likelihood that Polen Run will experience some degree of temporary flow loss.” Photo: Reid R. Frazier/The Allegheny Front

Pennsylvania’s Act 54 is the 1994 amendment to the state’s mining law, providing for the protection and restoration of water supplies affected by mining and of structural damage to buildings and homes above mined land. It also requires an assessment every five years of how the law is being implemented by the Department of Environmental Protection (DEP).

The fifth report was recently released, and looks at the 5-year time period from 2013 to 2018. The Allegheny Front’s Kara Holsopple spoke to the report’s lead author, Daniel Bain, at his office at the University of Pittsburgh. Bain is an assistant professor of geology and environmental science.

KH: There are 49 active underground bituminous coal mines, which represent an undermined 28,000 acres of Pennsylvania. Sixty-two percent of the acres are classified as longwall mining, but just seven of the mines are longwall mines. So before we get into the report findings, can you explain the difference between longwall mines and the other two types of mines that are mentioned in the report?

DB: In this assessment period, there are basically three types of mining that we’re looking at: longwall mining, room and pillar mining, and pillar removal. So we’ll start with room and pillar mining. You have rooms, but you’re leaving a large amount of coal there to hold the ceiling in place. Pillar removal is a mining technique where, in some cases, you’re able to go back in and remove some of those pillars so that you can take additional coal resource out of the ground.

In longwall mining, you remove the entire seam. You remove an area that’s up to half a mile wide, a mile or two long, and you take all of the coal out. So in longwall mining, it’s a given that you’re going to have subsidence. You take that much material out, then that rock behind what they call the face, where you’re cutting the coal out, is going to collapse. That collapse is going to propagate up through the rocks until you hit the surface. So you can have significant amounts of subsidence.

DB: Correct. You have a really gentle curve line. If you know where to look for it, you can sometimes see it on the landscape, particularly where the roads are. Basically, the land surface sinks, and the areas around the longwall panel stay in place. So you basically have a dip in the middle.

KH: Were there significant changes in this five year period from the last report, and the impacts of mining on structures, water supply or the land itself?

DB: This is the second assessment report I’ve been involved in. The first one was the five years previous to that, and there were some differences this time in terms of the amount of coal mining with the changes in the economics of coal right at the beginning of this assessment period.

There are some dramatic shifts. A lot of room and pillar mines, mining what’s called thermal coal, or coal that you would use to fire turbines in an electrical generating or a power plant, closed. At the same time, there were some disruptions in the production of what’s called metallurgical coal, or the coal used to create coke [to make steel]. There is a peak in demand for that coal, so there are actually quite a few metallurgical coal mines that opened in this period.

I would say that in terms of some things, we know how to fix things. For structures, we know how to address some of the complications when subsidence occurs. We’ve learned from decades of mining what’s going to happen. So we can do things like excavate the dirt around the foundation and re-level on the longwall faces moving underneath your property.

The thing that happened during this period was back in about 2005, there was new technical guidance on the protection of surface water features. This was the first assessment where we really started to see some of that data coming in. The things that impact streams are easy to see.

There are two big stream impacts. There’s the backing up, where you get ponding. In that area where we talked about before, the subsidence — where you have sinkage — that depression can create, in essence, a low-head dam or a small dam. There’s a technique where they basically cut the rock out. It’s called a gate cut. That technique works really well. There’s a strong body of knowledge about how that works, and so we know how to fix ponding.

The other thing that happens a lot is the loss of flow in smaller streams further away from the main valleys. What we’ve started to see in the last assessment, and it’s continued in this assessment, is a lot of grouting. So basically in areas where you lose flow, it’s because you’ve created cracks that allow the water to flow underground. This technique [of grouting] uses cement that expands. You pump it into the ground, and that’s meant to expand and close those cracks that have been created by the subsidence. In this period, we really started to be able to look at that in a way that hasn’t been looked at before in the report.

KH: You mentioned issues with data collection for streams or groundwater, wetlands and also issues with software technology that have made it more difficult to analyze these things.

KH: Stamped on a piece of paper?

DB: Yes, so if you could if you stamp a piece of paper, you know, that’s real. But if in a PDF, what if someone goes in and changes your portable document later? So that’s a problem, and that needs a workaround.

But in terms of how much work is done at the Department of Environmental Protection, there are fewer employees now than there were. So a lot of people look to industry, and you see that if you modernize your information systems, you give people more tools to do the job. So fewer people are needed to do the job.

The problem that seems to have gone on is that we’ve allowed things to sort of shrink in terms of the number of employees, but there’s not been a concurrent modernization of the information management system. It’s no fault of the people that are doing the work.

It’s really a Commonwealth-level decision on how we’re going to handle these data, and how we’re going to build management systems for data. The original data system to track these impacts is 25 years old. It’s in a software that isn’t made anymore. So if you want to make a change, it’s exceedingly difficult. Most of the Windows products that everybody runs more or less, are no longer are backwards compatible with these older systems. You have a lot of impediments to making changes that would make it easier.

KH: Is there anything that stood out to you from this five year report that we’re talking about that is notable either in a good way or that is worrying to you?

DB: One thing we did in this reporting period was started talking about some emergent trends. In some cases, for whatever reason, it seems to be economically viable for the mine operators to purchase outright a lot of land above these longwall operations.

It’s not a problem in and of itself, but if those lands become state game lands, or they’re taken out of production for agriculture, I’m not sure that we quite understand how that’s going to impact the community.

A spokesperson for DEP says that when it comes to paper records used to report hydrologic monitoring, the department is looking at all best available technology available to accept data electronically for the next report. The department is also working towards modernizing “recordkeeping, permitting, and other functions across the agency, including in the mining program.”

There’s a move in the state legislature to make future Act 54 reports discretionary, and to remove the requirement that it’s generated by a third party, like a university. According to a DEP spokesperson, the administration is “opposed to any legislation that would make this report optional, because the public has a right to a full accounting of the impacts of longwall mining on water supplies and structures.” But she says they’re committed to working with the General Assembly on this legislation.

This article was originally published by the Allegheny Front.