byJohn W. Miller
7 minute read
Joe Troop was born and raised in Winston-Salem, North Carolina, but after feeling unwelcome by America’s bluegrass community for being gay, he moved to Argentina. Since, he’s created an entirely new genre of music and brought a love for Appalachian bluegrass to an international audience. Photo: Racheal Baker
Total
13
Shares
13
0
0

In 2017, hours after an activist was killed at a neo-Nazi rally in Charlottesville, Virginia, a new bluegrass band from Argentina called Che Apalache performed in a contest at the Old Fiddler’s Convention in Galax, on the other side of the state.

Joe Troop, the band’s founder and lead singer, nervously stepped onto the stage. He had chosen to sing as the band’s entry in the bluegrass band competition, “The Wall,” an original, provocative protest hymn. “We were terrified,” says Troop. “It was heightened by the context of the moment.”

For to sing, oh sing we joyfully!

Let us sing about a better world

Where different paths have been unfurled

Of a land where freedom rings.

Classic Americana. In a recording of the set that night, you can hear the crowd of more than 7,000 roar. A couple stanzas later came this:

There’s all kinds of talk ‘bout building a wall

down along the Southern border.

‘bout building a wall between me and you

Lord, and if such nonsense should come true

then we’ll have to knock it down.

Singing a pretty song with progressive politics in the heart of Appalachia is the result of Troop’s strange odyssey that underscores the power, persistence and adaptability of music, the changing form of American masculinity, and, just maybe, the promise of sweeter dialogue in our politics.

Troop is a gay bluegrass fiddler and banjo picker from North Carolina who has lived in Buenos Aires since 2010. There, he formed a generation of pickers and remade American roots music to suit his vision.

The story fits the form: Bluegrass is an immigrant art, the 19th Century American blending of banjo from Africa, guitar originally from Spain, and mandolin and fiddle with roots in Italy, spiced with Christian hymns and Black gospel and blues. New music for a new world.

Che Apalache’s blend of bluegrass, gospel, tango and other Latin American forms, is a hit. The band is in the middle of its sixth U.S. tour, which have included stops in over 30 states. Banjo legend Béla Fleck produced the group’s new album, “Rearrange My Heart,” which got a rave review from Rolling Stone. Che Apalache has played the Kennedy Center and opened for the Avett Brothers.

There is a long history of politics and protest in American roots music. Since its birth in Appalachia and the South, bluegrass and its cousin, old-time, have been divided between virtuosos like Earl Scruggs, Alison Krauss and Fleck, and a smaller number, like Hazel Dickens, Pete Seeger, and, more recently, Rhiannon Giddens, who use the art to make a point. In this decade, there’s been a resurgence in the latter, led by Giddens’ Carolina Chocolate Drops, the Punch Brothers, who won a Grammy this year for an album that included a song about Donald Trump, Jr., and, now, Troop.

In 2010, he was playing fiddle and banjo in traditional bluegrass bands in North Carolina, and getting restless. “I needed some perspective outside of the U.S.,” he says. The “heteronormativity” of the bluegrass scene was jarring, he says. He overheard people mocking his manliness. The bluegrass scene was “not a very good scene for a homosexual,” says Troop. So, he left.

A friend suggested Buenos Aires. He thought he would stay a couple years, but he found a home, and love. In 2015, he married his Argentenian boyfriend. To make money, he taught banjo and collected music nerds interested in this strange American art form. Despite falling out with the culture around it, bluegrass “never left me,” he says.

Some of his students were good. So good that Troop stopped charging them and invited Pau Barjau (banjo), Franco Martino (guitar) and Martin Bobrik (mandolin) to form a band. Che Apalache, which, loosely translated from Spanish, means “Appalachian buddy,” started as classic bluegrass and has grown to include Latin rhythms like tango and candombe. “That’s when we figured out this could be something authentic,” Troop says.

In 2017, the newly-minted ensemble made its U.S. debut and won the neo-traditional band contest in the Appalachian String Band festival at Clifftop, West Virginia. A week later, the quartet was at the Galax convention.

In “The Wall,” Troop crosses from old-school Christian lyrics– To love your neighbor as yourself/Is a righteous law to live by– to progressive politics and back again.

“You have to speak people’s language,” he says. “I love this music so much, and sticking with it and coming back to the U.S. is how I chose to reach out to people when everybody is so divided.”

For to sing, oh sing we joyfully!

Let us sing about a better world

Where different paths will soon unfurl

where no man’s blood shall stain the soil

Of a land where freedom rings

After the 2017 Galax performance, which generated whistling, shouting and middle fingers, “a friend who’s a former marine escorted us through the crowd,” Troop remembers. “It was pouring rain and we ran through the crowd. A Southern Gothic moment. One of the most beautiful, mystical adrenalines I’ve ever felt.”

“Since I left the U.S., immigrants are now more stigmatized than gays, and now I’m an immigrant, too,” Troop says, noting the irony. In a tune called “The Dreamer,” Troop sings about his friend Moises Serrano, brought to North Carolina as a child, “poor baby Moses” less than a year old “when his momma crossed the border.”

in the hills of Appalachia

proved the world was unforgiving

An immigrant child must face a life

where dreaming is forbidden

This spring, I drove from my home in Pittsburgh to Washington, D.C., where Che Apalache was playing a show at the Hamlin St. Diner, a divey restaurant in an unpretentious neighborhood northeast of Capitol Hill. I had discovered the band at the Clifftop festival, where their performances that last couple years had been the talk of the camp. “Do you know these guys played ‘The Wall’ at Galax?” people said.

In the green room before the show, I met up with the band. What surprised them most about America? “Everybody sings,” says Pau Barjau, the banjo picker. “And people don’t just sing along. They sing harmony.”

Troop is 36 years old, with the lean lanky build of a high jumper and speaks with a manic energy that betrays intelligence and ambition. He is the group’s unquestioned visionary and leader, guiding his talented, charming quartet around Trump’s America. He coaches his bandmates on American culture and language, seamlessly switching between Spanish and English.

“People sing because of church,” he explains. Troop is not a believer, but he is a seeker, and he’s assimilated Christianity as a language.

Troop has known he was gay since he was a teenager. It made him empathetic and inquisitive about the world, he says, prompting stints in Japan and Spain, where he learned the languages. “If I wasn’t gay, Latingrass would never exist,” he says. “If I wasn’t queer, I probably never would have left North Carolina. That’s the dominant thing in my life.”

On stage, Troop plays a versatile and funny frontman, incarnating characters who reflect his swirling identities and phenomenal ear. He jokes about his homosexuality – “I’m from Winston-Gaylem, North Carolina” – playing off the macho vibe of the repertoire, and his three (straight, broey) Latin bandmates.

Last year, Troop cold-emailed Fleck. That turned into an invite to Fleck’s banjo camp and an offer to record and produce their new album at Fleck’s home in Nashville.

“I believe in their music,” Fleck tells me. “They hit all these different notes that appeal to all kinds of concert and festival bookers. And they’re really good for TV. I can easily see them on SNL or Fallon.”

Fleck says Troop’s ear is special. “Joe’s a guy who travels to Japan and comes back speaking Japanese.” That’s a challenge, Fleck says. “He can do all these characters: Latin, banjo guy, redneck moustache guy. In making the record, I was concerned he wasn’t learning how to be himself.”

In the end, that self is still a bluegrass picker from Winston-Salem. On the new record, the band mixes fresh takes on Bill Monroe, the Carter family and gospel standards with original 60s-style protest songs, and showstopping innovations, like a Japanese-style tune the musicians play on the wrong side of their string instrument’s bridges.

“There are a lot of bands that do innovative stuff like that,” Fleck says. “The difference is [Che Apalache] does it well.”

In a Spanish and English song called “Once Took Me In,” Troop sings about finding home in a Buenos Aires neighborhood called Once.

Once took me in

This very land of sin

Latingrass, “is my way of reinserting myself into a world I loved but had problems with,” Troop says the day after the D.C. show. Playing in front of a younger, more liberal crowd, the band had been well received, and “The Wall” got a thunderous ovation.

“I get to bring my real identity into a world I was incongruent with.”

It’s a tension you hear in almost every song Troop sings, and, for our world, it feels familiar. 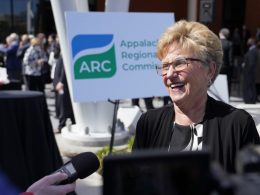 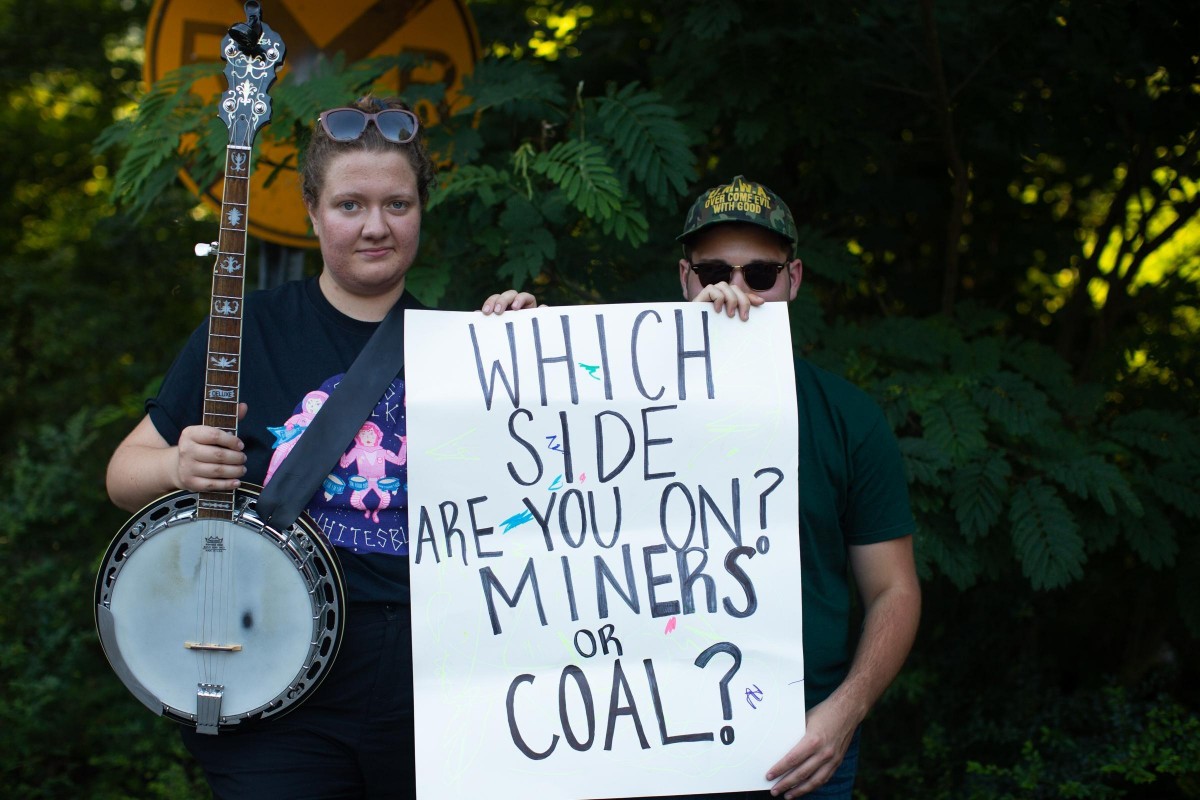 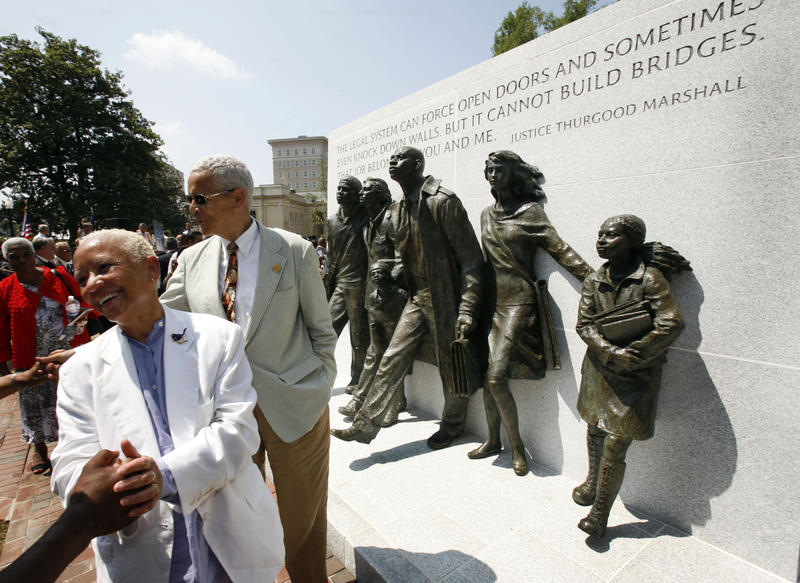 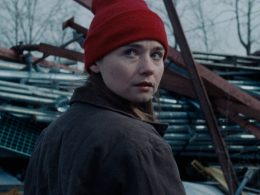