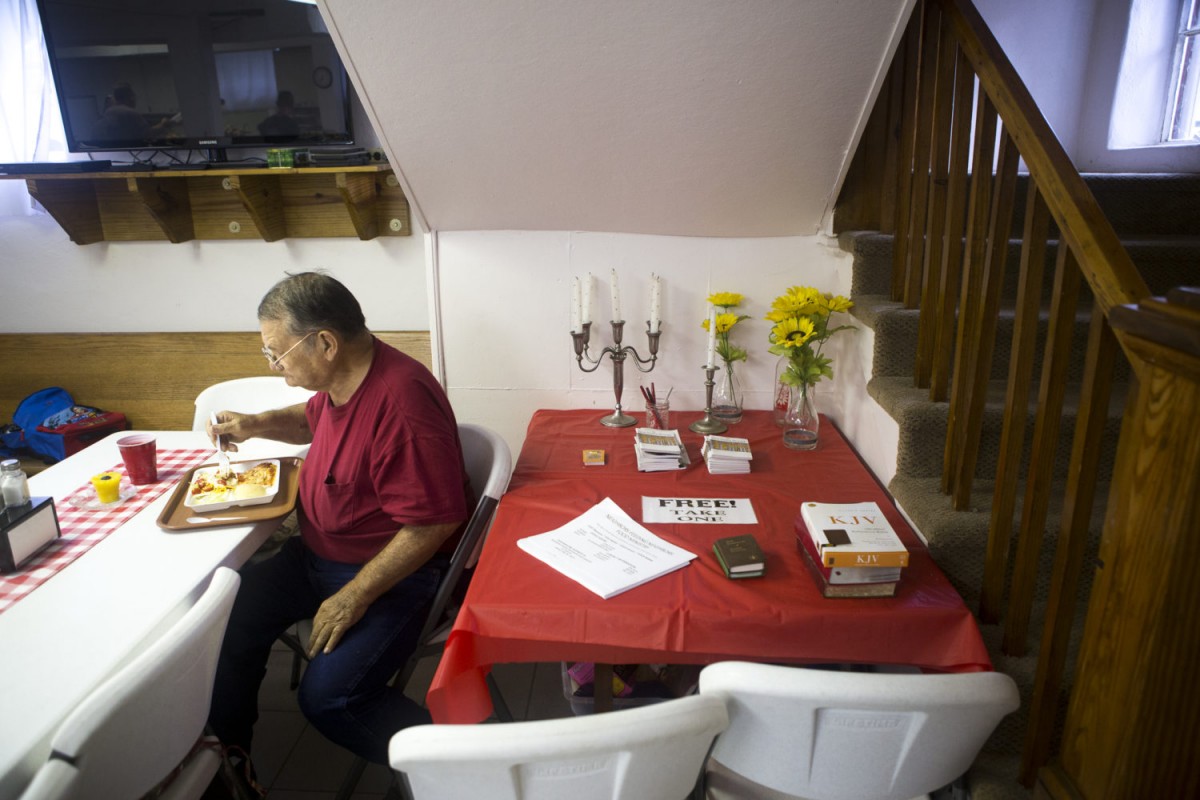 An elderly Mitchell County woman survived only because maggots in her leg were eating the dead flesh and preventing infection.

At the time, she was living in a run-down home with no electricity or running water and little to no food. She could not afford these things or medical care.

This is one of the stories that stands out to Allen Hoilman, co-director of Spruce Pine’s Neighbors Feeding Neighbors food bank.

He and his wife, Amy Hoilman, have been running the food bank only for a few years, but community members said they have already made an impact.

Jerry Sullens, who both receives help from Neighbors Feeding Neighbors and works at the food bank, said the Hoilmans have done a lot in helping resolve the hunger crisis in Mitchell County.

Driving through downtown Spruce Pine, Allen can point out every dumpster people go through looking for food and every abandoned building or camp people have made their homes.

One of these buildings once housed the woman who survived by having maggots eat her flesh.

While many food banks operate by having those facing food insecurity come in for food, Neighbors Feeding Neighbors operates primarily on a delivery system. This is because many of those who receive their donations are elderly, disabled or both.

The organization also offers a weekly community dinner at Newdale Presbyterian Church in eastern Yancey County that draws people from across the region.

According to Feeding America’s Senior Food Insecurity study, North Carolina is the fifth-worst in the nation when it comes to the elderly facing food insecurity.

Sullens said he falls into this category. A former trucker, Sullens retired to his hometown of Spruce Pine after having several heart attacks.

Sullens described his job as delivering food, burying bodies and taking out the trash, but Allen said Sullens’ help is his way of trying to pay back his community.

Though Sullens does not receive any federal benefits, if he did, they might not cover his expenses anyway.

Feeding America reports the average Social Security check is $1,467 a month for retired workers, resulting in an annual income of $17,606. In 2019, the federal poverty line is $12,490 a year for a single person.

The average amount of food stamps for homes with elderly members is $125 a month, according to Feeding America.

In Avery County, Theresa Ollis receives a $741 Social Security check along with $15 in food stamps every month. After paying her $400 rent and $325 car payment, she has only a few dollars left a month for food and emergencies.

“Sometimes I don’t have hardly nothing left in the house to eat because it’s hard,” Ollis said.

To close this gap, Ollis visits local food banks like Reaching Avery Ministry, where she can receive a week’s worth of food once a month.

Reaching Avery Ministry director Janet Millsaps said there are many women like Ollis in the county who are struggling to make ends meet.

Millsaps said for the most part, these women are widowed and never had a job with a recorded income, which affects the amount they receive with their Social Security checks. Because of these circumstances, these women are often living on their own, paying rent and buying food and any medication out of pocket.

These circumstances are not unique to Avery County. Of food-insecure elderly individuals, 20 percent rent homes, and 25 percent are disabled, according to Feeding America.

To help relieve some of this stress, Reaching Avery Ministry allots a small portion of its budget to medical prescriptions.

“We don’t do anything that is controlled,” Millsaps said.

“We do mostly heart, blood pressure, diabetes things. Those same individuals that are struggling to pay rent, buy food, sometimes have trouble buying medicine. We refer them to agencies so they can get a little help with their rent and some help with medicines and we help them with some food, then with their income they’re able to survive.”

NC seniors are worse off than most of nation

According to this same study, the rate of food insecurity in the elderly jumps to 10.5 percent in North Carolina.

Only six states – New Mexico, Texas, Louisiana, Mississippi, Alabama and North Carolina –  plus the District of Columbia, go above the 10 percent mark.

Illness in the elderly makes the problem worse

A mother of three and grandmother of 10, Ollis lived in Gastonia most of her life, only recently moving to Avery County. While in Gastonia, she only occasionally went to similar organizations to make ends meet, relying mostly on family support.

In 2002, Ollis suffered an aneurysm that left her unable to care for herself.

“When I had my aneurysm, I couldn’t even drive a car,” Ollis said.

“My kids had to teach me how to do everything all over again. They did, so I guess I did them right because they raised me all over.”

Ollis can now drive and take care of herself for the most part, but she still suffers seizures and has memory problems.

Before moving to Avery County a few months ago, Ollis was in an abusive relationship, she said. She met up with a lifelong friend, Richy Keller, and they decided to move to the mountains and take care of each other. Ollis said since moving to the mountains, her COPD has been bothering her less and she is able to breathe more easily.

Last September, Keller was diagnosed with liver cancer. He said his Medicaid covers most of his medical expenses, but he still has trouble making ends meet. Each month Ollis drives him to Reaching Avery Ministry to pick up their food boxes. He said traveling to and from hospitals and procedures takes all the energy he has.

“I just had a chemoembolization procedure done on Aug. 14 and I had to go back to the hospital four days later because I was hurting so damn bad and stayed in the hospital for about three days,” Keller said. “I’ve been feeling better, but I’m still in pain.”

The procedure involves injecting chemo into his liver from a small tube in his wrist and using poppy seed oil to close off the artery to the liver, blocking the flow of blood to the organ and allowing the cancerous cells to die.

Ralph “Butch” Grindstaff is a near-constant fixture on the Neighbors Feeding Neighbors front porch in Mitchell County. According to Allen Hoilman, Grindstaff has a brain tumor. They do not know how much time he has left.

Unlike Reaching Avery Ministry, Neighbors Feeding Neighbors does not offer financial or medical aid, but it does offer support in any other way it can.

Sullens said he did not know the Hoilmans before his most recent heart attack, but they were the first people to check on him in the hospital. Grindstaff did not have a cellphone to call anyone if he needed help, so Allen Hoilman gave his phone to Grindstaff.

He said it shocks him that so many sick and elderly people are left to fend for themselves because they do not have families and those who do are often left behind when things get hard.

Sullens said he has hard times in his life, but it’s gotten easier with help. He said he is happy to pay it forward to those who need it now more than he does.

“You wouldn’t believe some of the things we’ve seen until you’d see them with your own eyes,” Sullens said. “You’d think I was lying. But the smiles on these people’s faces, they make it work it.”

The Faces of Hunger project is a year-long reporting initiative from Carolina Public Press focusing on issues of food insecurity in rural North Carolina, including its impact, root causes and potential solutions. In addition to sharing the stories and experiences of people most impacted by hunger in the region, this in-depth project will include reporting on the issues and systems impacting hunger. Carolina Public Press will also offer opportunities for community dialogue and resource sharing.