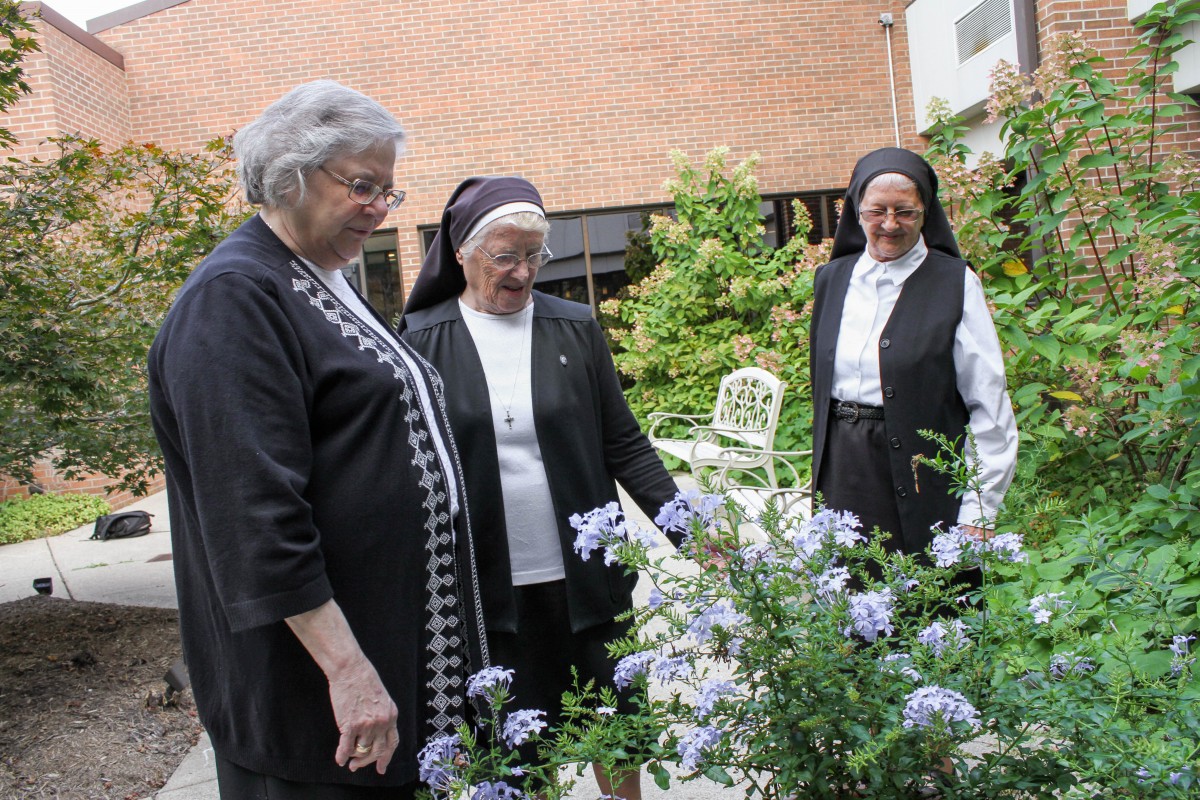 When Vincent Pallotti was ordained a priest in 1818, he wrote, “I ask God to make me an untiring worker.” He set about to offer “food for the hungry…medicine and health for the sick.”

Pallotti, who lived simply, in Rome, his entire life, worked in fellowship. He established schools and shelters for women, orphanages, night schools for laborers. “Remember that the Christian life is one of action; not of speech and daydreams,” he wrote. “Let there be few words and many deeds, and let them be done well.”

In that spirit, the Pallottine Missionary Sisters were founded, in Germany, in 1888. The order flourished, its members venturing into the world to serve. The Pallottine sisters arrived in West Virginia in 1912. In 1924, they opened a 35-bed hospital in Huntington. That hospital is now St. Mary’s Medical Center, the largest medical facility in Huntington and Cabell County’s largest private employer. It was announced in May that St. Mary’s had been sold to Cabell Huntington Hospital, another of West Virginia’s largest hospitals.

The number of  Pallottine sisters in the U.S. today has dwindled to 20, 12 of whom are in West Virginia, 10 in Huntington. In announcing the sale of St. Mary’s, Sister Mary Grace Barile, the provincial of the Pallottine Missionary Sisters, said, “Due to the declining number of sisters in our community, we are no longer able to continue our health care ministry.”

But the Pallottine sisters aren’t relinquishing the commitment to their community. Their mission will now be advanced through the Pallottine Foundation of Huntington, a conversion foundation.

Conversion foundations are created when nonprofit health care organizations are sold to for-profit entities. They’re not a new phenomenon in Appalachia.

This conversion foundation, the Pallottine Foundation of Huntington, will provide yearly cycles of grant funding to nonprofit organizations in 20 counties in West Virginia, Kentucky and Ohio in support of health-related initiatives, not necessarily hospitals or health systems. The first recipients will be announced in the coming weeks, expected in the areas of food insecurity, mental health, substance-use disorder and tobacco-use prevention and cessation.

Fundamental to St. Vincent Pallotti’s ministry was his commitment to harnessing the gifts of those with whom he communed. He strove to empower the laity to fully realize the church’s mission – clergy and lay people of “every class, rank and condition” ministering in concert – an initiative that was about a century and a half ahead of its time.

In a sense, as the Pallottine Missionary Sisters pass ownership of St. Mary’s to Cabell Huntington and double down on their commitment to the broader community, they’ve come full circle.

“We’ve lost many, many members, but the mission is still there,” Sr. Joanne Obrochta avows. “We know why we’re here; we have a purpose, and it’s being fulfilled. Maybe differently, but even more meaningfully.”

Sr. Joanne is a woman of quiet, impactful words. Born in the once-bustling coalmining town of Gary, West Virginia, her first calling was to nursing.

“My mother had a stroke and died when I was a junior in high school,” Sr. Joanne says, “and I think that was the beginning of my vocation.”

She wanted to attend a Catholic school, and sought counsel from her parish priest. “He said, ‘I know just the place you would probably like very much. It’s in Huntington.’ He was referring to St. Mary’s School of Nursing, within what is now St. Mary’s Medical Center.

“He said he was going there that next weekend, he had some business there, and invited me to come down and have an interview with the sisters.

Though she loved nursing dearly, Sr. Joanne knew “there was something over and above that I needed to do in life, and that was to become a religious sister.” Entering the Pallottine order, “I found my home. This is my home.”

The history of the Pallottine Missionary Sisters is an epic tale.

In 1912, four women left Bremerhaven, Germany, bound for they knew not where. They simply knew they were called. They booked passage on the Titanic, but were delayed due to an issue with one of the sisters’ travel documents. They later sailed past the wreckage of the ship, carnage, reportedly, strewn for miles.

Arriving in the States, they were scheduled to travel by train to upstate New York, to study English with the Sisters of St. Francis. But, once again, they were delayed at the last moment. The train on which they’d been booked crashed, killing or injuring many of the passengers.

The sisters arrived in Richwood, West Virginia, in August of 1912, a mountain community of about 3,000 people at the time. They opened a school and a hospital. In 1920, they opened another hospital in Buckhannon, St. Joseph’s, now a 51-bed facility, which the Pallottine Missionary Sisters sold to United Hospital Center in 2015.

The Pallottine sisters arrived in Huntington in 1924. On Nov. 7, they admitted the first patient to their 35-bed hospital, a charity case. The sisters were nurses, cooks and cleaners. They grew fruits and vegetables, pounded nails and stoked the coal furnace.

St. Mary’s now has nearly 400 beds, a nursing school and a teaching facility for residents and fellows associated with the Joan C. Edwards Marshall University School of Medicine. It has centers of excellence in cancer treatment, cardiac care, emergency and trauma services, neuroscience and orthopedics.

The sale of the hospital was four years in the making. An agreement was signed with Cabell Huntington in 2014, but there were objections to the partnering of two of the state’s largest hospitals. The state legislature cleared the way for the transaction in 2016. The Vatican then gave its approval, with, Sr. Mary Grace said at the time, “the understanding that the values and mission established by the Pallottine Sisters will continue at St. Mary’s Medical Center after the transaction is complete.”

When the closure of the deal was announced, Jerry Gilbert, president of Marshall University, said he believed this new “comprehensive academic medical center” would become “a destination medical center – along the lines of some of the top clinics and hospitals in the nation.”

As CEO of the Pallottine Foundation of Huntington, Janell Ray has come to know the sisters well.

“You have a group of elderly sisters, and this has been their way of life for their whole life,” Ray says. “This is what they know, everything’s changing, and it’s hard for them.”

But the sisters are embracing their new reality.

Allen Smart, founder of PhilanthropywoRx, based in Winston-Salem, North Carolina, serves as a consultant to the Pallottine Foundation board. While acknowledging the sadness the sisters are experiencing with the sale, he sees this transition into the public-health sphere as an opportunity to more proactively help define “what a healthy community means.”

“The sisters said, ‘Well, okay, we can’t continue to do business the way we’ve always done it. So what can we do?,” Ray says. “What can we do to continue our ministry to the poor, to the sick?’”

“Hospital work is changing,” Sr. Joanne says. “It’s changing gradually and it’s changing rapidly. It’s not just within the walls of the hospital. Through the foundation, we can also see that people are taken care of in the neighborhoods where it’s needed so badly today for so many different reasons.”

“Properly executed and listening to the right members of the community, and engaging people, the opportunities to spread their mission are really a lot greater in the foundation situation than in the hospital situation,” Smart says.

He cites, for example, the opportunity to advance services for pregnant women struggling with opioid addiction.

Sr. Mary Grace sees this next step as a means of advancing “the values of our pioneer sisters.” Her message to the new leadership: “You know what we value and what our mission is, and we expect you to carry that out. We’re turning it over to you.”

“You hand it over to the laity and let them take over,” she says. “Educate, and move on,” exactly as Vincent Pallotti would have it.

A few miles from St. Mary’s Medical Center is a cemetery where so many Pallottine Missionary Sisters have been laid to rest.

Sr. Terence says that when she visits, she’s drawn to the dash on the headstone that separates the dates of a sister’s birth and death. “That dash is all the things they did in life,” she observes, “and nothing’s put there.”

“There’s too much to put there,” Sr. Mary Grace offers.

“The Lord knows what was there,” Sr. Joanne affirms.

As do so many in the Huntington community. During the Great Depression, the hungry came regularly to the back of the hospital to be fed by the sisters. For years after, Sr. Joanne says, people would recall how “had it not been for the sisters with the bread line,” their families wouldn’t have survived.

When out in the community, Sr. Mary Grace says she’s often asked, “‘Is Sr. Joanne still around? Is she still working?’ She’s still working.”

As her 90th birthday approaches, Sr. Joanne arrives for a couple of hours of work three days a week. She now does pastoral ministry in oncology, pediatrics and obstetrics.

In a video chronicling the history of the Pallottine Missionary Sisters, Sr. Mary Grace notes that, “One thing Vincent always said is, ‘We’re not going to be many… We’re going to be few, but we’re going to be able to carry on the work.’”

A new chapter in this legacy commences.