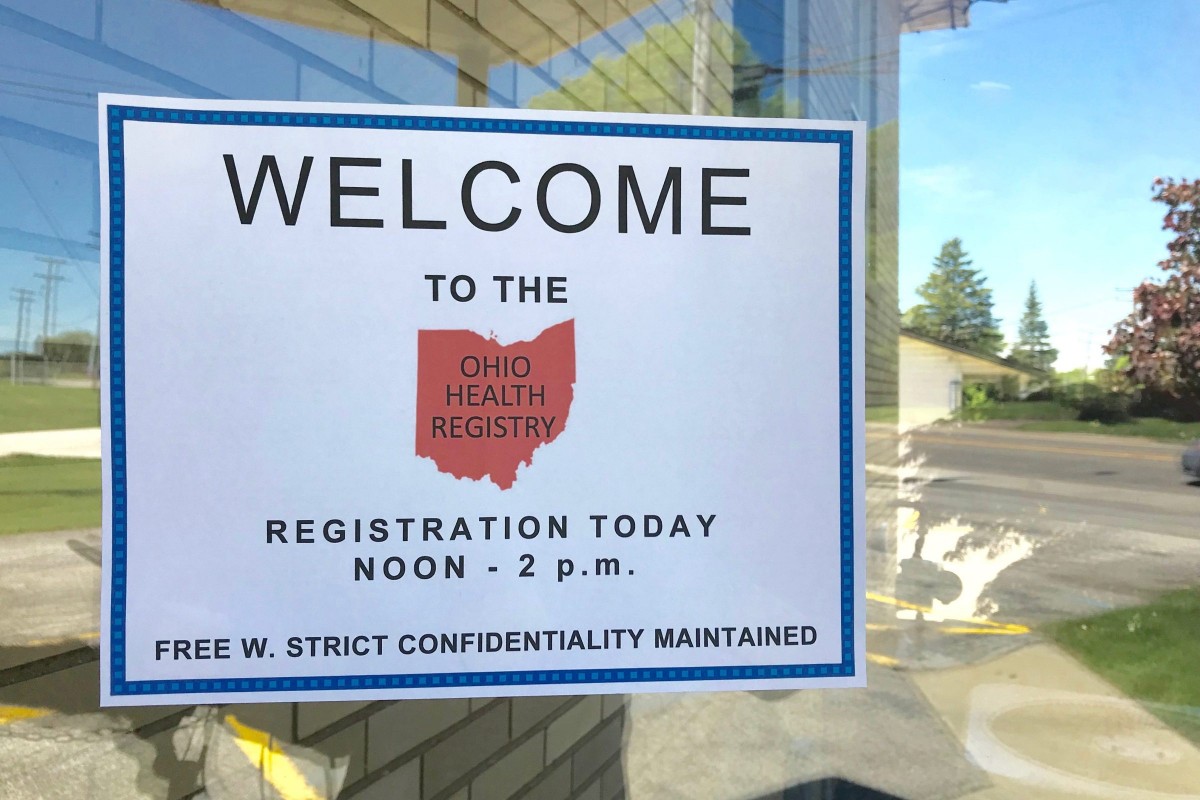 The Ohio Health Registry, started by a physician, hopes to sign up 200 people who live near oil and gas activity. Photo: Julie Grant

A dozen people are scurrying around a church basement in Youngstown, Ohio. They’re arranging tables and chairs, setting up paperwork and hanging up signs that read, “Ohio Health Registry.”

“The Ohio Health Registry is really an attempt to collect the contacts of people who live close enough to any aspect of shale development, that they might be affected,” said Dr. Deborah Cowden, a family physician from the Dayton area, who started this effort.

Cowden drove three and a half hours east this morning to organize the registration, while others came in from Oberlin, Cleveland and Lake County to register people in Youngstown.

“This is the medical questionnaire, and I’m going to read some instructions,” a registrar tells one person who has shown up to fill out the forms, which takes about 15 minutes.

Participants are asked about their proximity to gas development, and about any current health symptoms – everything from levels of fatigue, nausea and asthma, to whether they have a diagnosis of cancer and their mental health – and their family health history.

Martin Senjanec, age 60, who is a truck-driver, filled out the registration forms at a similar event in nearby Lowellville. He’s heard about a new frack waste injection well being permitted near his home. “I live less than a mile from what they’re building there, and I’m worried about it,” he said.

Senjanec remembers the magnitude 3.0 earthquake near here five years ago, that Ohio regulators linked to fracking. He’s also concerned that this area has become a dumping ground for fracking wastewater, a high salinity, chemical-laced brine.

Senjanec doesn’t think the state is ensuring that his drinking water well will be protected from contamination.

“They say it’s not going to harm. I have well water, all the people around here have well water, and that’s what I’m worried about. If that hurts that…once the well is contaminated, you can’t do nothing with it,” he said.

Senjanec doesn’t know how the health registry will help. “I’m not sure, to be honest with you. It might not do anything, I don’t know,” he said.

Links Between Fracking and Health

More and more studies have been making connections between living near gas development, and the risk of some health problems, like headaches and anxiety, low birth weight babies and cancer.

Cowden wants the health registry to provide data that will help further this kind of research, as fracking continues to grow in the state.

“If we are going to do this, why are we not attempting to keep track, so that we might be able to help people if they have a problem?” she asked.

Ohio regulators say they do respond to health concerns. But Rebecca Fugitt, assistant chief of the Bureau of Environmental Health and Radiation Protection at the Ohio Department of Health, says they don’t get many complaints from citizens about the fracking industry.

The Ohio Department of Natural Resources, which regulates the oil and gas industry, also gets few health complaints from people living near these operations. The Allegheny Front analyzed thousands of complaints by citizens to ODNR between 2009 and 2018, and found just ten reporting headaches, rashes and breathing problems. But ODNR did receive 438 complaints about odors, according to The Allegheny Front’s research. Certain odors can indicate pollutants in the air.

Fugitt says the health department does respond to citizens who think pollution from oil and gas development, or anything else, is harming their health.

“We work with them on a case by case basis to investigate their complaint,” she said. “And then if necessary we coordinate with other state agencies to collect environmental data as needed to respond to their concerns to determine if they have been exposed to any contaminants.”

Advocates Say Responding to Complaints Is Not Enough

But some health advocates say Ohio Department of Health’s efforts to respond to individual complaints is not enough.

“I’ll tell it like it is, I think it’s shameful,” said Raina Rippel, who runs the Southwest Pennsylvania Environmental Health Project.

Rippel wants the government to pro-actively collect community-wide health data on people in shale gas communities, so it can better regulate the industry, and protect public health.

Pennsylvania and Colorado do have registries for people living near the oil and gas industry to report their health concerns. But Rippel says these efforts are inadequate.

So her organization started a national health registry for fracking in 2017. An analysis of the first 100 to register found that people living within a quarter-mile of a gas development were more likely to report coughs, headaches and anxiety, compared with those a mile or more away.

She says this data should be collected in a more systematic way.

“We have to do our best to fill in the gap,” Rippel said. “I think that this is really us, these small groups, these groups that don’t have a lot of resources, doing the work we know needs to be done. Hopefully, the states and/or the federal agencies will ultimately pick up the ball that they’ve dropped.”

Marcellus Drilling News, an industry publication, criticized Rippel’s project, writing that it encourages people to blame every headache and cough on gas development.

The group behind the Ohio health registry plans to offer its database to scientists.

Researchers say there could be some use for this data, but there is concern about the validity of citizen-led health registries.

Brian Schwartz, Professor of Environmental Health and Engineering, Epidemiology and Medicine at Johns Hopkins Bloomberg School of Public Health, whose research has found an association between fracking and exacerbation of asthma in nearby residents, would be concerned that participants in the health registries might not be representative of the community at large.

Elise Elliott is a postdoctoral fellow at the Harvard T.H. Chan School of Public Health, whose study found a link between how close people in Ohio live to unconventional gas wells and reported health symptoms, like stress and fatigue.

She says health registries can still be helpful.

“These types of studies really help with hypothesis generation,” Elliott said. But to be useful to researchers, she said, “It really matters how the data is collected and what kind of data is collected.”

Her registry so far has collected information from about 65 people, and with more events like the one in Youngstown, is hoping to reach 200 by the end of the year.

This article was originally published by the Allegheny Front.

This is part of the series, “Who’s listening?” examining claims made by Ohio residents, and how state regulators have responded, supported by the Fund for Investigative Journalism and the Sears-Swetland Family Foundation.

Check out the Pittsburgh Post-Gazette’s series Human Toll on the health impacts of fracking.