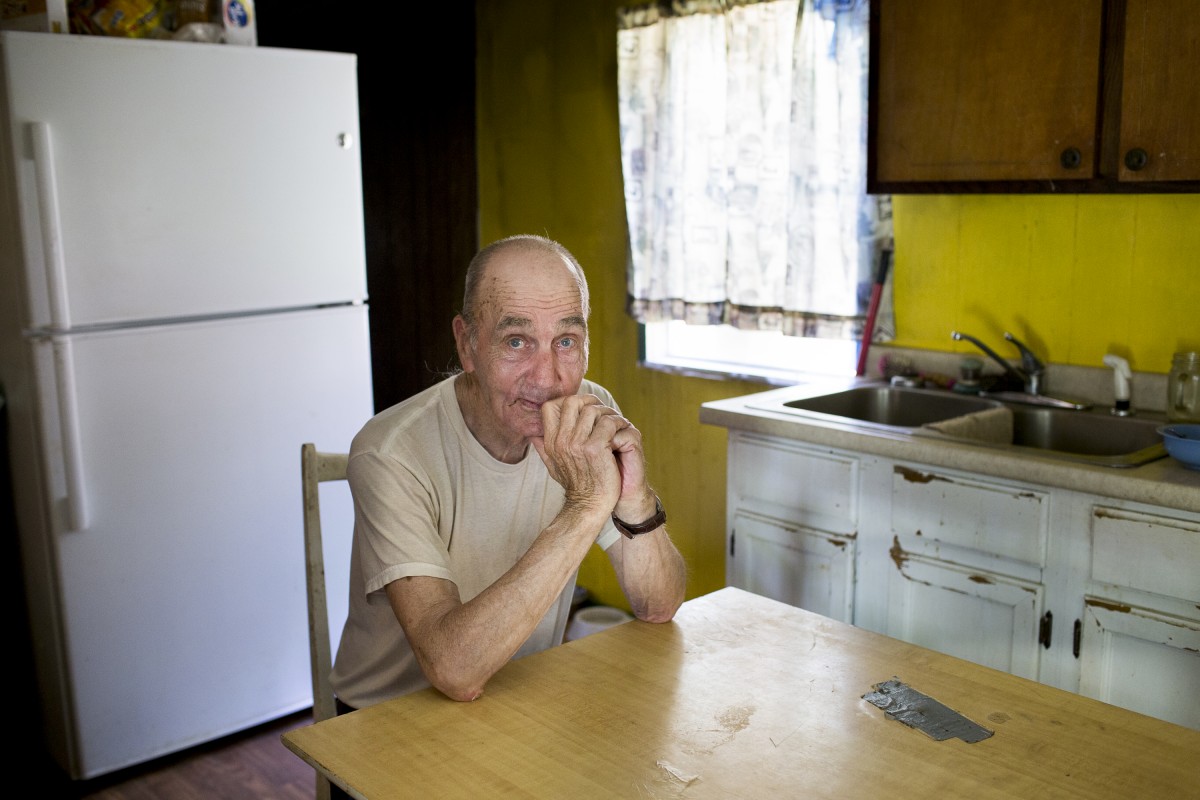 Paul Crisp, 76, sits in the kitchen of his mobile home in Whittier. He has trouble making ends meet and benefits from groups like Living Waters in Swain County that provide hot food to the community. Photo: Matt Rose/Carolina Public Press

This article was originally published by Carolina Public Press. It is part two in a year-long series of stories focused on food insecurity in Western North Carolina, titled Faces of Hunger.

Paul Crisp of Whittier came March 20 to the Living Waters Food Pantry and Resource Center, located across Swain County in Cherokee, and took a seat outside on a wooden crate.

He drove a school bus for 37 years, a taxi for four more and helped build the highway to Dillsboro. But at age 76, he has little to show for a lifetime of hard work, he said. He only draws $441 a month in Social Security, which barely pays the bills.

That’s why he was there at the food pantry. That’s why, he said, he’ll need to find a job again. He’ll be 77 this month.

Women and men his age and younger, some with kids in tow, gathered around outside Living Waters Lutheran Church waiting for the pantry in its downstairs garage to open. Many of them come every time it’s open — for food, for clothes, for housewares, for a job and for a chance to be encouraged by a group that cares.

“I don’t know what I’d do if this place wasn’t here,” Crisp said. “I’ve been coming two or three years. When I run out of things, I come up here and get me some stuff.”

He scanned the crowd, pointing out the children he once drove to school who are all grown up now and waiting in line just like him.

Crisp lives alone, but in his need, he’s not alone.

Of the 14,730 people living in Swain County, nearly a quarter live in poverty. One in five face food insecurity, despite most of them having a job if they don’t have a criminal record.

“They think poverty is young people that are just too lazy to work,” said Lisa Russell, who runs the pantry. “No. Poverty is every age, and it’s every situation you can (imagine), and it’s not that they don’t want to work. We had a lady up here, she’s 71 and just went to work up here at one of the motels because she can’t make it month to month.”

Russell and her husband, who pastors the church on Locust Road where the pantry is housed, said they were called there 11 years ago. He is the only ordained Cherokee pastor in the Evangelical Lutheran Church in America.

When they came to the church, only two parishioners were left. It took the Russells about two years to rebuild it. Then they visited the tribal leaders of the Eastern Band of Cherokee Indians to see what other services they could provide.

“We talked to the elders,” Russell said. “They said, ‘Well, one of our biggest situations is our commodities that the government sends us. We just don’t get that much.’ And at that time they didn’t … and they said, ‘We’ve got so many hungry people.’”

So the Russells looked into starting a pantry.

“It started off as … we saw a need and we said, ‘OK, we’ll do this little pantry, and it’ll be cute. We won’t have to do much,’” Russell said with a laugh.

“We beg, plead and write grants. And the reason is, then they can’t tell me who I can serve and who I can’t because if a person walks up here and they’re $5 over, I’m not going to look at them and tell them they can’t have something.”

The pantry serves people of all ethnicities and covers both Swain and Jackson counties. The pantry started with three people and one yellow wagon, nicknamed “Old Yeller,” to help carry the food to the cars, Russell said.

Now, Living Waters serves “anywhere from 525 to 700 families” a month, Russell said. “We have done as many as 2,100 individual people during a month,” she added. “I’m all over the place. When I wake up in the morning, my phone is blowing up.”

But it’s more than a food pantry. Living Waters also helps people, including some with criminal records, connect with companies that offer on-the-job training. Stuffed animals are suspended from the pantry’s ceiling for any kid who wants them. Living Waters has a clothes closet and boxes of housewares, toiletries and other items up for grabs.

Russell keeps a list of the things people need, from furniture to appliances to beds, and their phone numbers in her office that is half-commandeered by pantry boxes. Those who suffer house fires, face losing their kids to the Department of Social Services or other emergencies advance to the top of the list. She has partners and resources in both of the Carolinas, Georgia, Kentucky and Tennessee to help her find what the clients need.

“Everybody wants to fix the world, but they want to do it the simple way, and there’s nothing simple to poverty,” she said.

“People say we can get ’em jobs, we can get ’em housing, we can build HUD housing. Well, that ain’t gonna do no good if they don’t have a job to pay the rent or to turn the electricity on. Poverty is not simple. It’s a very complex situation. But most people want to look at one little aspect of it, and that’s how they’re going to save the world.”

The pantry focuses on the individual, Russell said. The Russells listen. They care.

“We don’t judge them,” she said. “We don’t live their lives. And that’s part of how we can get through to some of them where others can’t. We meet them where they are,” Russell said. “They can do more than they think they can do. And most of the time it is, they just need to be encouraged. They need to be listened to. They need to be told, ‘It’s not crazy to have a dream. It’s crazy not to follow your dream.’”

Russell asks nearly all of them about their dreams and ambitions.

“They have dreams. But they’re in this rut of intergenerational trauma and crap. Maybe mom never graduated high school, so mom can’t help them out. Mom’s been in poverty their whole life. They’ve been in these systems their whole life. They want out of these systems,” she said. “They’ve got these dreams about what they really want to do, but there’s nobody to help them and believe in them. So a lot of them, when they come up here, especially our little young mothers (I ask), ‘What was your dream before you had that baby?’”

Then, she dusts the cobwebs off those old dreams and breathes new life into them with small steps to make it real, Russell said. Giving them a three-year plan would overwhelm most of the people just trying to get through the day, she says, so Russell breaks it down into a week at a time.

Getting Help, Giving Back

She estimates that 95 percent of the people the agency has helped find work have stuck with the program. Some have even gone on to attain higher certifications and degrees. And the ones who are helped at the pantry almost always return to help others.

“This is their community. This is not a free handout. This is a step up,” Russell said. “I mean, they hit a speed bump, so help them over it. It’s just a step up, that’s all it is because most of them don’t want to be in the situations they’re in. Some of them do … but for the most part, they don’t.”

Most of the people she serves are no stranger to hard work, she said, and if survival skills could get them into corporate offices, they’d all be CEOs.

“They grew up helping their neighbor. They may not have a pot to pee in, but if their neighbor needs something, they’re gonna give it to them, and that’s how it works in a community,” Russell said.

Laughter and jokes echoed through the pantry with the almost rhythmic calls of “Coming through,” “Wagons to one side,” “Hey, darling!” and “We’ve missed you.”

Then come the shouts of a name for the next “shopper” to step on down.

“Paul!” shouted Dorine “MacGuyver” George. She was dubbed MacGuyver when the others around her noticed how she had a knack for fixing just about anything, like the hero of the television show by the same name. It was Crisp’s turn.

He quietly stepped inside, smiled softly at the workers and made his way through the labyrinth of aisles picking out the staples that would have to last him until his next trip. He estimated he had just enough gas to get home from there.

Ashley Parrish has a college degree. She majored in social work but suffered a stroke on her first day at the job.

She now lives in subsidized housing in Swain County and came to The Giving Spoon on March 28 to get meals for her and five of her neighbors in Bryson City.

“This place is great,” she said.

“Our meals on Thursday nights are free to anyone who comes through that door, no questions asked,” said Kathleen Burns, who started the program after a long career in social work.

“Through all of my work, and especially the last few years, because I would work with families and children in their homes, I would just see the food insecurity.”

She’d seen the same thing from having worked with home health, hospice and with elderly people, Burns said.

She wanted to start a meals program in her home county, something others had talked about for years.

“We just kind of formed a committee and we said, ‘Let’s do this,’” she said.

The Giving Spoon operates from a restaurant-style approach where people pick from a menu, and volunteers serve them food on glass plates with real silverware.

Mackenzie Royce, 10, comes each week to help her family volunteer at The Giving Spoon. She is the meal site’s youngest volunteer and often leads the call in her family to come and serve. She attends a charter school in Bryson City and hasn’t seen a lot of need among her peers, but she sees it at the pantry.

“Our program is not serving just a hunger need. It’s serving a lot of other needs and it’s also bringing this community together,” Burns said.

Emily Weaver is a Carolina Public Press contributing writer. Send an email to [email protected] to contact her.