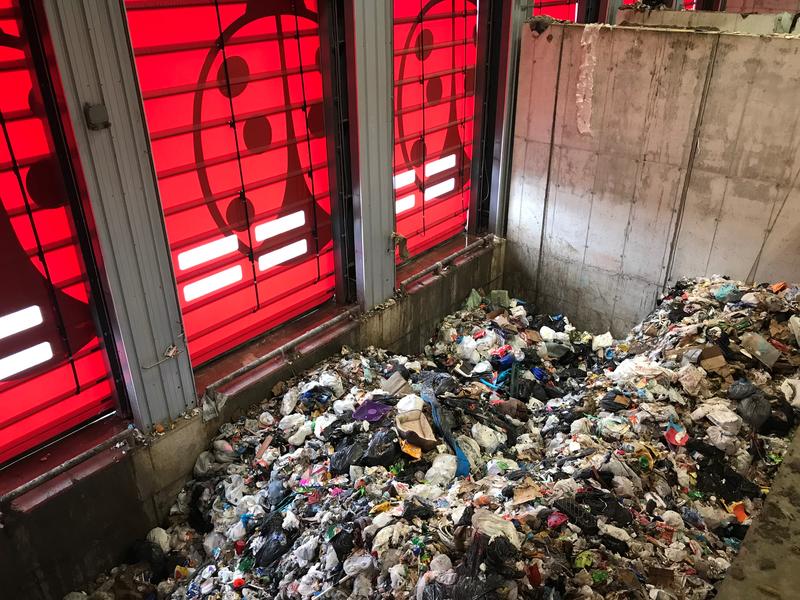 Today, most of our trash ends up in landfills. In the United States, we produce more than 200 million tons of trash every single year. But what if we could turn some of that trash into fuel? Well, it turns out a large portion of the residents in West Virginia’s Eastern Panhandle are having their garbage turned into fuel – even if they may not realize it.

Emily Dyson opens a gallon sized Ziploc bag full of soft, confetti like material. It has no smell, and it looks kind of like colorful, shredded fabric. This stuff was garbage, but now it’s been broken down, cleaned and can be used as a fuel source.

Dyson is the Director of Science Research and Development, Director of Safety, and formerly the Construction Manager at Entsorga West Virginia – a new waste-to-energy facility located in Martinsburg.

There are similar efforts to turn trash into energy elsewhere in the United States, but Entsorga West Virginia is the first in the country to use a unique technology called HEBioT, or high-efficiency biological treatment. It speeds up the process – turning trash to fuel in less than three weeks.

Entsorga’s technology senses and separates garbage to collect bio-mass, plastics and other carbon based materials. Then, through the use of large fans and mulch, yes mulch, the garbage is cleaned, composted, then separated and shredded, and can then be used as fuel.

Entsorga is based in Italy with 14 locations around the world. Its West Virginia plant is the first Entsorga facility in North America. It employs 14 full-time employees, ranging in salaries from $13 to $25 an hour. Thirteen of the 14 employees are West Virginia residents.

Dyson said Entsorga’s technology will solve both waste and fuel problems but is only one piece of the puzzle.

“From a waste perspective, there’s not going to be one technology that’s going to solve the waste problems of the U.S. From a fuel perspective, there’s not going to be one fuel, one power source that’s going to fix the energy issues that we face here, but you might as well be using waste, because that’s a definite recyclable commodity. Everybody makes waste,” she said.

Dyson said nearly 80 percent of garbage that comes to Entsorga will be diverted from a landfill, and at least half of that will be turned into fuel – fuel that will be used at a local cement factory in Berkeley County. Entsorga’s fuel will also replace a portion of coal used there.

“It burns cleaner than coal. The cement plant will use up to 30 percent offset, or supplement of their coal,” she explained.

Entsorga West Virginia opened its doors in March 2019, and it’s having a considerable effect on lessening the amount of garbage going into a landfill.

But how does garbage become the fluffy stuff in that Ziploc bag?

Residents in West Virginia’s Berkeley, Jefferson and Morgan Counties take their garbage out to the curb once a week, like anywhere else. But only Apple Valley Waste  customers see their trash sent to Entsorga.

Their trash is picked up and brought to the Berkeley County Solid Waste Authorityalong Grapevine Road in Martinsburg.

The Entsorga facility sits just behind the Solid Waste Authority on 12 acres of land.

The garbage trucks are weighed, and then the contents are emptied into the Entsorga building.

After the trash is dropped off, Entsorga’s HEBioT technology begins its work. There’s no human intervention in the Entsorga process, just the employees who operate the machines and watch the monitors.

A large screen shows multiple camera views of the machines at work — spinning, cleaning, or shredding the garbage.

Dyson said the waste will sit in what’s called the bio-oxidation hall for a couple weeks, while a large fan system sucks and blows air through the ventilation system.

“And that is what accelerates that composting because we’re drying that material out fast. What normally takes three to nine months, we’re doing in that 10 to 14, 16 days,” she said.

Mulch plays a big part of the ventilation process by absorbing and breaking down the garbage smells. It helps to clean and compost the trash that’ll eventually become fuel.

But getting Entsorga to locate in West Virginia has not been without its struggles. It took ten years to get all the permits cleared – in part because the facility was a brand new thing for the state.

And there was also some pushback from community members.

She said most of the concerns came from a lack of understanding about how the technology works.

“It’s hard to wrap your head around [the technology] unless you see it,” she said.

There was also some opposition by landfill companies.

“If you’re a landfill; if you’re a facility that’s going to lose a lot of intake because of this facility, you might be upset, and you might get involved and slow it down. So, we had some of that,” Clint Hogbin said.

Hogbin said the Eastern Panhandle needed a waste-to-energy facility, simply because of the rate at which the area is growing – to find an alternative to landfilling. And he said he hopes Entsorga West Virginia will be an example for the rest of the country.

“I’m hoping those solid waste decision makers will come to Martinsburg, visit the facility, and I’m hoping in that way, the ripple effect would be that West Virginia changes the direction of management of solid waste,” Hogbin said. “It might be nice to be first at something.”

Entsorga West Virginia’s fuel product is being utilized by one local cement plant in Martinsburg called Argos. Argos is also an Italian company.

But both Hogbin and Dyson say there are other cement companies who may contract with them in the future, and there’s the possibility that other companies may have an interest in the product.