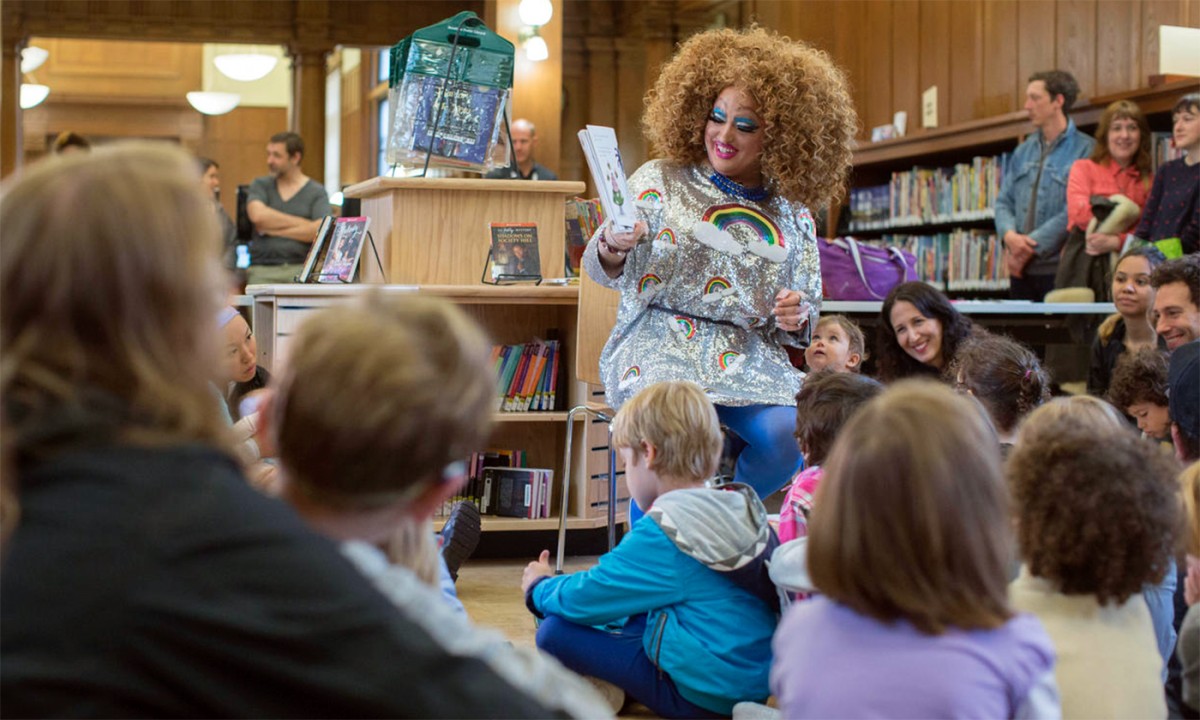 Teaching inclusivity and diversity to kids is important—but especially where LGBTQ role models are less visible.

In patent leather stilettos and sparkling diamond eyelashes, Rylee Hunty closely held the attention of dozens of bright-eyed schoolchildren. Perched on a thronelike chair, his legs primly crossed and tucked to the side, Hunty took them page by page through My Wish for You, a children’s book about embracing curiosity, strength and vulnerability.

His voice was soothing to the babies cradled by their mothers and dazzling to the 8- and 9-year-olds sitting cross-legged on the floor. When the story ended and Cheetah Kane Morgan prepared to read next, Hunty engaged the kids with a game of “Rylee Said.” They literally jumped at the chance to play. One little girl asked if he would be her best friend.

The fun and games were part of a reading program called Drag Queen Story Hour, and Hunty, who has been a drag queen for the last six years in upstate South Carolina, helped organize and run this event at Five Forks Library in Simpsonville, part of the Greenville area. Finding other drag queens in the upstate area to volunteer was easy, Hunty said, because “all the girls were more than willing to donate their time for a great cause.” He believes that teaching inclusivity and diversity is important at any age—but especially in areas such as Greenville, where the LGBTQ community is not very visible.

“This event allows children to realize there may be people just like them or teach them not everyone is the same,” said Hunty, who won Miss Upstate Pride 2019 in March.

Originating in the libraries of San Francisco under queer literary arts nonprofit RADAR Productions, Drag Queen Story Hour gives children “glamorous, positive, and unabashedly queer role models,” said co-founder Jonathan Hamilt, and it aims to encourage their imagination and natural gender fluidity. Since 2015, drag queens have read at libraries and bookstores but also restaurants, parks, community centers, churches, hotels, yoga studios and even museums. In four short years, the story hour has grown into its own nonprofit, with 35 chapters in U.S. cities and towns, including New York and San Francisco but also Mobile, Alabama, and central Tennessee. The idea has become so popular that chapters have also been formed in Sweden, Japan, Germany, Australia and Puerto Rico.

Queens read classics like Dr. Seuss’ Oh the Places You’ll Go as well as stories about difference and pride in oneself. They learn about a little boy who is mesmerized by a woman on a subway and wants to make himself an outfit as beautiful as hers, in Julian Is a Mermaid. They hear that no matter the color of their eyes, the size of their bodies or the things they like to do, they can believe in themselves, in I Am Enough.

Studies show that LGBTQ youth have a higher risk of developing emotional, health and social problems as a result of prejudice within their own families, communities and religious institutions. Having more positive interactions regarding their identities, such as being read to by a drag queen, can make them happier and healthier.

In addition to storytelling, the program hosts other fun activities for kids, such as making crowns and wands out of beads and pipe cleaners, coloring pages from a “Dragtivity book,” or singing songs—anything to engage their sense of play and curiosity. The program offers special readings to bilingual and autistic children and has plans for sign language, too. Older kids are treated to book clubs, design workshops and makeup tutorials.

It’s well-established that reading aloud to children can have positive effects on their social, emotional and behavioral development. But Drag Queen Story Hour has stirred up controversy.

In January, Taylor Cox, a member of the Greenville Tea Party, circulated an online petition to try to stop the Simpsonville event. A couple of hundred protesters showed up outside the library, but they were outnumbered by a slightly larger group of counter-protesters, in addition to the 400 people standing in the cold and rain to hear the queens read inside. Camielle Reed of Greenville was on the counterprotest side of the library parking lot, divided by police tape to keep the opposing groups a safe distance apart. She went to support a friend who was bringing her daughter to the story hour.

“This is about entertaining the kids, giving them something different and culture, opening their eyes to the real world,” Reed said. “I think the more people that come to support that, hopefully, draws more attention than the negativity from some people.”

Hamilt said that opposition is to be expected in these areas, and that is where Drag Queen Story Hour is needed the most.

“Whenever there is an intellectual shift in society that threatens masculinity or makes femininity equal, it scares people,” Hamilt explained. “Often that fear comes out in anger. Protests and opposition are expected in those communities.

“LGBTQ-positive programs like Drag Queen Story Hour are a vital part of making the world a safe and affirming place for all children. LGBTQ children need role models, and all children should learn to embrace gender diversity and learn empathy.”