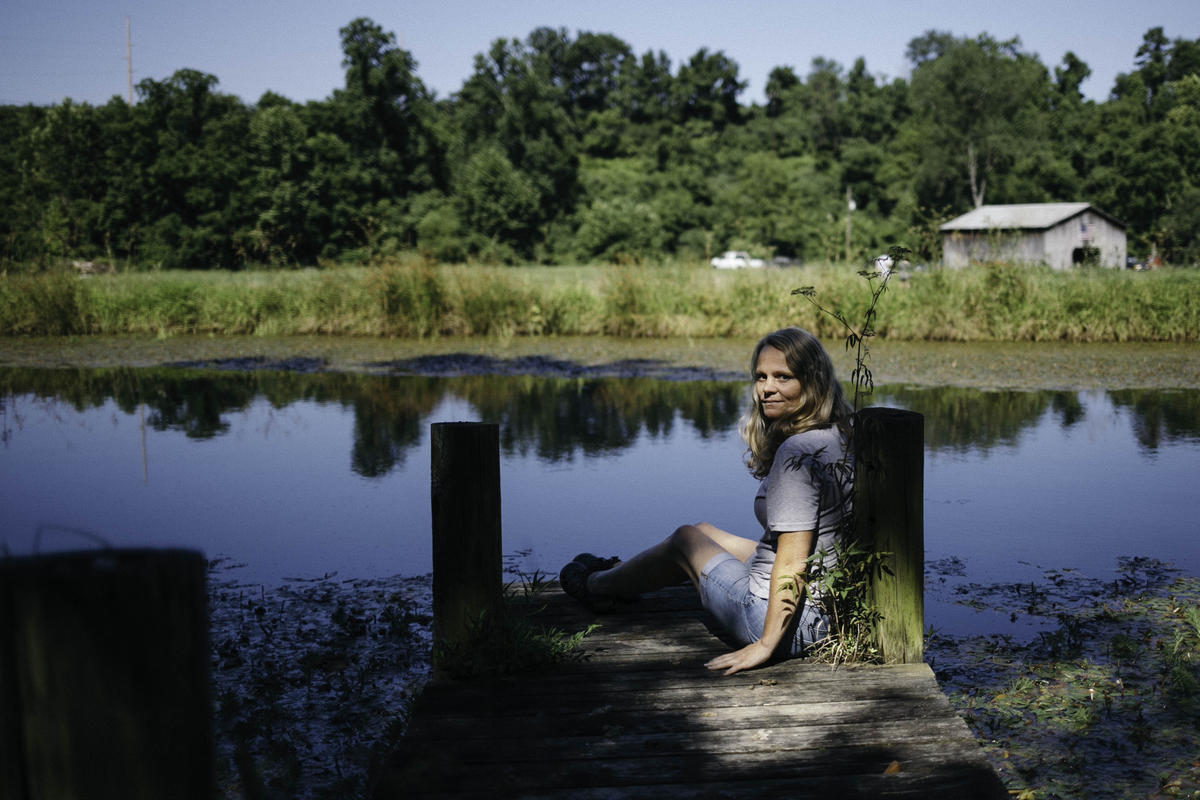 At age 15, Crystal Snyder was on her own and felt the authorities breathing down her neck.

Her mother, a truck stop worker in Huntington, West Virginia, left with a long-haul driver. Her father was in prison. Crystal wasn’t going to school and spent most of her time with her boyfriend, an 18-year-old Pizza Hut employee. She feared Huntington High School would note her truancy, triggering an investigation that could send county social workers to take her into foster care.

Snyder, now 39, said she was “completely wild then.”

“If I was mad and wanted to kick a hole in the wall, I would just do it,” she said.

Crystal failed the seventh grade twice. Her school district had placed her in a program for students with learning disabilities. She had no interest in school and feared any institution that could gain power over her.

At the age of 15, her mom called from Texas with an idea: Get married. If she and her boyfriend were wife and husband, it would prevent her from becoming a ward of the state.

Snyder also, understandably given her circumstances, yearned for a sense of permanence. “I think I wanted a family,” she said. “It gave me the stability I was craving.”

In 1996, two weeks after her 16th birthday, she, her boyfriend and her aunt traveled to Kentucky. West Virginia was then one of several states to require a blood test before marriage, an antiquated effort to prevent the spread of sexually transmitted diseases between spouses. Neither had an STD, but they thought the lab work would delay the marriage–Crystal and her boyfriend were outrunning truancy officers. They brought the paperwork from Crystal’s mother signing off on the marriage.

After they got the license, the two were married at a rural chapel. Crystal’s aunt bought a $16 ring from the jewelry counter at a Walmart to act as the wedding ring.

A year later, she was working at a Taco Bell and living in an apartment in Huntington with her husband and a newborn son. That situation wasn’t sustainable.

About 12,500 people under the age of 18 are married each year in the U.S., according to a report from the Tahirih Justice Center, a nonprofit primarily focused on protecting immigrant women and girls from gender-based violence. Of those minors entering marriage, 87 percent were, like Crystal, girls marrying adult men. According to a Pew Research report, her home state of West Virginia has the highest rate of married 15-to-17-year-old residents in the U.S.

Minimum ages to marry and protections for minors vary by state but only two, Delaware and New Jersey, require a person to reach 18 in all circumstances before they wed. The 48 others have some stipulations for minors — often the consent of a legal guardian or a judge’s permission.. Sixteen states have no absolute minimum age, according to the 2017 Tahirih Justice Center report and a review of laws changed since. Some have laws that expedite the process if a girl is pregnant.

“People would be shocked to learn it’s so broadly permitted and it is so easy to marry a child in the States,” said Jeanne L. Smoot, senior counsel for public policy and strategy at the Tahirih Justice Center. One reason these laws and loopholes persist is state lawmakers have rarely revisited marriage laws. “In more than half the states we looked at,” she said, “no one had [changed] the laws in 100 years.”

Smoot said that minor-age brides are, expectedly, usually girls who have been neglected. Parents want out of the responsibility to care for them, and judges see marriage as a stabilizing option for their circumstance. When judges are involved, their role can range from careful arbitrator of a minor’s best interest to reviewer of paperwork, depending on the judge and the state laws that guide them, according to Smoot. “Some don’t think they have any discretion,” she said.

At their worst, these laws give cover to coerced marriages, Smoot said, or girls sometimes marry an abuser who impregnated them in communities where unwed motherhood is considered the most shameful fate for a female.

But in some states, these laws are undergoing a shakeup. Recently, groups like the Tahirih Justice Center, Unchained at Last and the Human Rights Campaign have launched state-by-state efforts that have caused some to further restrict marriage by age, including several in Appalachia.

These reforms made up for a preexisting dearth of protections, said Smoot. All four states previously had no minimum age, if certain requirements were met. Her group’s stance is that no one without the full legal rights of an adult should marry, but the recent tightening of laws is a start.

Two states in Appalachia haven’t touched their statutes allowing for child marriage. Pennsylvania allows for marriage with a judge’s approval at any age and allows 16- and 17-year-olds to wed with the approval of a parent or guardian. For two years, lawmakers have proposed bills to reform its marriage laws, but the effort hasn’t gotten to the governor’s desk.

These rates of marriages involving minors are low, compared to other recent years, according to West Virginia’s annual vital statistics report. Between 2010 and 2014, an average of 112.2 girls and 22.4 boys younger than 18 were married per year in the state. According to monitoring by the advocacy group Unchained At Last, West Virginia lawmakers have made no effort to change its statutes.

No one has answered why. Typically, changes to marriage laws are first reviewed by the judiciary committees of state legislatures. Sen. Charles S. Trump, the Republican chair of the Judiciary Committee of the West Virginia Senate, did not respond to multiple interview requests. Neither did Republican Delegate John Shott, chair of the state’s House Judiciary Committee. Delegate Barbara Evans Fleischauer, minority chair of the house committee, also did not respond to multiple interview requests.

Last year, Pennsylvania Rep. Jesse Topper reintroduced a bill to make 18 the minimum age to marry in that state. A previous proposal from other lawmakers died in the judiciary committees of Pennsylvania’s two legislative chambers during the last session in 2018.

Topper said he was moved by a visit from activists from Unchained at Last, who often lobby state legislatures in dramatic fashion, coming in wedding gowns.

“I grilled them pretty hard,” Topper, a Republican, said. “I favor small government. I didn’t want any more restrictions on people’s lives.” But he concluded that because judges and county clerks were involved, it is an action of government and the state was complicit in any abusive behavior that was protected or enabled through such a marriage.

“Our laws say at age 18, you’re an adult,” said Topper. “We don’t base that determination on maturity or anything else.”

According to the Pew data, 3.3 out of 1,000 Pennsylvanians between age 15 and 17 are married, which is lower than the national average.

Statistically, the outcomes of marriage among minors are bleak. The divorce rate is 59 percent within the first 15 years for those married younger than 18, according to one study. A report from the National Bureau of Economic Research found that women who marry as teenagers were half as likely to finish high school and four times less likely to graduate from college than unmarried peers. Another study correlated early marriage to the development of mental health disorders.

Snyder said she felt bored after a few years of fast food shifts and childcare. Her friends, who were graduating from high school, were drinking and having fun. She felt emotionally disconnected from her husband and once they separated, that gave her space to “sew [her] wild oats.”

“I would drop off my son any chance I had to go out to the club,” Snyder said. “There was drinking at my house every night for two years…I felt like I had missed out on my youth. My son probably saw things he shouldn’t have.” She didn’t elaborate.

After a few years, she became serious about her economic and parental responsibilities. Snyder earned her GED at 19, remarried and gave birth to a daughter. She worked in telemarketing and restaurants.

“I think I really grew up,” she said. “I worked my ass off to provide but those were really the best years of my life.”

Snyder has since separated from her second husband and works as manager at a farmer’s market and a handicapped van driver in Berkeley Springs. Reflecting her life’s path, she can only say, “I guess everything happens for a reason.”

Angie Settle, a nurse practitioner and the CEO and executive director of West Virginia Health Right, a nonprofit providing low- or no-cost health services, also married as a minor in West Virginia. She dated her husband John in high school.

“I just knew he was the one,” said Settle. He was polite, respectful and hard-working and he shared her Christian values. “Sometimes, you just know when you know,” she said — and she knew at 17.

John was 19 when they were married. He was studying chemistry at West Virginia State University. He asked her father for permission before he proposed, which he did at Christmas in 1989. Her parents gladly filled in the paperwork to allow her to be wed at 17, shortly after she graduated high school early.

The Settles moved into an apartment near West Virginia State University, where Angie matriculated to become a nurse. She later earned a master’s and doctorate in nursing. They are still married and have six children, the first born in 1998.

“We had time together before the kids were born,” Angie recalls. “We earned degrees. We bought property. We went on vacation to Las Vegas and Myrtle Beach.”

Neither regret marrying as teenagers.

“You start when you have nothing,” said John Settle, “so everything you build, you build together. I wouldn’t want it any other way.” Most people in his family are married by their early 20s, he added. Their oldest daughter is 21 and engaged.

Given the disparity between their early married lives, Angie Settle and Crystal Snyder have the opposite opinions one might expect of changing West Virginia’s laws to eliminate marriage among minors. Settle is for it. Snyder is against it.

“I could have waited until 18,” said Settle. “There was no reason to, in my case, but I wouldn’t mind if the law changed. You can wait a few more years.”

Snyder said what she needed at age 16 was not a prohibition against marriage; it was actual help.

“I think my mom did the best she could,” said Snyder. “If someone were there and given me support that would have made the difference.”

Snyder felt social services were inadequate to help her troubled mom and the lost teenager that she was. Her early marriage was a symptom of larger issue and changing the law have made those years less turbulent.

“We can do better as a society to address the unjust system of generational poverty,” she said, “and support kids.”

Nick Keppler is a Pittsburgh-based freelance journalist whose work has been published by The Gizmodo Media Group, The Financial Times, The Daily Beast, Slate, Vice, and others. His website is nickkeppler.com.