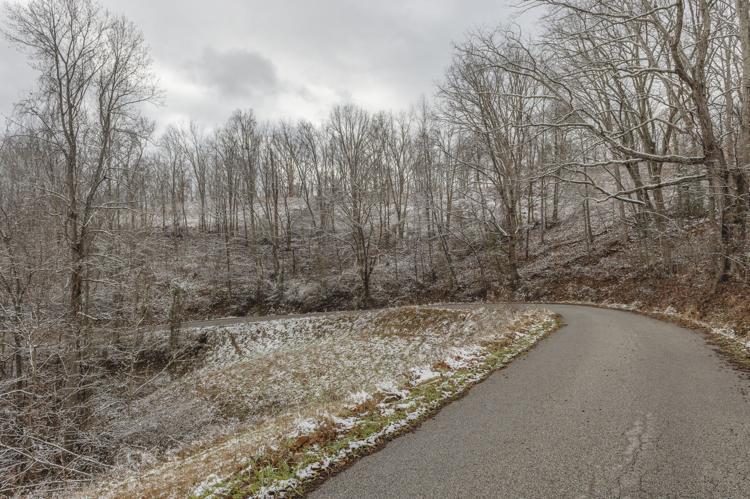 Allen Adkins and his silbings live off this curve in Harless Fork Road, in Lincoln County. Adkins remembers his father thought he'd die before seeing a paved road cut through the hollow. Today, Adkins wonders if he will feel the same about water. Photo: Greg Hudson/Charleston Gazette-Mail

Editor’s Note: This is the eighth story in a series titled “Stirring the Waters,” focused on the lack of clean, reliable drinking water in Eastern Kentucky and Southern West Virginia. Read the full series here.

In Southern West Virginia, reliable access to clean water doesn’t just mean getting what you pay for. Sometimes, you don’t have the opportunity to pay for it.

Allen Adkins has been trying for years to get water lines extended to his Lincoln County home. Without that, he and his family are left to depend on a set of wells that leaves them uncertain how long water will last each day.

“It’s just constantly watching the water — knowing how many seconds or minutes you can turn it on in the morning for breakfast and have enough left to last you for a bath at night,” said Adkins, a resident of Branchland. “It’s constant math, constant thinking, but I guess we’re used to it now.”

Adkins has lived in his hollow off Harless Fork Road for most of his life. His father built the house Adkins lives in now, his sister is right next door, his brother lives up the road, and Adkins owns another house a bit further back in the hills.

In his decades in the area, Adkins has drilled three wells on his current property, and several at other houses. His habit of counting developed years ago, after his first well began to run dry and he started to pick up on the signs. His current well has performed the best out of the three, only drying up temporarily a handful of times in the six or so years he’s had it. Still, he constantly worries what will happen when it — inevitably — goes dry permanently. He paid $3,000 to drill his last well, a steep price for the 65-year-old retiree, and he doesn’t think there’s much viable land left on his property to drill another one.

“We’re going to have to cut through those trees back there, behind the barn [to drill another well],” he said, pointing out his kitchen window, where a barn peeks through the woods, about two football field lengths away. “I don’t know if I can do it. I mean, I guess I can, I’ll have to, but it’s all getting exhausting.”

In 2013, Adkins and several of his neighbors and family members filed formal complaints with the West Virginia PSC. They wanted any of the surrounding water districts to extend service to their hollow.

“We have three water companies coming through [this area], and we can’t get either one,” his brother, Randy Adkins, who lives nearby, wrote on the complaint form.

On a line asking what remedy he sought, Randy Adkins wrote just four words: “To get clean water.”

Well water, when treated correctly and maintained, can produce perfectly drinkable water, but Allen Adkins does not trust his wells. Water testing has returned mixed results, and he doesn’t see himself paying for such tests regularly — between $100 and $200 for the testing itself, and depending on what’s found, up to hundreds more for chemicals to treat the water.

He’s been doing this for so long, the costs have added up, and he’s growing tired.

“So we just don’t drink it — it’s fine for bathing and laundry and all that, but we keep bottles around for drinking and cooking,” Adkins said, pointing behind him to the stove, where his son scrambled eggs for his granddaughter’s breakfast. “This would all be much easier, everything for us would be, if we could just get connected to something.”

In 2011, according to Adkins and the Infrastructure and Jobs Development Council, the Branchland-Midkiff Public Service District had plans and money for an extension that would run lines right to the Adkins property.

They were told the district ran out of money before the project reached their neighborhood. A staff memo issued by the PSC after complaints filed by the Adkinses indicates that’s true — cost estimates from the project engineer showed there wasn’t enough money.

If the Adkinses and their neighbors wanted to be connected to a water system, the PSC memo reads, they would need to pay $20,000 per customer.

When PSC engineers and other staff member weighs the benefits of an infrastructure project against how many people would benefit and the utility’s financial standing, it may find the project “monetarily infeasible,” meaning it can’t qualify for state funding. If that happens, residents are told how much they would have to pay out of pocket to make the project happen.

Since these projects are often expensive — especially in areas like the Adkinses’ hollow, where rough terrain means more difficult work– breaking it down for individuals doesn’t breed much hope.

“We don’t have that [money]. We just don’t,” Allen Adkins said. “Not a lot of folks around here do.”

Just a tenth of a mile down from his home a fire hydrant sits on his neighbor’s property. He said that’s where the public water service stops.

“Why would they give the man down the road here water and not give us water? Why do we have to pay that much money?” Adkins asked, sitting at his kitchen table and shaking his head in frustration. “How is he different than us?”

Many areas unconnected to water services are similar to the Adkinses property: small communities or hollows with a handful of people, buried behind mountains and hard to access.

It’s a challenge, too, to convince current customers to pay more to cover the costs of extending services to those areas.

“What we are seeing is an unwillingness by existing customers of a system to pay to extend service to new areas,” Swann said. “The fact of the matter is all the easy stuff has already been served. What’s left is way out, sparsely populated. There’s a reason no one has laid pipes there before.”

So, without public water, Allen Adkins continues to count.

Those in his home — a revolving door of children, grandchildren, cousins and other relatives — coordinate schedules for laundry, showers, doing the dishes and cooking.

His son and grandkids help him haul buckets of water into their home, but as he ages, it becomes more difficult. Power outages — which are impossible to predict and in some cases last days — knocks out the pump at his well, leaving the well unusable. He keeps barrels full of reserve water on hand, but he never knows if it’s enough.

Adkins doesn’t hold a lot of hope that he will ever see public water pipes run on his property.

He remembers being a boy, helping his mother fish water out of an old chain well.

“We should be past this by now, we should have more. It’s 2018,” he said, shrugging his shoulders and looking down at his kitchen table. “My father, when he was still alive, he didn’t think he’d ever see a blacktop road running through here, and he did, he was able to, just a few years before he passed.

“I wonder if that will be the same for me. If maybe my grandkids will be able to enjoy [clean water]. I wish I could tell you, I just don’t know, though. I don’t feel too confident.”