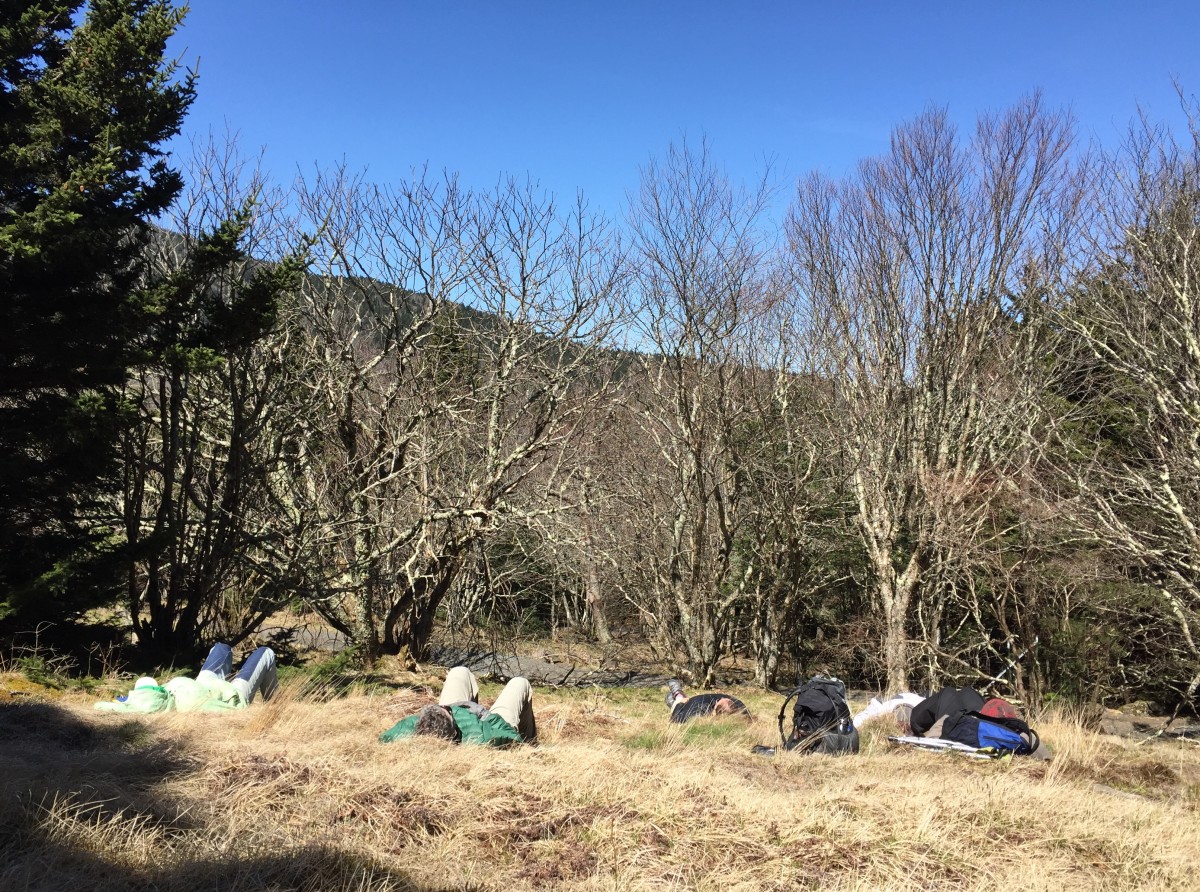 Participants in a forest therapy walk lay in the grass of Roan Mountain at Cravers Gap. Photo: Lisa Quatrale/Provided

Research suggests Appalachians experience poorer mental health outcomes than most Americans, but many residents already have access to a potential cure– right in their own backyards.

A growing number of Appalachia-based nature enthusiasts are starting a movement to introduce the region to forest therapy, a healing activity alternatively known as shinrin-yoku, or forest bathing. Though largely employed near urban areas, proponents argue the practice could help rural Appalachians with common health problems, like heart disease and stress, by lowering blood pressure and boosting the immune system.

Roanoke’s forest bathing program will, in some respects, reflect the government-funded sessions held in Japan, where the practice started. Just as Japan monitors the heart rates and stress levels of forest bathers in its national forests, Carilion Clinic is planning to collect medical data about Roanoke’s participants. Before and after each event, trained staff will measure each individual’s blood pressure and survey their mood. The data won’t be used for an upcoming study, but it will help Carilion further its goal of understanding the root causes of ill health in the communities it serves, Boush said.

“Forest bathing gives us a break from our busy lifestyles. You’re encouraged to put away your phones and really focus on your senses and nature,” Boush said. “Nowadays we’re all so busy that oftentimes we lose sight of being connected with our surroundings, our environment, or even our bodies.”

The activity’s social component, as well as the light physical activity it encourages, can be beneficial for anyone, especially as more and more Americans live the majority of their lives indoors.

Lisa Quatrale, a certified nature therapist based in Asheville, North Carolina, said attending a professionally run forest therapy session may help nature enthusiasts in rural Appalachia learn how to better connect with the outdoors when they engage in solo activities. It can also help them forge connections with others who are interested in improving their mental health by taking in the region’s beauty. 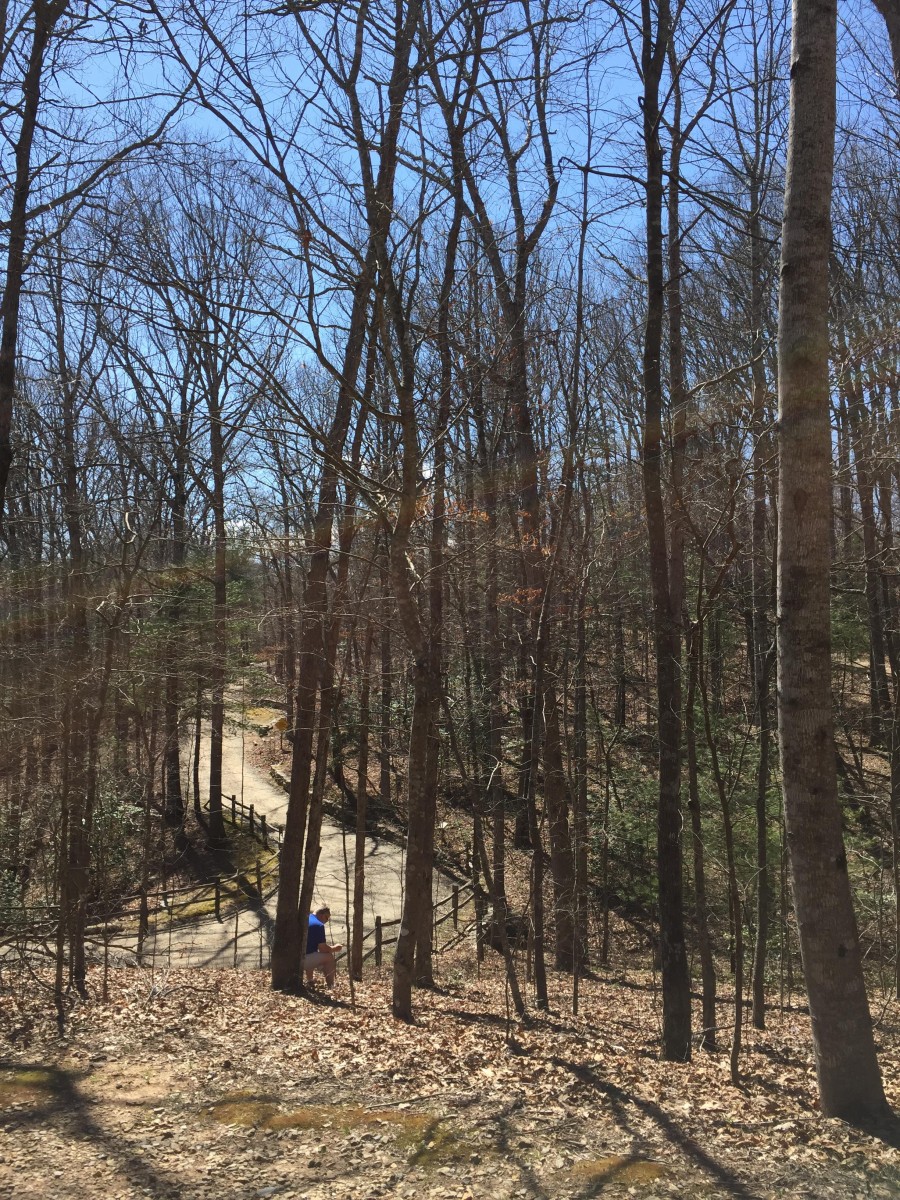 A forest bathing participant pauses in the woods during an event at a North Carolina arboretum. Photo: Lisa Quatrale/Provided

As an emerging field in the United States, forest therapy is largely promoted as a potential occupation by the Association of Nature and Forest Therapists (ANFT). The organization has trained guides in more than 40 countries and offers certification for those who want to lead the activity professionally.

Coral Fallon-Linzman, who serves as admissions and venue coordinator for ANFT, said that the association hopes to create a demand that would sufficiently support guides who make nature therapy into a career.

“We have found that our guide’s level of success depends on their level of engagement with their community, their business acumen, their engagement with forest therapy and its community, and what pre-existing structures may exist in the area that would support their practice,” Fallon-Linzman said.

Those who want to practice forest therapy, either individually or in a group, don’t have to go through certification with ANFT in order to conduct sessions, however. When Bill West, a Roanoke City urban forestry coordinator, became interested in forest therapy, he and Trees Roanoke president Jamie King looked for books written by scientists and medical professionals who were experts on the practice. He and King particularly relied on a book by Qing Li, a doctor and author who founded the Japanese Society of Forest Medicine, when creating Roanoke’s upcoming series of workshops. They also used the methods outlined in the book when conducting a late-October session, which served as a pilot event by which West and King could judge the demand for the 2019 program.

“We just decided to implement this program to see how it would go and what kind of response it would get,” West said. “We were so encouraged with the amount of turnout that we got. We think we had about 22 folks who came out.”

The pilot event in Roanoke may have generated that level of demand because of its low cost. Participants were encouraged to donate $15 to Trees Roanoke, but were not required to give that exact contribution, or any contribution at all.

Elsewhere, however, the cost of a guided forest therapy event can serve as a barrier. Quatrale said the sessions she leads at the North Carolina Arboretum cost $47; non-members are charged $57.

“I couldn’t even afford a forest therapy walk, so I would like to somehow provide it to people who don’t have money,” she said.

Despite the potential health benefits and the relatively low cost for some Appalachians, those living in the region have been slow to adopt the therapeutic practice. Multiple nature therapists have said the activity’s lack of popularity is partly due to its relative obscurity. Many rural Appalachian residents also feel that because they are surrounded by nature, they don’t need to actively connect with it, especially for a fee.

That makes it difficult for licensed therapists to make a living off of their practice. The demand is not yet high enough to supply a living wage. Successful forest therapists largely work in areas like Washington, D.C., where they can advertise their services to busy, stressed-out city workers.

“I’m glad I did the training, but here in the Shenandoah Valley, I couldn’t make a living doing it,” said Jamie Trost, a University of Virginia grad student who is certified as a guide, but doesn’t actively conduct forest bathing sessions. “Everybody is either a farmer or a sportsman here. People are not as starved for a nature connection.”

Finding a venue that’s willing to host the forest therapy sessions is also a challenge, Quatrale said. Although she now conducts several guided walks a year, it took Quatrale six months to convince the arboretum to add her nature therapy sessions to their adult education offerings.

“What really made that happen was the education director hearing a piece about it on NPR,” she said.

Quatrale said she plans to reach out to school systems as well, in hopes that educators might be interested in introducing forest therapy to children who may not spend enough time outdoors. She still believes that with enough time and patience, more rural Appalachians will become interested in the practice.

“I think the more education there is, the more articles out there, the more people will realize what it can bring to their lives,” Quatrale said.

Assessing The Damage From Mining: A 5-year Report

‘100 Days in Appalachia’: Call for Pitches