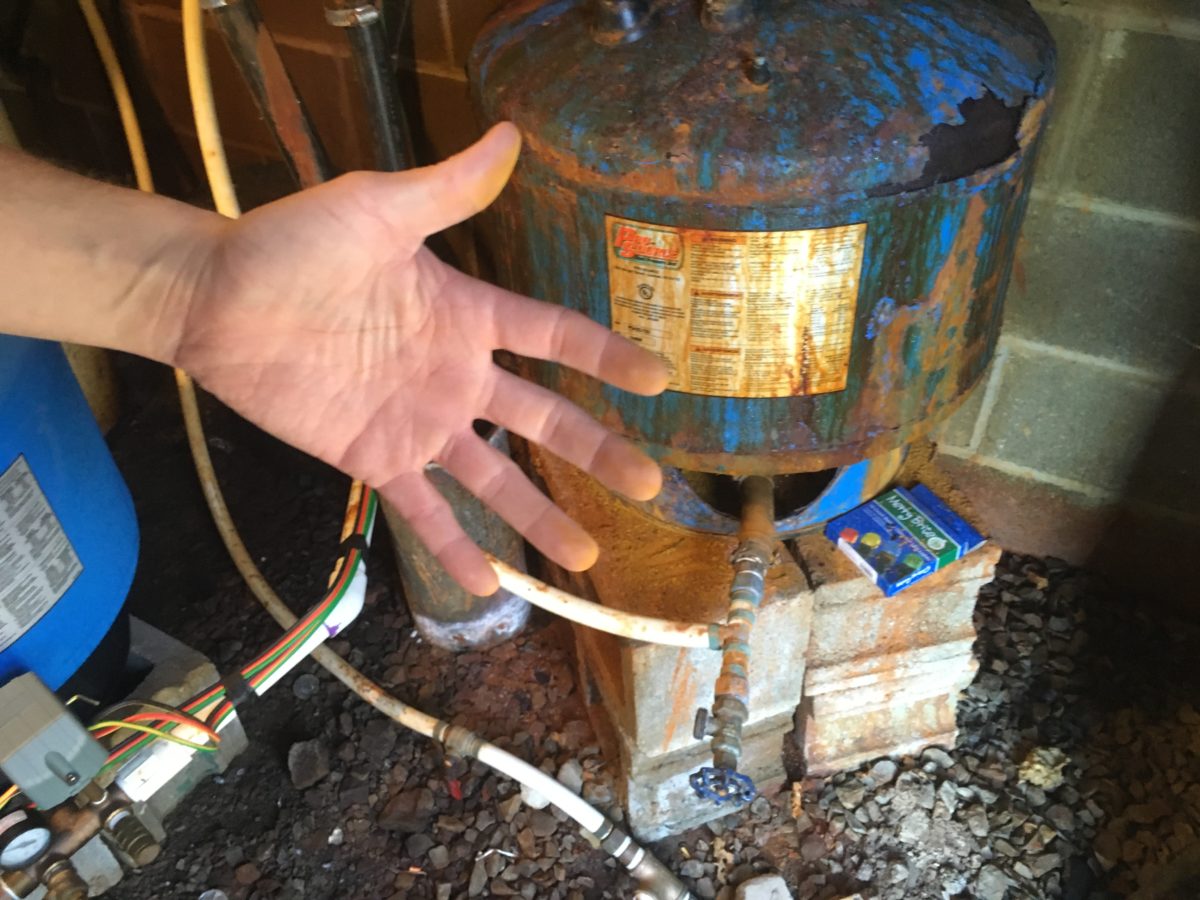 Jason Walker spends $50 per month on bottled water. He spends three hours each week standing by the small stream that runs near his house, pumping creek water into a thousand-gallon tank.

“You have to catch the creek at the right time, when it’s clear,” Walker said. “Whatever you pump, whatever the creek looks like, is what you’re going to pump, and that’s going to pump right into your house.”

Walker, 31, used to get water from a well he shared with his mother, Sherry Walker, who lives next door. But they noticed changes after mountaintop removal mining started nearby.

“The coal mine at the top of the ridge here, they let off a blast maybe around 2 in the afternoon. My windows will rattle, my dishes will shake,” he said. “You’ll actually feel the blast.”

Over time the Walkers’ well became unusable and then dried up.

Communities living near the large-scale surface mines have long suspected the practice was to blame for health problems ranging from asthma to skin conditions to cancer. A growing body of research supports those suspicions. But an advocacy group’s new report draws attention to the ways that science has been suppressed, and how the costs of dealing with the mining’s health risks shifted from industry to communities.

“For me the bigger question is not whether we should be mining coal or surface mining at all,” said Sarah Saadoun, of Human Rights Watch, which produced the study. “The question is how we make these decisions as a society. Are we considering all the evidence, and all the costs that are borne by the people who live around these mines?”

Mountaintop removal mining uses explosives to blast off mountaintops and expose coal seams. The practice releases coal dust and silica into the air, and excess material is dumped into valleys, disrupting ecosystems and leaching chemicals into streams and groundwater.

Wells and streams near surface mines have tested positive for arsenic, sulfates, and other chemicals linked to health impacts including neurological problems, digestive issues, cancers, and increased infant mortality.

Peer-reviewed studies have shown that mountaintop removal mining increases the risk of cardiovascular disease, cancer, birth defects and other health conditions for people living near mine sites. Perhaps the most prolific researcher into these health risks is Environmental Health Professor Michael Hendryx, formerly of West Virginia University and now at Indiana University.

“I’ve become convinced over time, after we’ve done all these studies, that mountaintop removal is harmful to health, and we have evidence both from the health and the environmental side to support that statement,” Hendryx said.

In 2016, Walker and several of his nearby families sued Dynamic Energy, the company operating the mine they blame for their health problems. They lost that suit; lawyers for the families could not prove conclusively that pollutants in the stream and the wells were the result of the Dynamic Energy mine.

“I think the jury recognized that the DNA from the water leaving the mine permit is not the DNA in the water in these people’s wells,” said Billy Shelton, an attorney for Dynamic Energy and a personal lawyer to the company’s former owner, West Virginia Gov. Jim Justice.

Court documents from an appeals case allege jury tampering and witness intimidation may have played a role, but the West Virginia Supreme Court of Appeals upheld the lower court’s ruling.

Hendryx acknowledged it is difficult to prove that any given illness is directly caused by any given mine site. Still, he believes his research proves that pollutants found near mountaintop removal sites increase risk for a variety of diseases.

“Even after, over and above any effects that are due to smoking, or age, or insurance, or poverty, or education, and others, there’s an independent, significant effect of living in mining communities that contributes to poor health.”

Proponents of surface mining have cast doubt on his work, even going so far as to finance research that yielded opposing conclusions.

Human Rights Watch’s Saadoun argued in her report that industry interests played a role in suppressing attempts to clarify the science around health risks, and shifted the burden of dealing with those health risks onto vulnerable communities.

Saadoun found that the mining industry had a role in the 2017 repeal of the Stream Protection Rule, an Obama-era regulation that would have blocked surface mining within 100 feet of a stream.

“The coal industry spent millions of dollars lobbying legislators to oppose this rule and contributed generously to campaigns of several lawmakers who would ultimately vote to cancel it,” Saadoun wrote.

When Congress was considering the repeal, Saadoun said in an interview, lawmakers relied on industry-commissioned research that overestimated the economic cost the rule would have.

A brief letter from the Interior Department cited a budget review as the reason for the cancellation, but subsequent reporting showed that lobbying from industry groups may have played a larger role. The Ohio Valley ReSource filed public records requests for additional information about Interior’s decision, but received hundreds of heavily redacted pages of documents with little information.

But there may soon be more clarity.

Following the 2018 midterm Congressional election, Rep. Raúl Grijalva (D-AZ) will become chair of the House Committee on Natural Resources, which oversees the Interior Department. A spokesperson for the committee Democrats told the Ohio Valley ReSource that Grijalva intends to look into the cancellation of the Academy’s study when his party takes power, expanding Grijalva’s ability to investigate.

Jason Walker said his Crohn’s disease flare-ups quieted when he switched from well water to bottled, and he’s become accustomed to the challenges of pumping and treating his own water from the stream. He doesn’t want to leave the holler where he grew up, and where his father is buried. Even if he did want to leave, he also recognizes that he probably couldn’t: His property value tanked when the well dried up.

Walker maintains hope for a better resolution. “I just really want clean water,” he said.  “It’s not a whole lot to ask for, either. It’s really not.”