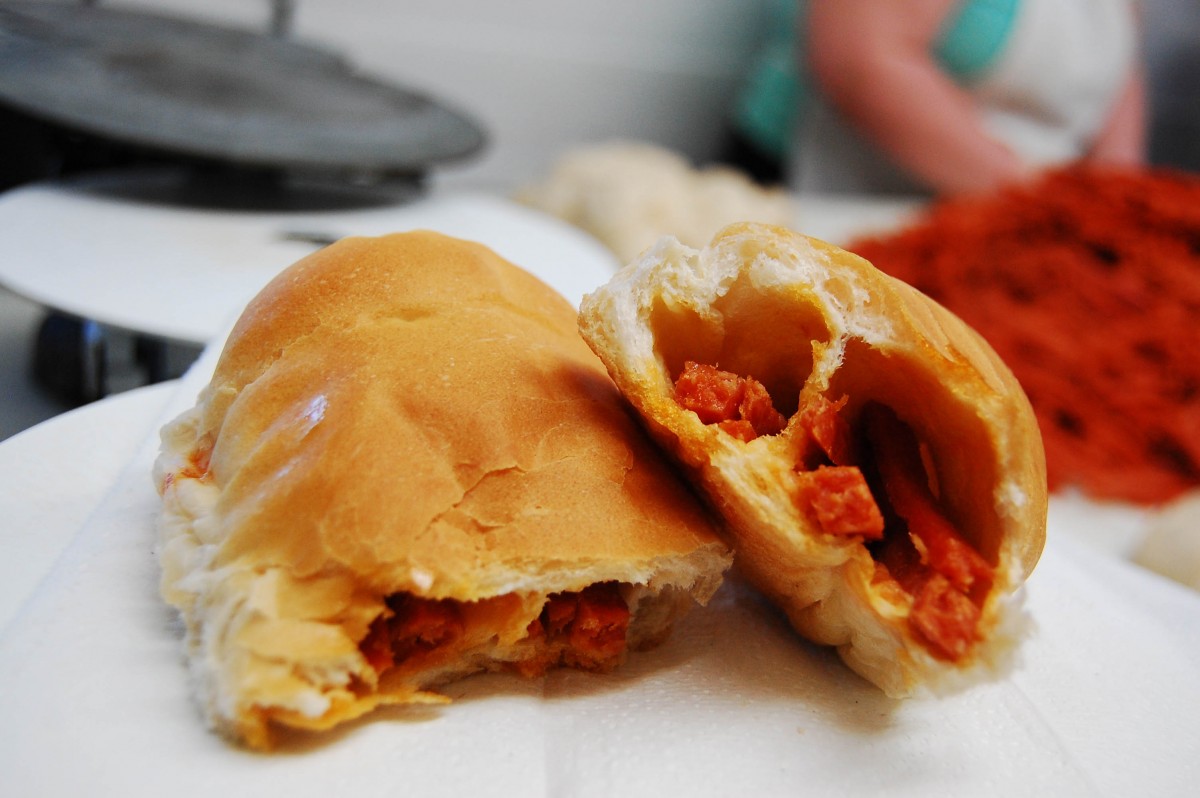 The pepperoni roll is one of the best known foods in West Virginia. Photo: Candace Nelson/100 Days in Appalachia

Food is part of our workplaces. Think about celebrating a coworker’s birthday with a freshly baked cake or journalists ordering piping hot pizza on election night or even office potlucks with homemade dishes during the holidays.

Each of these small moments in life are marked by the food we consume during them, as are many parts of our culture. But some foods are even more deeply intertwined with a place through its connections with the industry that supports it. In fact, in some cases, a food’s very existence is because of a specific industry, at least that’s true in Appalachia.

In this region, many workers found themselves in blue-collar jobs and that affected the types of food they could consume during the lunchtime hour. At dinner, options are limitless. You have the luxury of a stove and fresh water. You can bake fresh breads and simmer beans and keep dairy cool. But, lunch served a different purpose. It had to hold up to a hard day of work and fill a growling tummy.

Many had to ask themselves: what could go without refrigeration for 12 hours? What is portable and could be taken on the road? What could be filling and quick to eat?

A few foods were born from these restrictions, foods that continue to be heralded as some of the best in Appalachian culture. They were the result of fitting an industrialized lifestyle while also serving as a reminder for workers of their heritage and homes during the work day.

When Italians emigrated from Calabria, Italy, to North Central West Virginia to work in the coal mines, they brought traditional foods with them: fresh pastas, breads, cured meats and more. It was common to see pieces of bread and salami in lunch buckets underground in the late-1800 and early-1900s. 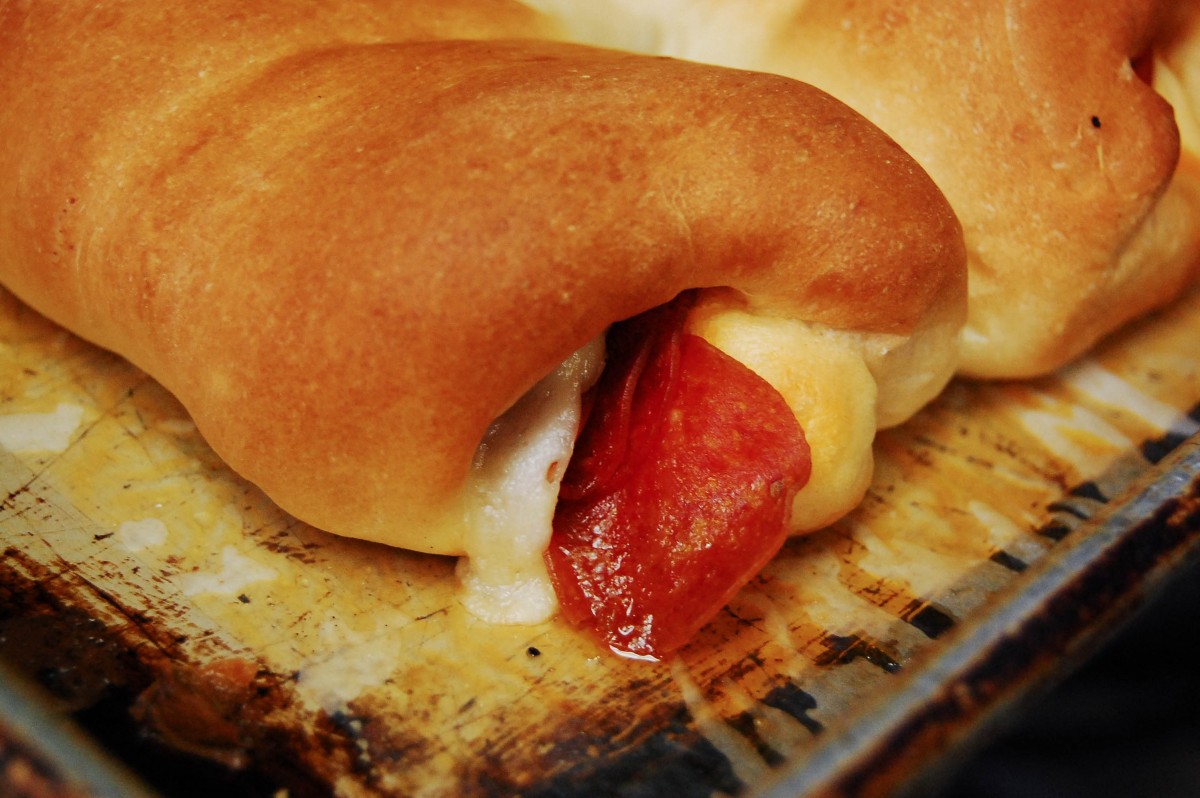 The pepperoni roll is served at any number of events in West Virginia today, from the football tailgate to the school cafeteria lunch. Photo: Candace Nelson/100 Days in Appalachia

Sometime in the 1920s, it’s likely that the wives of coal miners first began to tinker with what we now know as the pepperoni roll. It was sometime between 1927 and 1938 that Giueseppe Argiro, a former coal miner, baked bread rolls with sticks of pepperoni inside them for commercial purposes. That’s when the pepperoni roll was presented to a large audience.

The pepperoni roll transformed lunch for miners. It became a portable, shelf-stable snack that allowed them to eat with one hand and drink water with the other before rushing back to finish their long shift.

But the pepperoni roll has become more than just a symbol of the history of this community largely because it is a culinary gem in its own right. When the freshly cut pepperoni bakes inside the dough, the oils and herbs and spice seep into the bread, creating a flavorful, hearty snack. Italians – as well as other communities – enjoyed the pepperoni roll as a treat.

Many of the reasons for its success in the coal mines continue to persist today. Its ability to be shelf-stable and portable make it perfect for tailgating, road trips and even in today’s school cafeteria lunches.

Variations of the pepperoni roll have developed over the past nearly 100 years. First, by using slice pepperoni that is wrapped throughout the whole roll and then integrating cheese – often mozzarella, provolone or pepper jack. Recent iterations have included sauce, jalapenos, used ground pepperoni or have even been deep-fried.

The pepperoni roll lives on in Mountain State bakeries, restaurants and gas stations. Though most people will still say the best ones are from their grandmothers’ kitchens.

The famous Primanti Brothers sandwich, created in the Paris of Appalachia, fed workers of a different industry: steel. 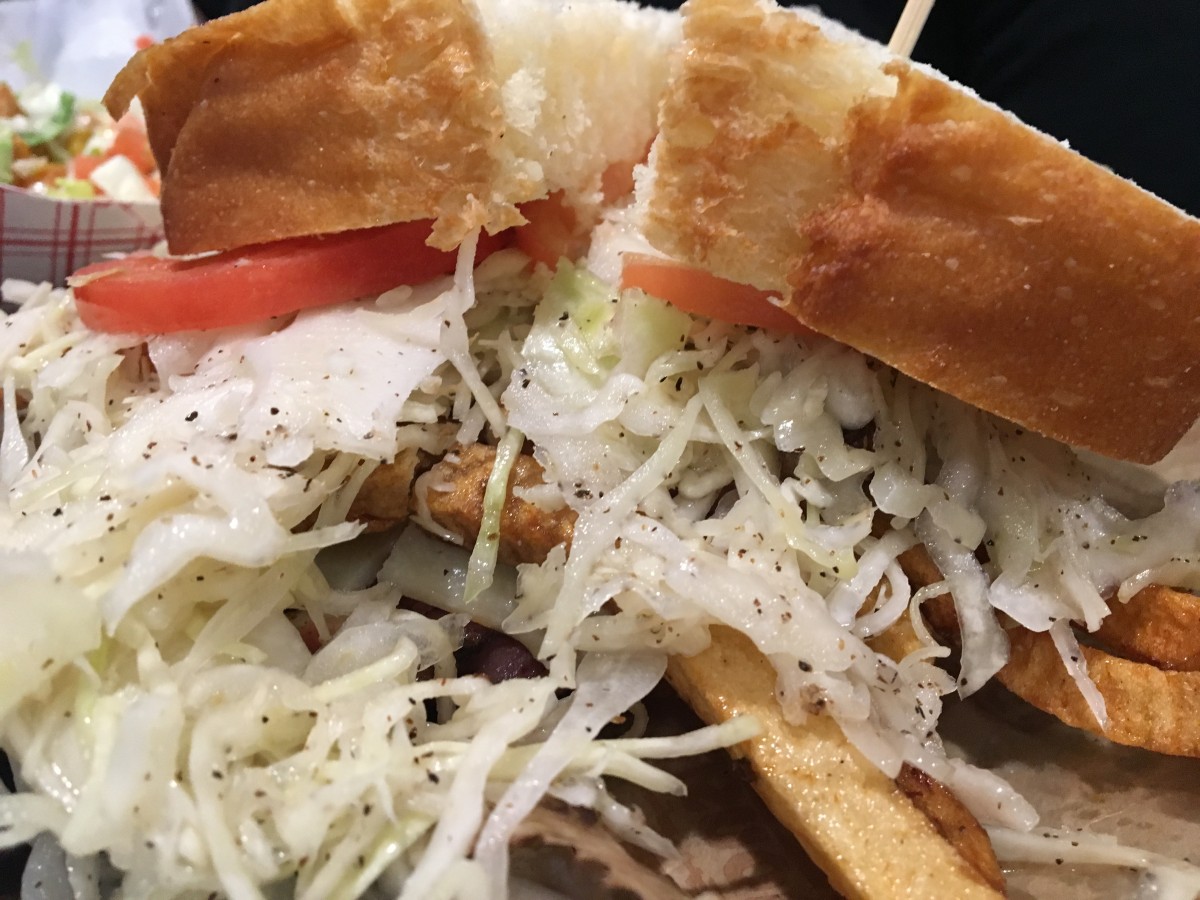 The Primanti Brothers’ sandwich was piled with French fried and coleslaw for a quick, hardy meal. Photo: Candace Nelson

Local legend claims that the sandwich, which is piled with French fries and coleslaw on the inside, was created for steel mill workers dating back to the 1930s at the Pittsburgh restaurant. It allowed for rushed steelworkers to quickly eat their entire lunch – sides and all – in one go, according to food magazine Saveur. The towering sandwich includes a meat, provolone cheese, thick-cut French fries and vinegar-based coleslaw all stacked between two slices of Italian bread.

And while the details are murky (with others claiming it was created for truck drivers), the lore of this American sandwich is widely known and celebrated. Unlike the pepperoni roll which has largely remained a West Virginia delicacy, you can eat a Primanti Brothers sandwich with fries and coleslaw everywhere from Pennsylvania to Florida and dozens of restaurants in between – and when doing so, you are consuming part of the history of the city.

Both the pepperoni roll and the Pittsburgh sandwich share a common concept: food made by and for immigrants. The story of Appalachia is a story of immigration and diversity and that is reflected in the foods they ate, but also in the containers constructed to allow the people here to eat them.

As more Americans began shifting to industrial work in factories and mines, it no longer became feasible for the average man to return home for a hot lunch. Rather, he needed something to transport and protect those pepperoni rolls and Pittsburgh sandwiches.

Since the 19th century, workers carried their lunches in heavy-duty tin or aluminum pails that could weather the rough atmospheres workers endured, according to the Smithsonian Magazine. In fact, it was a miner who created the aluminum variant after he accidentally crushed his tin lunch pail, according to Sudbury Mining Solutions Journal. 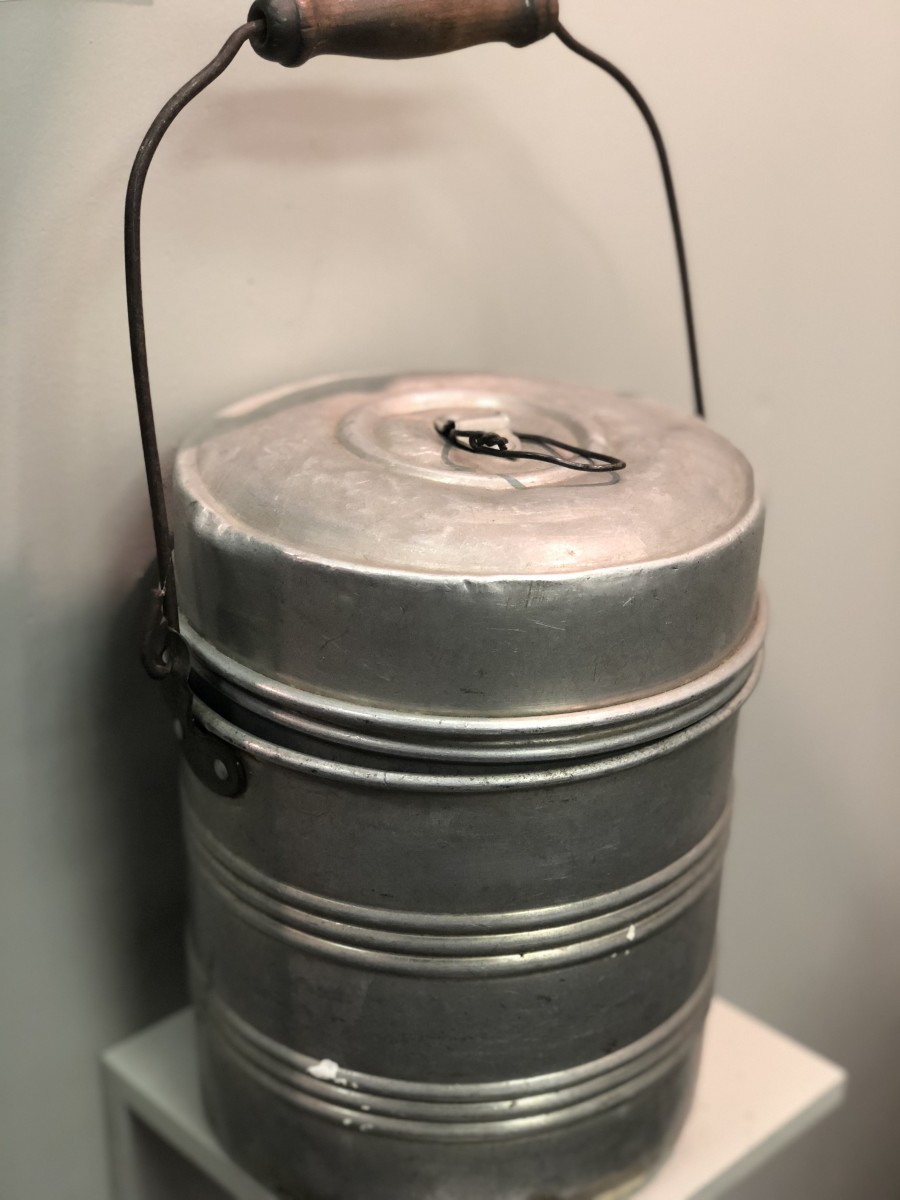 Aluminum lunch pails, like the one pictured here, were used to protect workers’ lunches in rough environments. Photo: Candace Nelson

The pails themselves were signifiers of class; the wealthy could afford the luxury of time to return home mid-day or wealth to purchase food elsewhere, while those on the lower end of the pay scale could not.

Later came the Thermos, a durable beverage container that kept hot beverages hot and cold beverages cold until lunchtime. These two products together enabled workers to maintain a piece of their culinary culture while putting in long hours away from home. It kept the foods they cherished safe in an otherwise dangerous workplace, and that was almost as important as the foods themselves.

Food plays an important role in Appalachian culture, and by extension, how we earn a living. America knows beans & cornbread, wild game, ramps, buckwheat and many more are traditional Appalachian foods, but there is something unique about the foods Appalachian workers chose to get them through a long day, and those foods born from this lifestyle.

Pepperoni rolls and Primanti Brothers sandwiches are just two examples of how creative Appalachians were able to transform comfort foods into lunch staples that reflected their culture and heritage, but this concept translates to a larger scale and tells us more about Appalachian identity.

As people immigrated to the region in search of work, the foods, the customs, the arts and the values they brought with them came together to help create Appalachia’s identity, much of which is centered around the concept of hard work.

These immigrants left their home countries in search of a job, and they found it in the form of difficult, physical labor. These jobs were often so demanding that the only breaks the workers had during the day were those lunches – and even then, they did their best to make it a very quick one with the invention of these portable, easy meals.

The people of the region have made difficult terrain work for farming and adapted their cultural dishes to accommodate foods available in the region. They have used parts of animals that would have historically been thrown away as rubbish. They have transformed goods from simple ingredients to full-fledged meals with minimal budgets.

Appalachians are industrious and resilient. They are down-to-earth, creative and resourceful. They are steadfast, hardy and determined – in all aspects of life. They are innovative and always willing to take on a challenge.

It is only fitting those qualities are reflected in the food they consume. Pepperoni rolls and Primanti Brothers sandwiches are not merely foods created for Appalachians; they embody what it means to be an Appalachian.

Candace Nelson is a marketing professional living in Charleston, W.Va. She is the author of the book “The West Virginia Pepperoni Roll” from WVU Press. In her free time, Nelson blogs about Appalachian food culture at CandaceLately.com. Find her on Twitter at @Candace07 or email [email protected]