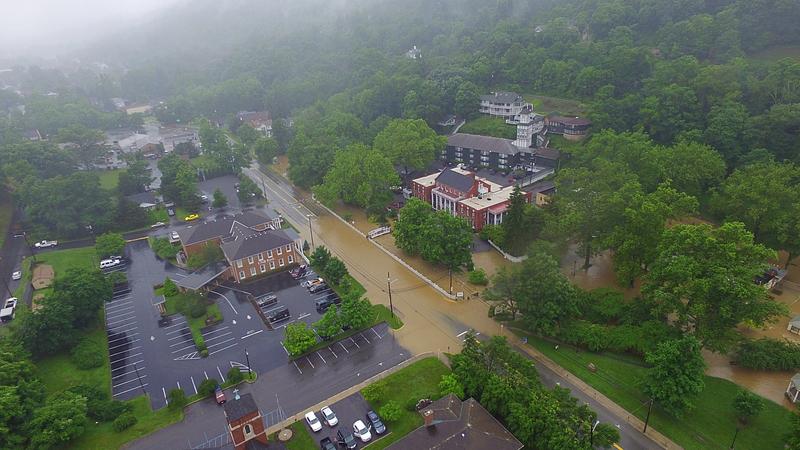 Last week, the Intergovernmental Panel on Climate Change, or IPCC, the U.N. body that provides objective, scientific reports on climate change issued a grave warning: Humans are running out of time if we are to prevent the worst impacts of global warming.

While the report took a global view, here in the Mountain State, scientists can already document the impacts of climate change. Many parts of the world are bracing for more extremes including and higher temperatures and more severe droughts, while the prognosis in West Virginia is more of a mixed bag.

While some aspects of West Virginia’s economy may benefit from the milder winters as a result of a changing climate – including agriculture and some outdoor recreation industries – expected increases in rainfall could pose challenges to human-constructed infrastructure.

“The flooding that happened two summers ago in 2016 was truly severe and that could be something that we see more often,” Kutta said.

West Virginia is one of the most flash-flood prone states in the country, and maybe even the world. The stacked ridgelines of the Appalachian Mountains and deep hollows are really good at shaking moisture out of storms, and channelling it quickly downstream to larger rivers.

He added that more research and planning is needed to tap into the opportunities that could be wrought from climate change as well as challenges.

When it comes to West Virginia agriculture, climate change has mixed implications.

Unlike in places like California, where climate models predict warmer, drier conditions, in Appalachia, milder conditions could result in a longer growing season that could support a more diverse variety of crops, Kutta said.

“That reduces sunlight available for crop growth,” he said.

In fact, the impacts of a wetter West Virginia are already being observed across the state’s forests. Scientists see changes in the types of tree species putting down roots in West Virginia. Oaks are being replaced by maples, which prefer shadier and wetter conditions.

“Maples are more vulnerable to droughts, but the increasing number of maple trees in the state indicates that droughts are becoming less severe and water resources are becoming more abundant,” he said.

The IPCC report stresses that to prevent 2.7 degrees of warming, greenhouse gas pollution must drop significantly. Burning coal for electricity, which is the most carbon-intensive source of fuel, would have to decrease from almost 40 percent today to between one and seven percent by 2050.

That could greatly impact West Virginia, which is the second largest producer of coal in the United States and in 2017 sourced 93 percent of its own electricity from coal-fired power plants, according to the U.S. Energy Information Administration.

The state could also play a significant role in mitigating climate change, according to Kutta.

“The ongoing transition away from coal has been difficult, but West Virginia is rich in other natural resources that could represent a boon for the state’s economy,” he said. “The Marcellus and Utica Shale formations represent sources of natural gas, a cleaner fossil fuel that may ease the crucially needed transition to renewable energies.”

Furthermore, the rugged terrain of the Mountain State offers many opportunities for renewable energy.

The ridges of the Allegheny Mountains could be prime wind turbine real estate. Abundant water resources could support hydroelectric generation and Kutta said West Virginia is even rich in geothermal energy.

“It’s actually from all of the wells that have been drilled in the state,” he said. “They’ve found temperatures in excess of 150 degrees Celsius just a couple of kilometers below the surface, which would be suitable for commercial scale energy production if the funds are available.”

Overall, the new IPCC report paints a rather grim picture. The scientists who put it together looked at more than 6,000 published studies and found that over the next two decades the planet is on track to see global temperatures rise nearly 3 degrees above where they were prior to the industrial revolution.

The authors note the impacts of continued warming include food shortages, wildfires, severe droughts. Coral reefs will experience mass die-offs and millions of people living on the coasts will need to relocate.

The report estimates the cost of not preventing global temperatures from rising above 2.7 degrees will cost some $54 trillion in damages.

The authors also note that doesn’t have to be our future, but the world needs to act fast to prevent it from happening. Kutta agrees.

“It’s a problem that is bigger than each individual, so we need to be working together as a group to solve this truly enormous challenge,” he said.