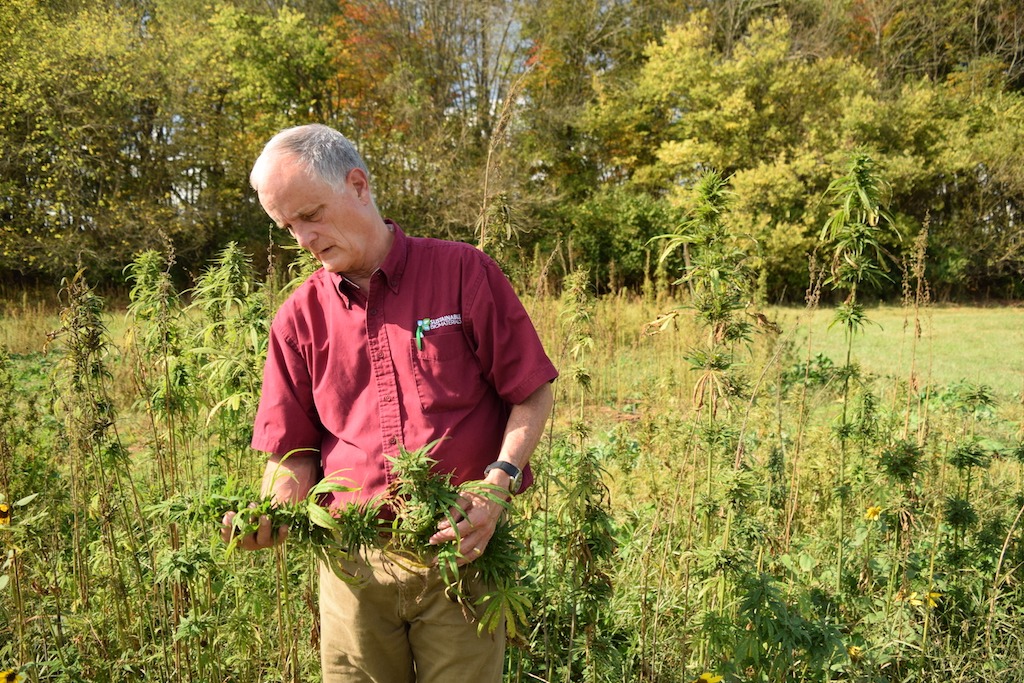 On the cusp of an election cycle, Virginia’s trajectory toward further decriminalizing cannabis seems imminent. And yet, the state’s laws against marijuana use and possession remain some of the nation’s most draconian.

In Virginia, misdemeanor possession of less than half an ounce of cannabis includes up to 30 days of jail time, coupled with a potential $500 fine.

Jenn Michelle Pedini, executive director of the Virginia chapter of the National Organization for the Reform of Marijuana Laws (NORML), refers to an impending age of “fines not crimes.” In nearby Delaware, a newly proposed and ultimately rejected piece of legislation would have allowed for recreational marijuana use with a simple fine for public consumption. That proposal is much like the one Pedini envisions for Virginia. 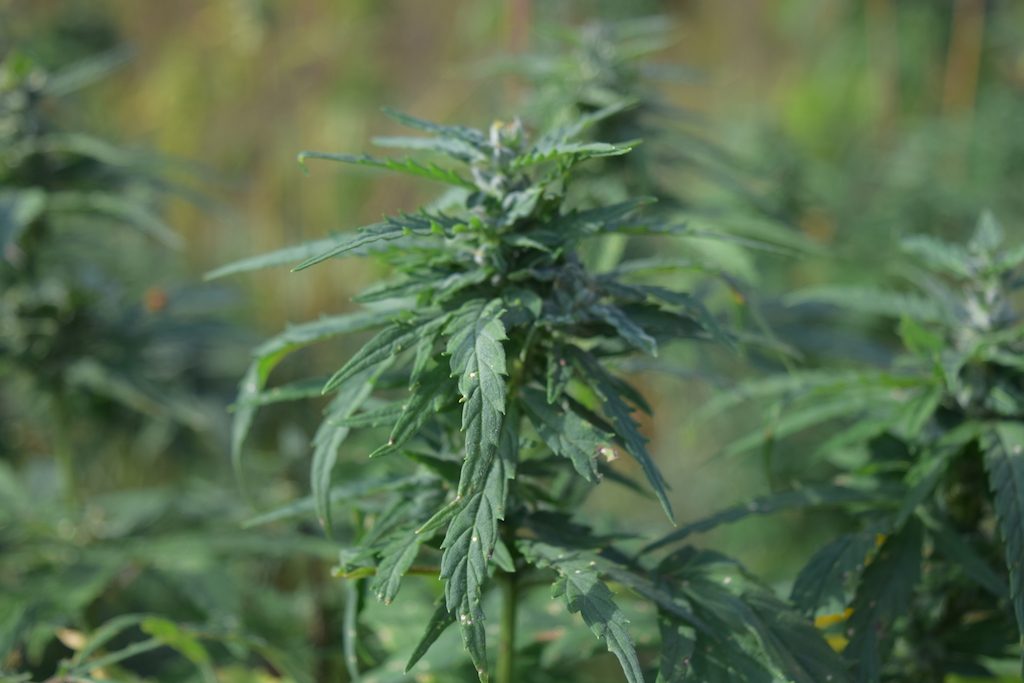 Hemp has been grown in the commonwealth since the area was colonized, but currently hemp is a highly regulated plant that can only be grown in association with a research initiative.

What appears to be a highly anticipated shift in state-level public policy during the next election cycle is not merely a demographic change from older, perhaps more morally squeamish voters to younger ones with more laissez faire and socially liberal viewpoints, but also the product of years of advocacy groups’ efforts in building relationships with elected officials.

“We do direct lobbying and have a very fact-based approach when we talk to legislators,” Pedini said in a recent telephone interview. “Politicians can see how they are impacting the lives of all Virginians and understand that marijuana policy reform is every person’s concern.”

The Virginia chapter of NORML has lobbied hard to alleviate restrictions on the use and possession of marijuana, but their efforts have been tightly focused on medicinal applications.

Their efforts have paid off. In June of this year, Senate Bill 1027 sponsored by Senator David Marsden (D-Fairfax) was signed into law by Gov. Terry McAuliffe, making Virginia a medicinal marijuana state by “legalizing the manufacture and use of cannabidiol oil and THC-A oil for intractable epilepsy.” The legislation called for the creation of five dispensaries throughout the state.

The centers, called pharmaceutical processors, will grow, cure, and trim plants on-site. All the processing, distillation and synthesis of custom biopharmaceutical medicines to make the oil will be done in an on-site laboratory, and the pharmacies will only dispense this oil, not raw plant material.

The number of dispensaries was decided with Appalachia in mind, said Pedini.

“It really was an Appalachian-focused strategy. When we wrote this regulatory program we knew we had to service low-income families that live three and four hours out in the mountains,” Pedini said.

Decriminalization for medicinal usage seems to be working as a strategy. In some ways, it complements efforts to combat the opioid crisis in Southwestern Virginia; a 2017 study conducted by the University of California, San Diego found hospitalizations due to opioid painkiller dependence fell 23 percent in states where medical marijuana was legalized. 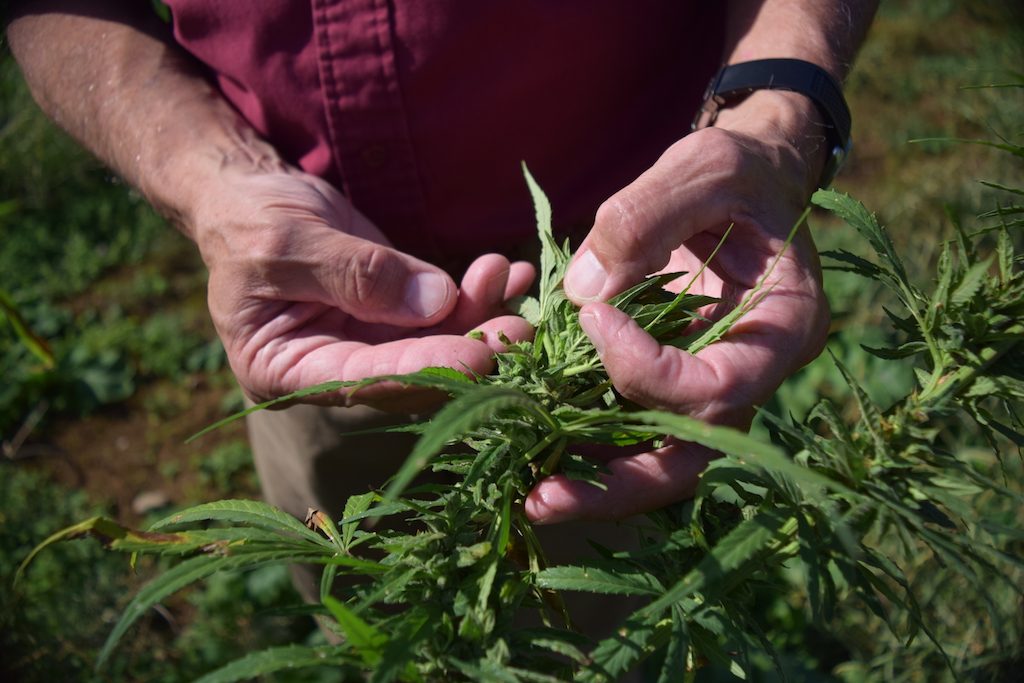 Tom Hammett, professor of sustainable biomaterials at Virginia Tech, holds a hemp plant and some hemp seeds. Seeds from hemp are known to have antioxidant properties and can be dried and sold as a health food product. Hemp seeds are just one of the 25,000 products that can be manufactured from the plant.

What does the possibility of decriminalization have to do with boosting the economy in Appalachia?

The answer is complicated.

While legalized marijuana farming could be an enterprising industry for a region with abundant agricultural resources, plants containing the psychoactive ingredient tetrahydrocannabinol will not become legal to cultivate or market any time soon in the commonwealth.

But marijuana and its cousin hemp are both lucrative crops, the potential wealth of which could help shift the power paradigm of urban wealth and rural poverty.

Soybeans are currently Virginia’s number one cash crop–in 2016 the state exported $870 million worth of soybeans and soybean meal to international markets. In comparison, the Hemp Industries Association estimates the total retail value of hemp products sold in the U.S. in 2015 to be at least $573 million.

In 2015, the United States imported $78.2 million of hemp, a significant rise compared to the 2005 total of $5.6 million. Because its production is so strictly regulated, this means that any state with access to a slice of the agricultural market for hemp has potential to carve out a significant niche in the domestic supply chain.

The plant’s close ties to agriculture were recognized in 2014 when the Obama administration incorporated a small section into the Farm Bill called “Legitimacy of Industrial Hemp Research,” essentially acknowledging the difference between hemp and marijuana and allowing research institutions to legally cultivate the plant. 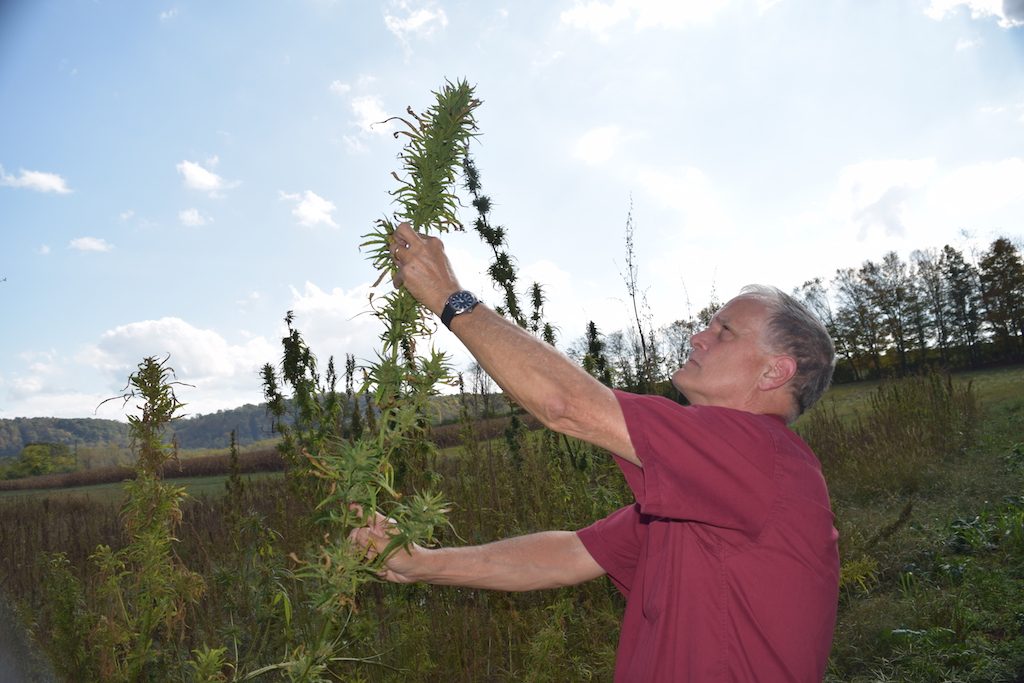 Farmers in Virginia can only legally grow hemp in conjunction with a state-mandated research program. While hemp remains stigmatized by its close cousin marijuana, hemp grows taller, and is more fibrous than its THC-laden relative. Here Tom Hammett, professor of sustainable biomaterials at Virginia Tech, holds a hemp plant at Kentland Farm where the university has research plots.

Tom Hammett is a professor of sustainable biomaterials at Virginia Tech and a proponent of cultivating hemp as an ideal replacement for crops such as tobacco in Southwestern Virginia. The university is studying best production practices at its research plots at Kentland Farm. Hammett, who has studied the crop globally, sees a bright future for hemp’s cultivation in Virginia.

“Farmers have to have diversified crop systems to be financially viable, because you can never predict when a pest might decimate one of your staple crops,” he said. “That can wipe out a farmer’s income.”

The most important differences between hemp and marijuana, at least to lawmakers, is that at .3 percent industrial hemp is a poor conductor of the psychoactive substance found in marijuana, THC. Hemp is also more fibrous than its cousin, and grows much taller.

It is currently illegal to grow hemp or possess any materials related to hemp production not under the auspices of a research program, and while several exist throughout the state, participating in these programs requires an extensive background check. Growers must obtain a license through the Virginia Department of Agriculture and Consumer Services. It is also illegal to buy hemp seeds as an individual on the open market.

In nearby West Virginia, the plausibility of hemp bolstering a sputtering coal industry is chugging much further towards reality. Enterprising legislators have been able to further define vague aspects of the Farm Bill regarding third parties who fall outside of research relationships with institutions of higher education, where individuals are allowed to apply for licenses to grow hemp.

“There’s a million things you can do with this crop,” said Morgan Leach, chief executive officer of the West Virginia Farmers Cooperative, and business partner in a company who is researching ways to make battery anodes out of hemp. ”Our goal is to find, identify, evaluate, and develop infrastructure for cash crops.”

While the value of exploiting hemp as a cash crop is tantalizing in Southwest Virginia and its nearby environs, the benefits of diversifying economies stuck in financial doldrums are priceless.

“The key is grabbing a piece of the global market,” said Jason Amatucci, founder and director of the Virginia Industrial Hemp Coalition.

According to Amatucci, Southwest Virginia is a hot spot for growing the crop that could spur a multi-billion dollar industry, not nationally, but in the region alone.

“Hemp is so valuable. It’s a superior fiber and protein in every way,” said Amatucci. “It’s not a plant to be feared.”

Note: All photos were taken by Amy Loeffler.

Amy Loeffler (@gastropublica) has been writing about food and agriculture in Virginia since 2009 when she worked as an intern and reporter for Northern Virginia Magazine’s food desk. She was recognized by the prestigious Greenbrier Symposium for Professional Food Writers in 2010 with honorable mention for a story about Best Buddies, a nonprofit organization that fosters friendships and leadership opportunities for adults with developmental disabilities. Her stories have also aired on WMRA the Harrisonburg, Virginia NPR affiliate.