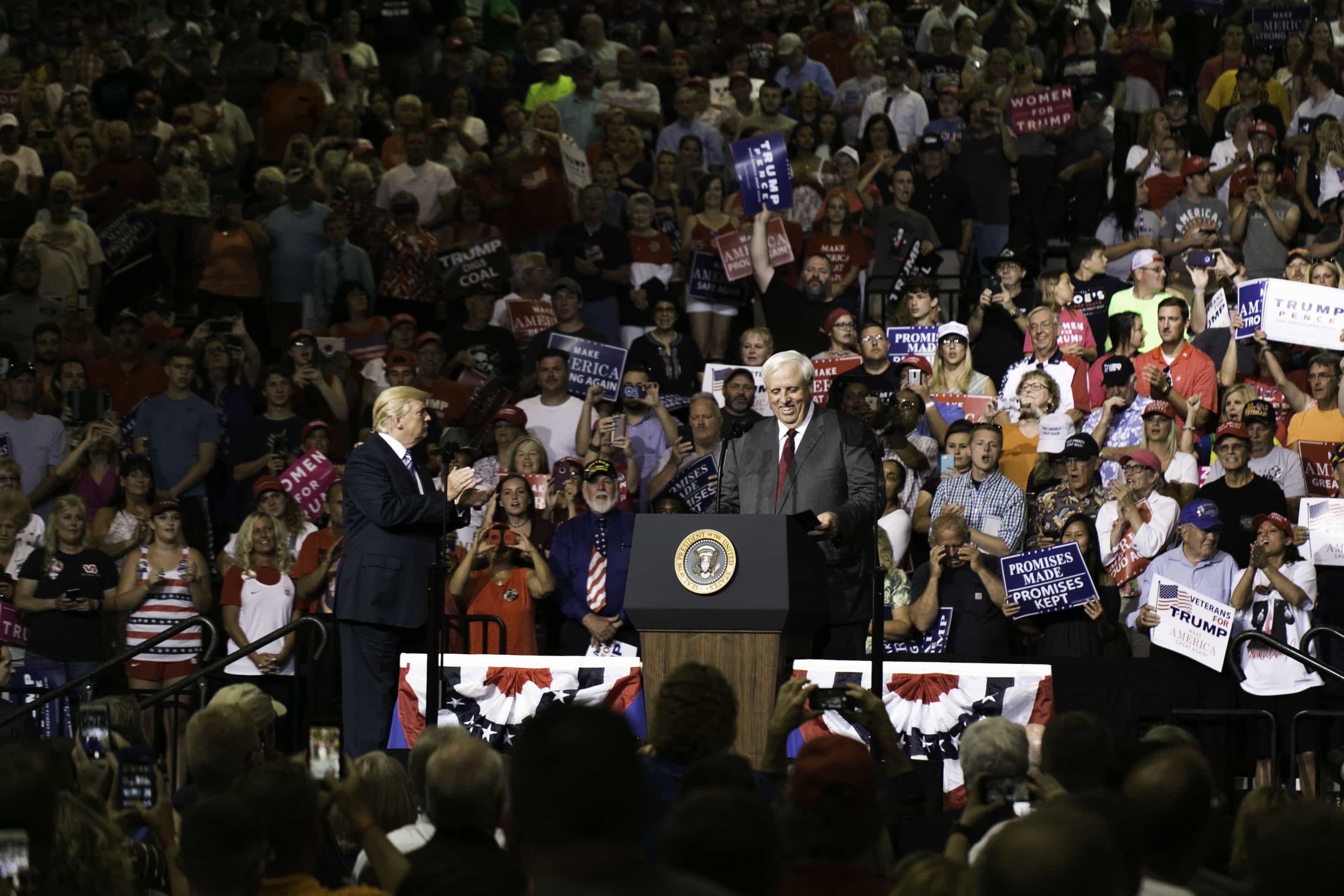 Last year, Jim Justice defied the odds for a Democrat in West Virginia, defeating a Republican by 7 percentage points to become governor even as Donald Trump carried the state by 42 points among the same set of voters in the general election..

On Thursday, Justice defied expectations by dramatically switching political parties to become a Republican in conjunction with a Trump rally in Huntington. The switch isn’t all that unprecedented for Justice: He has switched party affiliation more than once, with the most recent being a shift on February 27, 2015, from Republican to Democrat.

Justice also has given money to both Democrats and Republicans, including to two western Virginia Republicans congressmen in 2016 — when he was running as a Democrat for governor.

Justice has long praised Trump — including, again, during the 2016 campaign — and bragged about his close relationship with the president. Earlier this year, he hunted turkey and fished for trout in Monroe and Greenbrier counties with Donald Trump Jr.

More importantly for West Virginia Republicans, Justice also split from state Democrats to collaborate with Senate Republicans on a proposal to phase out the income tax — a plan that ultimately failed, but which perhaps helped lay the groundwork for Thursday’s announcement.

Tim Armstead, Republican speaker of the state House of Delegates, said that Justice’s party switch is evidence of the West Virginia Republican Party’s resurgence over the last few years.

“I’m glad the governor has recognized that the bold, conservative principles of the Republican Party best represent the people of West Virginia and provide the best path forward to improve our state,” Armstead said. “The people of this state want change, and we welcome all West Virginians to the Republican ranks. The majority of the legislature was elected on a platform of strong, Republican principles, and we hope the governor embraces these principles as he joins our party.”

Former U.S. Attorney Booth Goodwin, who unsuccessfully ran against Justice in a three-way race for the Democratic nomination for governor last year, wrote in an email:

“Jim Justice switching parties is totally unsurprising. I am surprised it took him this long to switch back. He’s always done only what he thinks is best for him—to heck with everybody else. It’s why I could not endorse him. This should be a huge wakeup call for the current leadership of the West Virginia Democratic Party. Character and integrity matter.”

“Jim Justice said he became a Democrat because Democrats care about people,” Biafore wrote in a statement.

“I think we can all guess just who he cares about by his decision today and it’s not the people of West Virginia … Jim Justice took advantage of Democrats by taking our money and our votes. It’s a slap in the face to all of us who believed in what he was promising. I never thought I would see Jim Justice be anyone’s puppet. Shame on him,” Biafore added.

The New York Times broke the news of Justice’s impending party switch on Thursday afternoon, indicating it was the “very big announcement” that Trump had promised reporters at the White House earlier in the day.

Little more on JUSTICE front: this has been in play for a bit. Trump discussed w the WV delegation when he spoke to boy scouts there last wk

The party shift apparently came as news to Justice’s staff.

Per a Dem official, @WVGovernor Jim Justice didn’t notify his staff that he would be switching parties at Trump’s rally tonight.

However, many longtime observers seemed unsurprised, either because of long-term political trends or Justice’s past history.

Interesting. But not a huge deal. WVa has realigned in federal races. Only a matter of time before it realigns in non-federal politics. https://t.co/faC3E8a75a

<— not shocked face that Jim justice is changing his political affiliation. Would not be shocked if he changed back. Kinda his thing.

According to a story by Phil Kabler at the Charleston Gazette-Mail, U.S. Sen. Joe Manchin, who endorsed Justice in last year’s race, declined comment, and Nick Casey, Justice’s chief of staff and a former state Democratic Party chairman responded to news of the New York Times story by saying, “I thought they were fake news?”

Manchin’s campaign for U.S. Senate in 2018 released a statement Thursday, stating that he was “disappointed” in Justice’s decision, but said he would work with him.

“I have been and always will be a proud West Virginia Democrat. I am disappointed by Governor Justice’s decision to switch parties. While I do not agree with his decision, I have always said that I will work with anyone, no matter their political affiliation, to do what is best for the people of West Virginia,” said Manchin.

“The Republican Party represents the future of West Virginia. Today, Governor Justice joins me and other Republican leaders in Congress and at the state level who stand for policies that will improve the lives of West Virginians. As the lead Republican in West Virginia, I stand ready to work with him to grow the economy, fight for energy jobs, and create a stronger West Virginia,” she said.

Sarah Jones, a staff writer at the New Republic who is from Appalachia, described the Justice switch as “the opposite of a shock” and said the Democratic Party is partly to blame for its failure to build infrastructure in rural areas and for allowing Justice to win the nomination in lieu of a less conservative candidate.

Reaction at Trump’s rally was mixed. Trump made a joke at the size of the 6-foot, 7-inch Justice, and at one point the crowd booed the governor.

He got a friendlier reception from U.S. Rep. Evan Jenkins, another former Democrat who switched to Republican and now is running in a GOP primary for the chance to face Manchin next year.

“If Jim Justice is the next to change his party registration to Republican, I welcome him to the Republican party,” Jenkins told the New York Times.