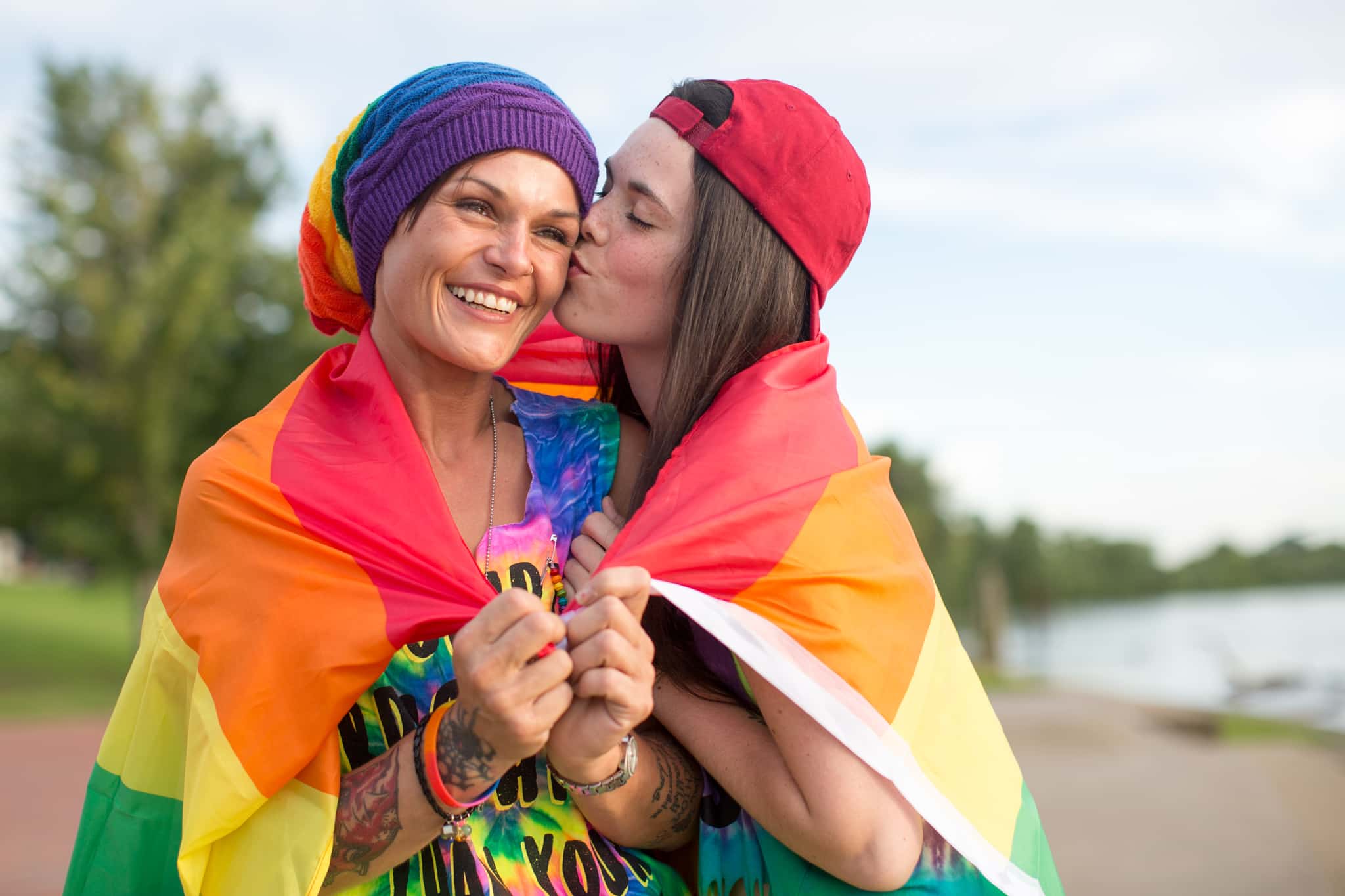 The weekend of July 29, 2017 brought the first gay, lesbian, bisexual, transgender and queer festival to Wheeling, West Virginia with several hundred attending the Ohio Valley Pride. We talked to some of the attendees about why they came to the event: 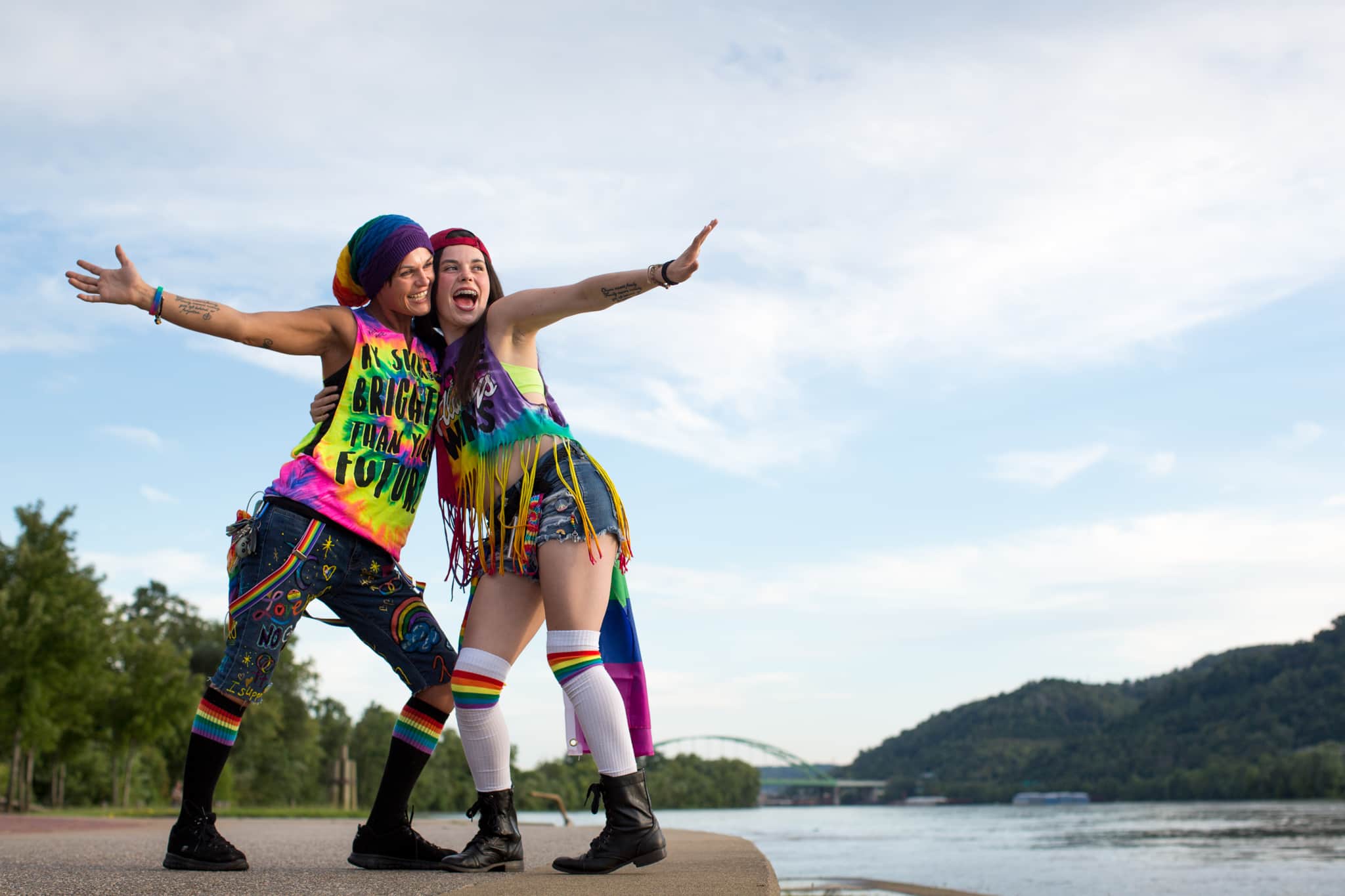 “Today, I was around people like me. I could be me.” – Andrea Potter

The family lives in Moundsville, West Virginia.  “We struggle,” she said of the entire family’s acceptance, “that’s why I think I am so proud of her.” 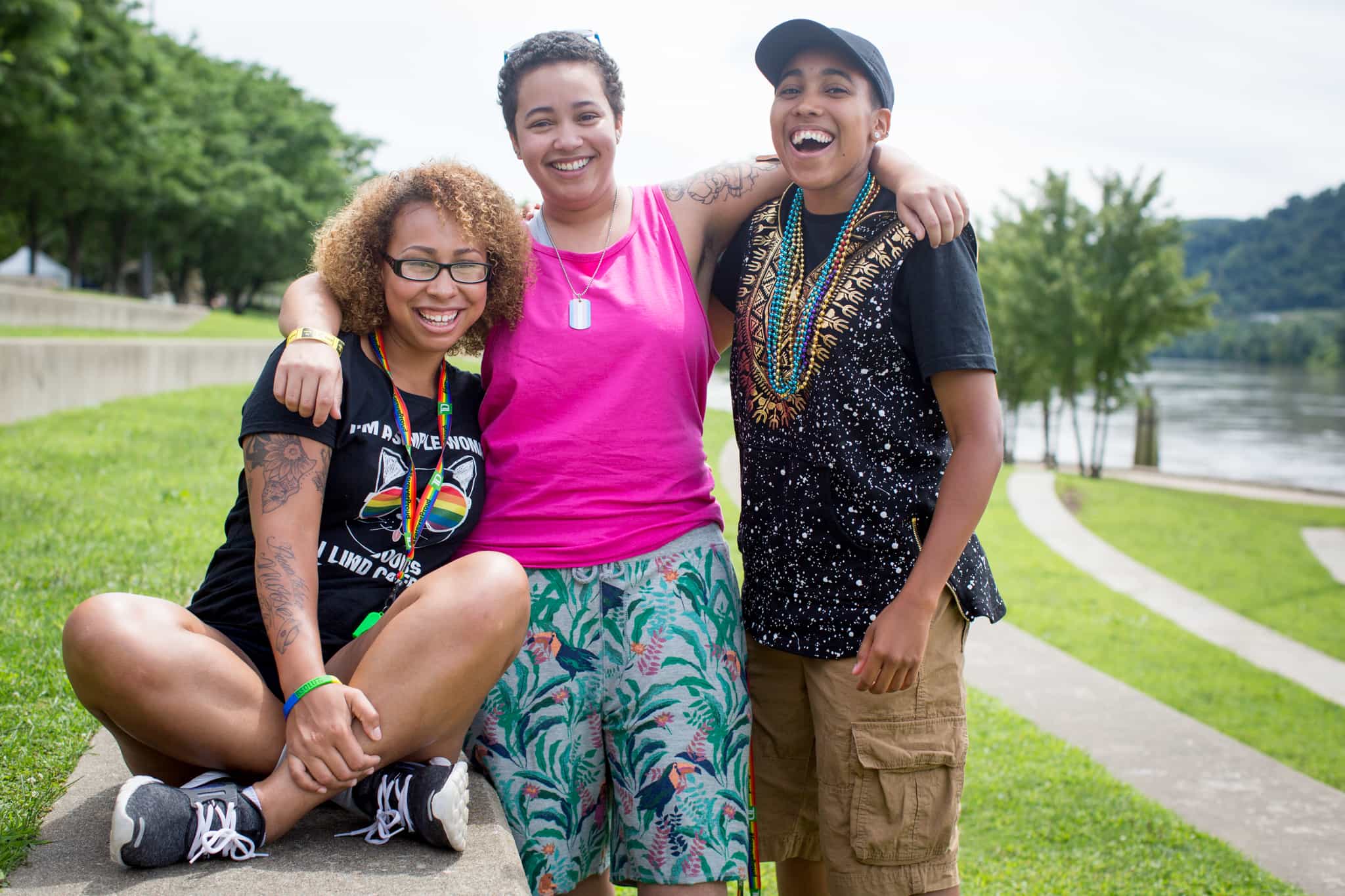 “No body wants to live in the closet and I think that they shouldn’t have to.” – Melinda Tober

“I’ve been out and proud since 2010,” said Tober. “It’s always looked down upon — so hush, hush, “ she said, explaining that she believes the event such as this help to increase awareness and reduce hate crimes. 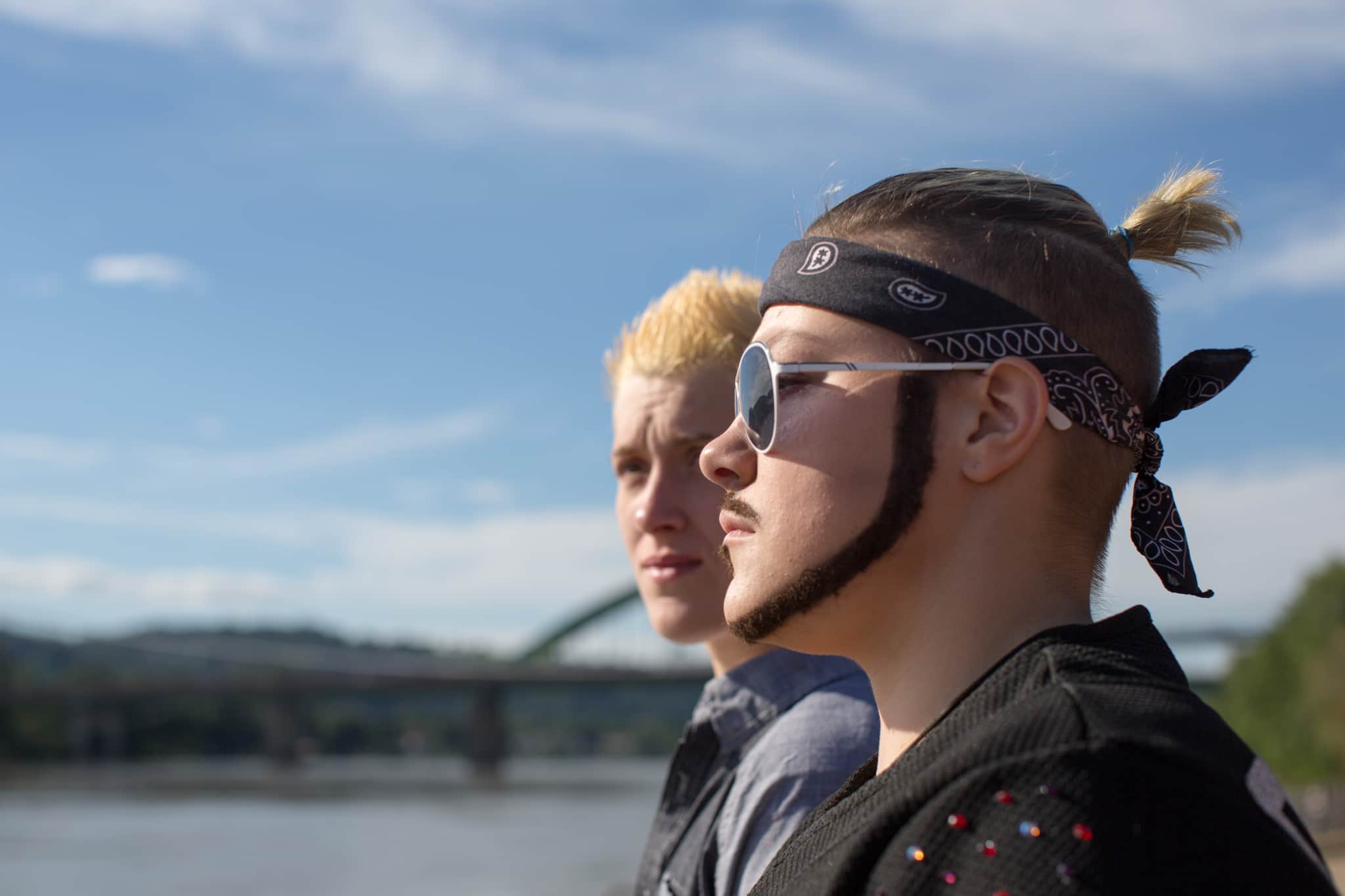 Hailee Parker, lives in Williamstown, West Virginia and grew up in Wheeling. She came to the event with her sister, Brittin Orum who lives in Wheeling. Parker performs as “Donte Dickles”.

“To be part of it. To walk around the streets in drag and part of the first pride – to just be home for the first time in a long time, “ Parker said. “This is my home. We both grew up here… I feel we have come very far. There are still nicks in the road, and it’s not the end of us fighting for equality… It upsetting to meet a person who is not supportive. All you can do is hold your head high and just leave it at that – with respect… Be yourself, love yourself. Hold your head high and forget what other people think of you.” 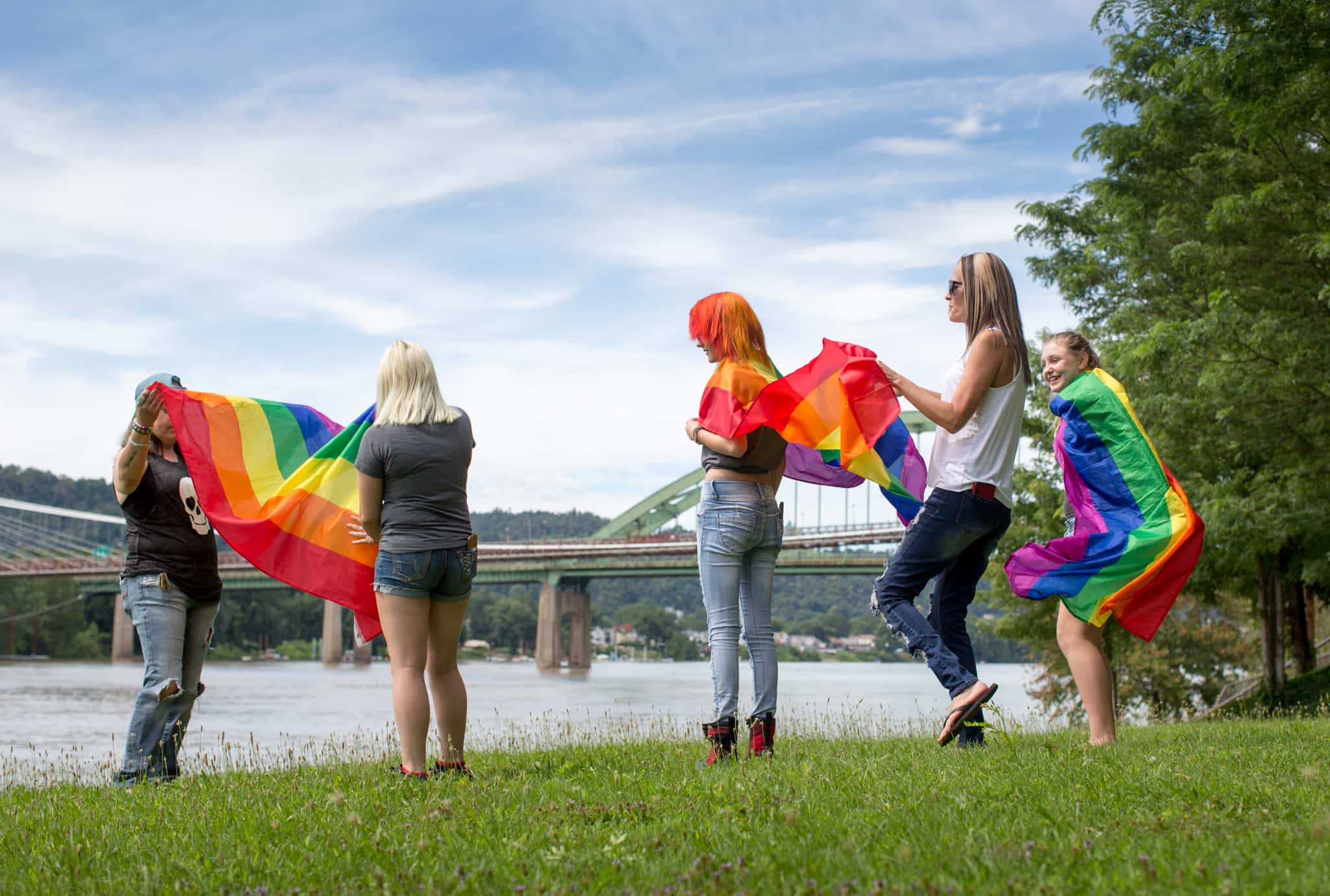 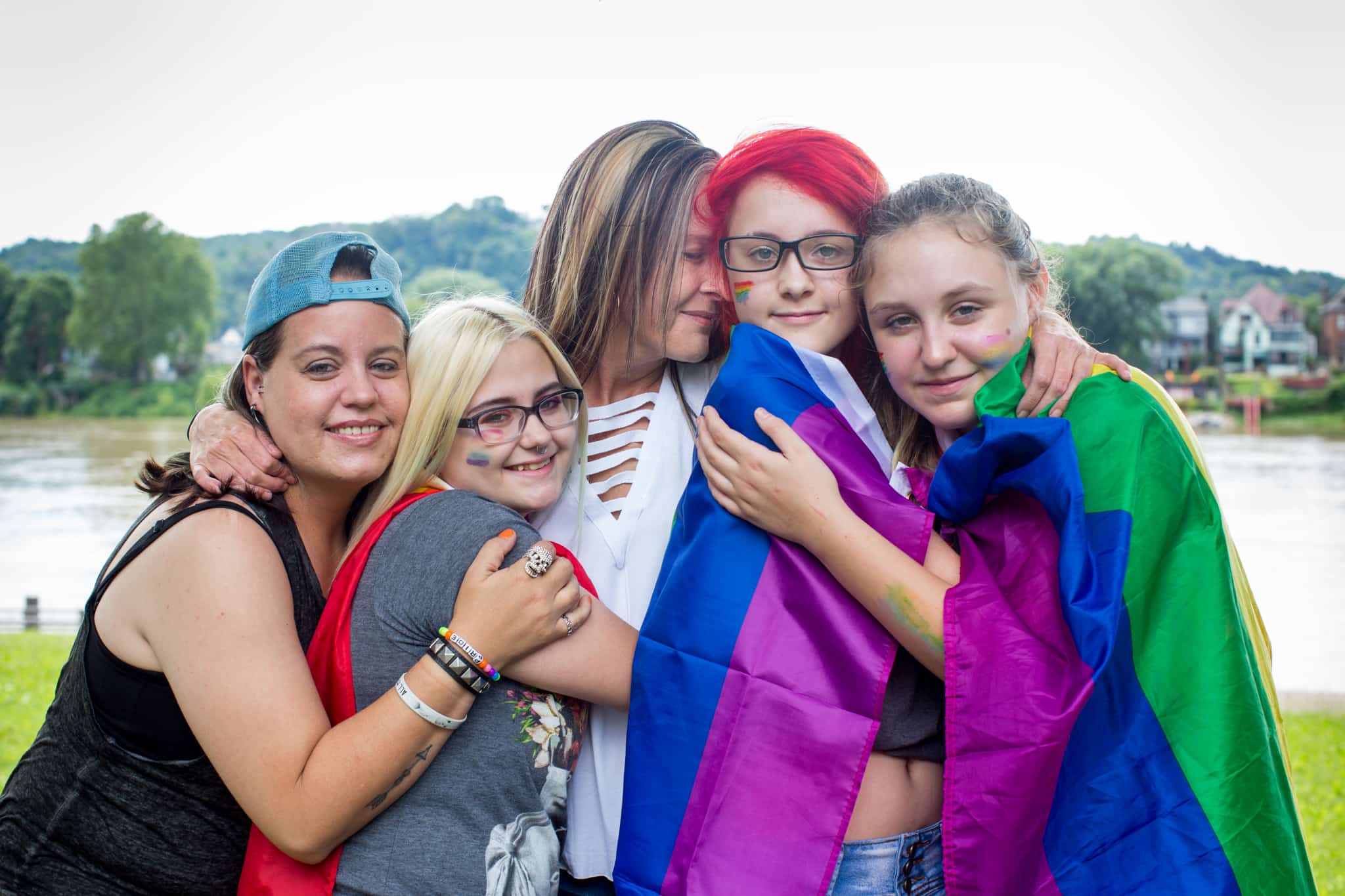 “Some people don’t understand that we all have to be equal so the world can be at peace.” – Regan Laquaglia

“We care about people and we know that no matter what that person thinks about us – underneath all their hatefulness there could be a good person. ” – Ava Thompson. 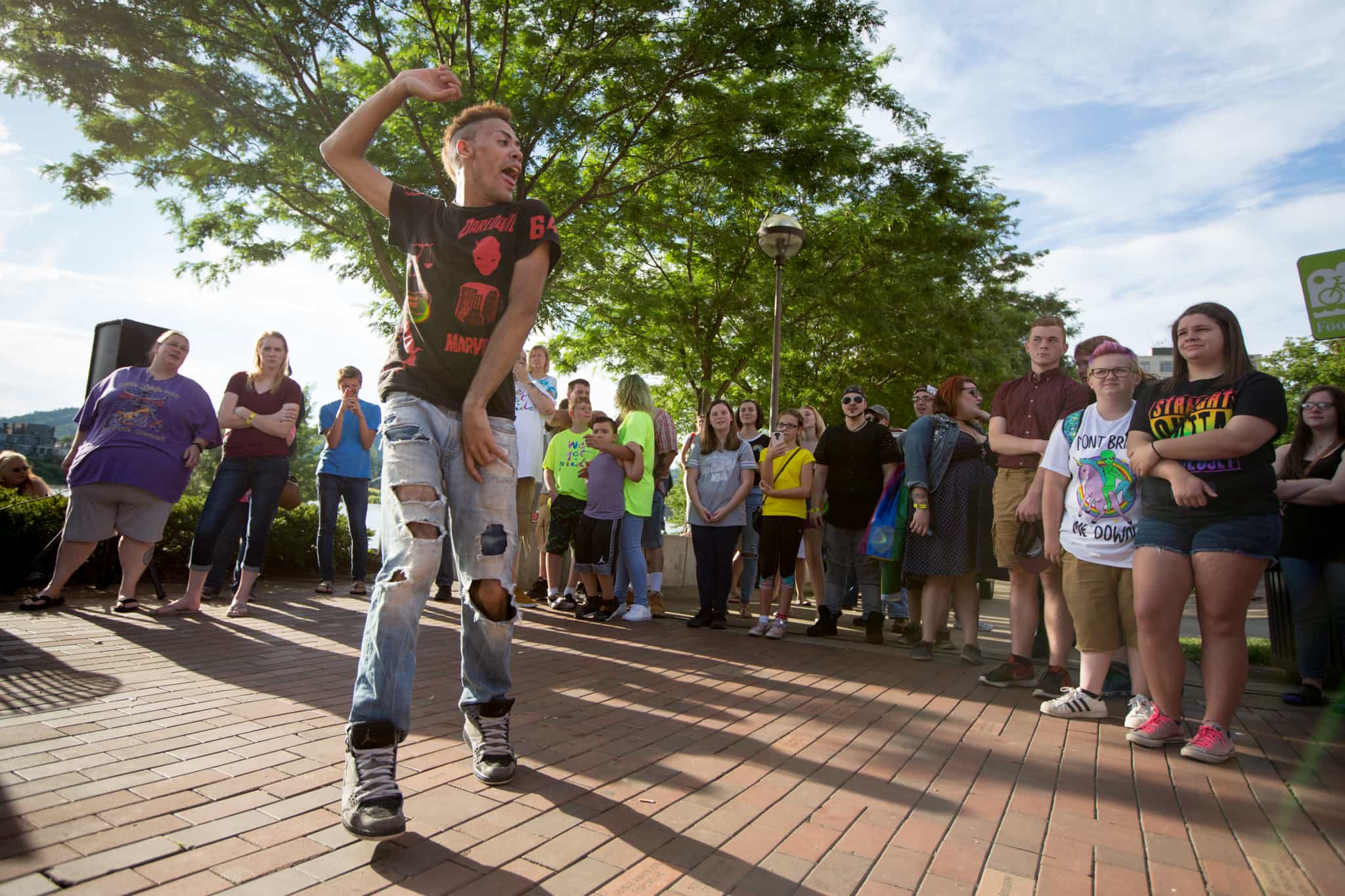 “If you leave here with one thing today, leave knowing that you are all family to me. You pick your own family and your family are the ones that accept you to no bounds of the earth.”— Landen Menough’s message to the crowd. 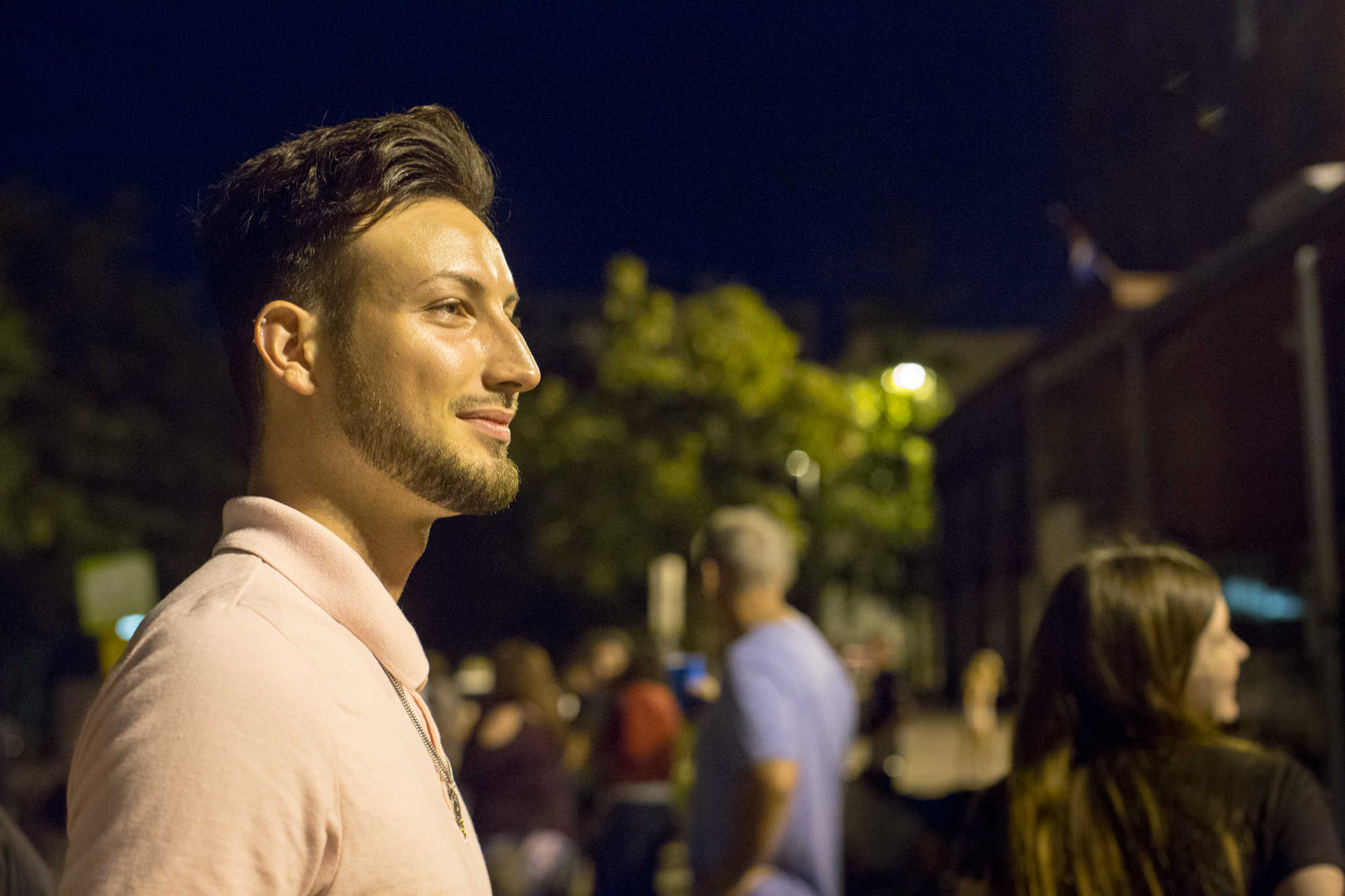 Andrew Vargo has lived in Wheeling, West Virginia all his life.

“There’s strength in numbers. We share love and companionship. We might not all get along, but we all share the same view of our rights… I see a ton of smiles, people from all sorts of places.” — Andrew Vargo 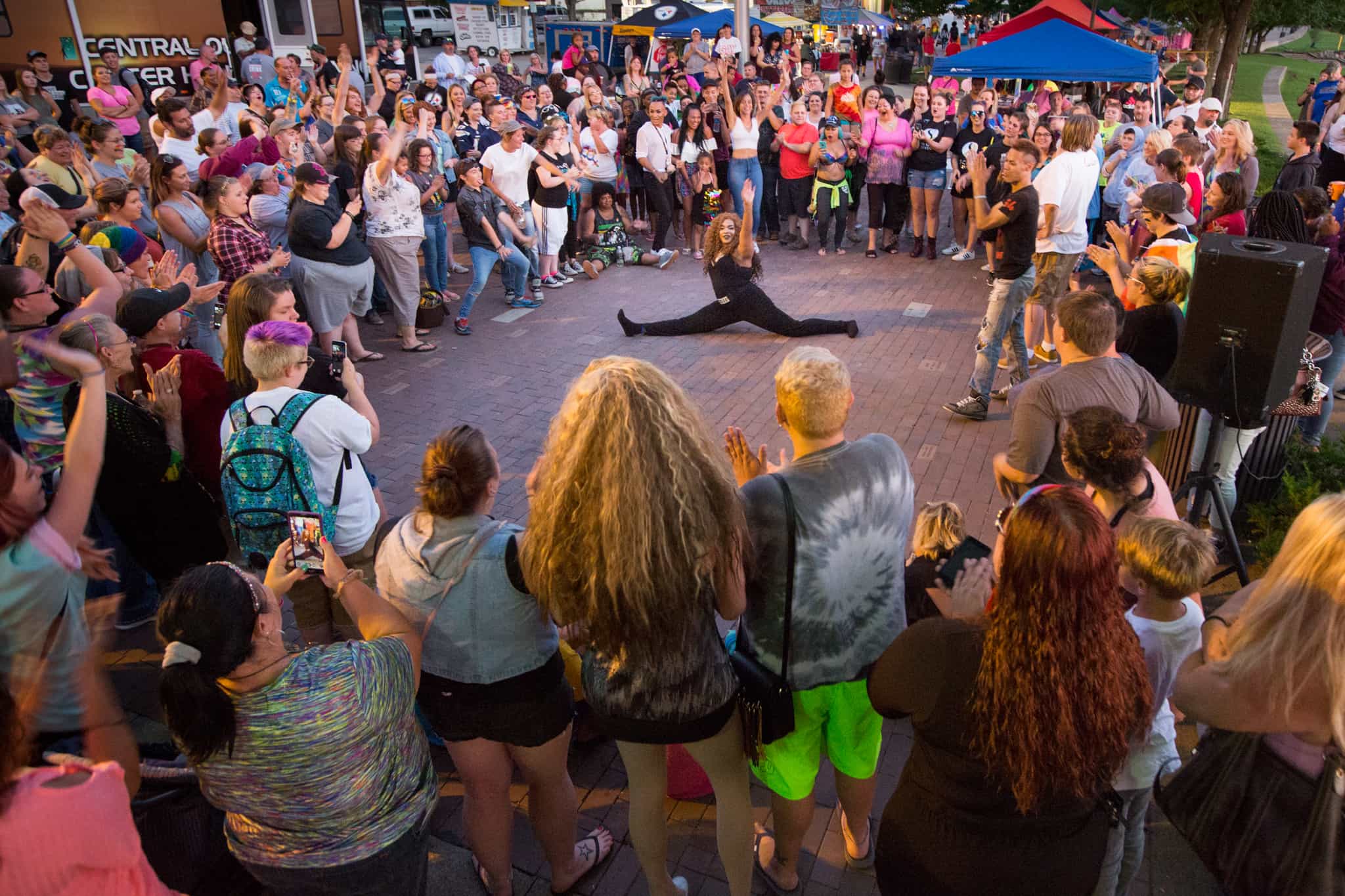 Jordan Sewell, aka “Xenus”, performs for the crowd at Heritage Port.

“It takes guts to come out here in public in drag.” – Jordan Sewell

“Worrying about how to live day to day, being who you are and how you should show who you are — it’s hard,” explained Sewell. Today, “ it feels amazing, a feeling of completeness… I feel like I am now, a little bit – no, a lot more comfortable being who I want to be rather than what others want me to be. It takes guts to come out here in public in drag. Just doing it for the first time – walking out in pubic – outside,” was new. “Never outside, behind closed doors, yes.” 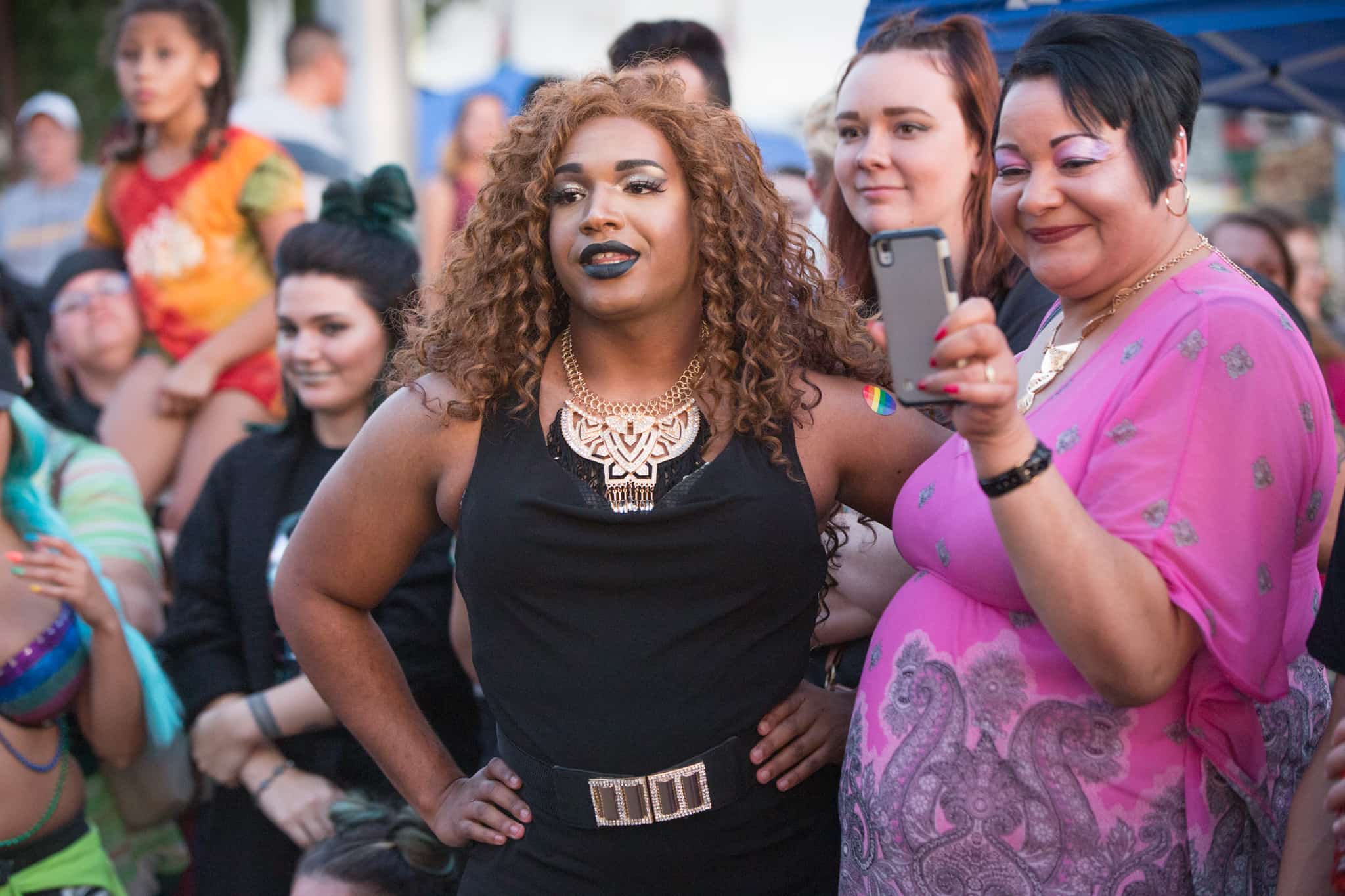 Jordan Sewell, with his mother, Rauslynn Platt as she films the performances. They live in Bridgeport, Ohio.

“I am not gonna hide I was heartbroken, but he’s my son – and my daughter. I’ll support whatever he wants to do in life. He seems so free. He’s so happy and that’s what I want to him to be, happy.” – Rauslynn Platt, Sewell’s mother

In ‘100 Days, 100 Voices’ Nancy Andrews presents photographs depicting the diversity of voices across Appalachia. These portraits strive to show the varied faces, passions, issues and opinions from around the region. These interviews have been edited for brevity and clarity. Contact Nancy Andrews at [email protected] She’s on Twitter @NancyAndrews and on Instagram @NancyAndrews

Editor’s Note: This article has been revised to correctly reflect that Jordan Sewell lives in Bridgeport, Ohio.