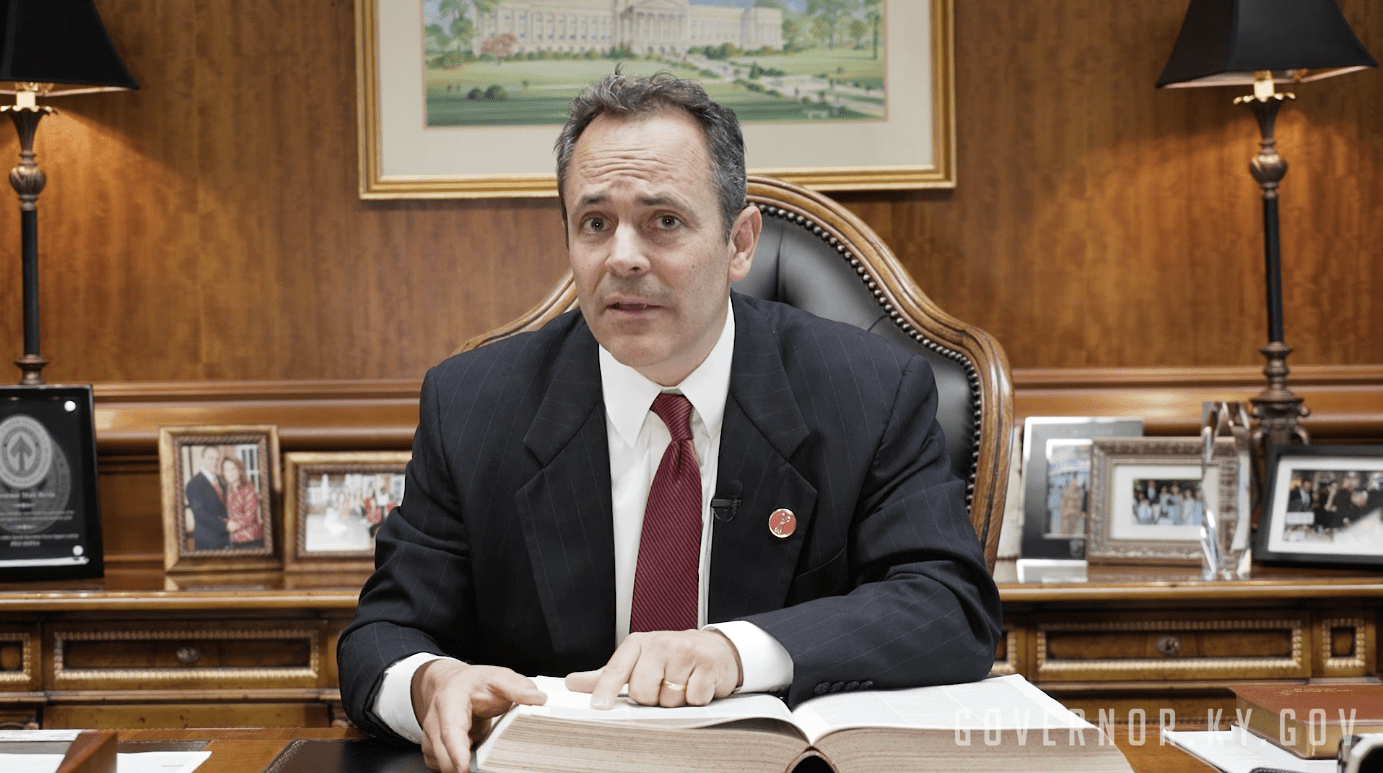 On July 1, Kentucky Governor Matt Bevin released a video on Facebook. In it, he sits in a black suit behind his wooden desk, surrounded by framed photos of his family, and looks directly at the camera, telling viewers the video is a public service announcement about their “friends in the media.”

It’s 4 minutes and 40 seconds of Bevin berating Bill Lamb, general manager of Louisville-based WDRB News, who has a longstanding show called “Point of View.” Lamb wrote an editorial criticizing Bevin for suggesting prayer walks were the solution to lowering crime and violence rates in Louisville. Bevin called out parts of the editorial.

In the video, Bevin is sarcastic, at one point even pulling out a giant Webster’s dictionary and reading the definition of “lie.”

“Stop lying,” Bevin said in the video. “And that’s not just you. That’s others in the media.”

He ends the video by saying: “Let’s start telling the truth in the media, those of us out there who are reading and viewing the things you put out there will appreciate it and you’ll be less likely to be accused of perpetrating fake news.”

It seems some in the media are a little confused about the definition of a "lie." Let's check Webster's.

Some Republican politicians representing Appalachia, like Bevin and West Virginia Attorney General Patrick Morrisey, are calling national, regional, and local news outlets “fake news” when they disagree with the coverage. Using social media, they’re trying to discredit journalists and reach out to their supporters, furthering the anti-media rhetoric President Trump has displayed throughout his candidacy and presidency.

The issue of “fake news” came to the forefront of national conversation during the 2016 presidential election — even beyond Trump’s claims of mistreatment and inaccurate reporting. According to a Buzzfeed analysis last year, the top actual fake election stories generated more engagement on Facebook than major election stories from 19 major news outlets combined.

In his first press conference as President-elect, Trump pointed at a CNN reporter and said to him, “You are fake news!” Since then, the conservative right and the alt-right movement have latched onto the term, accusing major mainstream media publications of lying and being too hard on the Trump administration.

Axios compiled a comprehensive list of all the things President Trump has called “fake news” since then. Most recently, on Monday morning, Trump took a shot at Hillary Clinton’s daughter Chelsea and made claims about the “fake news” on Twitter.

If Chelsea Clinton were asked to hold the seat for her mother,as her mother gave our country away, the Fake News would say CHELSEA FOR PRES!

In the shadow of Trump, several conservative politicians around the country are also crying “fake news” if they see an article with which they disagree. In late May, Bevin took to Twitter to personally attack a journalist who was reporting on an ethics complaint against the governor over the low purchase price of his mansion in Anchorage, a suburb of Louisville. The editor of Louisville’s The Courier Journal said that Bevin’s claims were “untruthful and absurd.”

Then came Bevin’s “fake news” video, which has 94,000 views, nearly 2,000 reactions, and a string of almost 800 comments from people rooting for Bevin and damning the media, as well as critics calling him a liar, posting vomit emojis, and calling him “baby Trump.”

For months, Attorney General Morrisey, who announced this week that he is running for U.S. Senate in 2018, has also been crying foul on media coverage of him and his policies. In March, he posted on Facebook claiming there are fake news outlets in West Virginia: “It’s important for residents in our state to know the difference between those who try to be fair and those who will sell their soul to ‘create’ news,” he wrote.

Then, in mid-June, he used a Facebook post to discredit The Charleston Gazette-Mail. The post got 1,000 reactions and hundreds of shares, but most comments were pushing back on Morrisey, who didn’t give any particular reason why he was lashing out at the newspaper.

The #fakenews outlet in Charleston is back to its old tricks — writing editorials in so-called news articles. #Sad

That same day, he also seemingly tweeted about the paper without naming it in a post that looked similar to Trump’s many tweets about “fake news.”

Neither Bevin nor Morrisey’s office responded to a request for comment on these claims.

This rhetoric has led right-wing groups across the region to perpetuate the idea to the conservative voter base that mainstream media is reporting false information. For instance, the Kentucky Conservatives, an active Facebook group that campaigns for conservative politicians across Kentucky, posted this month about a stat that Trump tweeted and compared it to a New York Times article: “The New York Times is helping us all understand why the news industry is in trouble. #FakeNews.”

Dylan Gorski, who runs the Facebook page, said it was the first time he’s used the phrase on social media. “I’m not a big fan of the term, but I get what it’s aiming at,” he said, noting that it grabs people’s attention online. Gorski has long had problems with national and Kentucky media, which he claims have liberal bias and are “out to get” politicians like Bevin.

Gorski, who is based in Lexington, Kentucky, is a staunch conservative. But he said he’s just as frustrated with right-wing media like Fox News. That’s why he’s a fan of Bevin’s videos, which he said are “very effective,” since they “go around the media” to get the information out.

Trust in the media in general is at an all-time low. According to a 2016 Gallup poll, public trust has fallen to its lowest point since 1972. In particular, Republicans’ confidence in the media dropped from 32 percent in 2015 to 16 percent in 2016. Those low numbers gave way to a space for conspiracy theories and partisan news sites that sometimes spread misinformation. Tackling that is difficult, however.

Pew Research estimates that 42 percent of U.S. adults said social networking sites and search engines had a great deal of responsibility for preventing completely made-up news from gaining attention. However, Barthel said, roughly the same portion said a great deal of responsibility laid with the public and with government and politicians as well.

“So when it comes to how to prevent the spread of fake news,” he added, “many Americans expect social networking sites, politicians and the public itself to do their share.”

That becomes even more complicated in rural areas like Appalachia, where there are consistently lower levels of technology adoption and people are more likely to rely on traditional forms of media like television and newspapers, which have less public trust. Facebook, which is a primary way fake news stories and conspiracy theories are spread, also has high adoption rates in rural areas: 65 percent of adults in rural areas use it compared to 19 percent that use Twitter, according to Pew.

“The radio can reach into hollows where there still is a digital divide,” he said.

The “fake news” claims are important to address, but he said strong journalism — whether it’s local, regional, or national — is the main way to combat it.

“The extent and the chorus of politicians who are singing from the same hymnal on fake news is something we haven’t seen before,” Stehle said, “but the fact they are complaining about coverage is as old as time.”