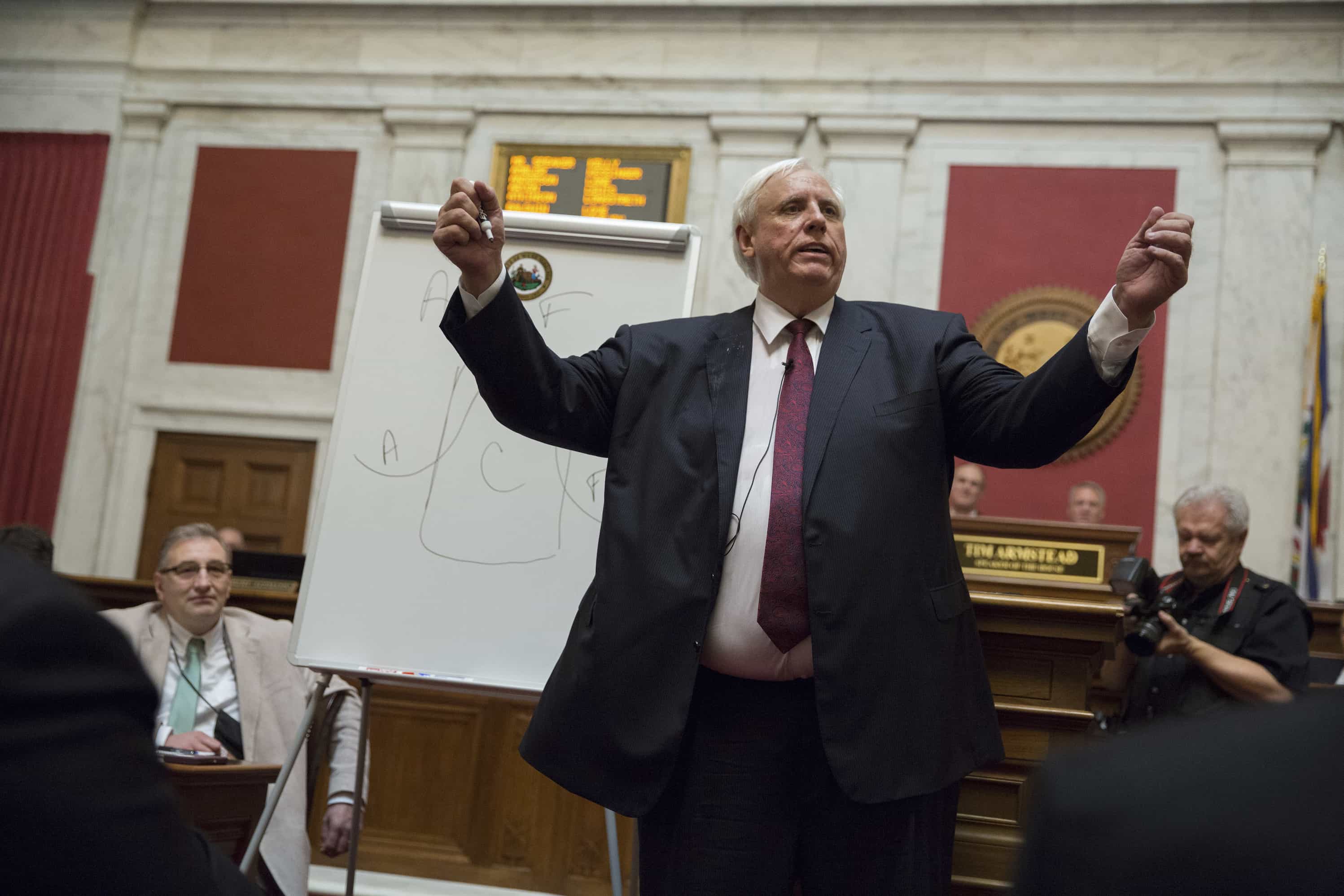 Republicans controlled both chambers of the legislative branch but still found themselves divided, struggling to pass a law while a maverick executive kept the press hanging on every word.

That could describe what’s playing out in Washington, D.C. — but it also applies to the West Virginia Legislature and Governor Jim Justice, who had been fighting for months to find agreement on a state budget that began with a half-billion-dollar shortfall. After weeks of futility, the legislature finally passed a budget in mid-June, which Justice let become law without his signature but with a few choice words that included “travesty,” “pain” and “failures.”

At a time when Congress is struggling to repeal and replace the Affordable Care Act, or Obamacare, and has yet to take up tax reform, infrastructure and the question of whether to raise the debt ceiling, it’s worth asking what lawmakers in Washington, D.C. — as well as other states facing budget shortfalls — can learn from West Virginia.

1) It’s easier to get elected than it is to govern.

Voters don’t always cast a ballot in favor of a particular candidate or policy; often they’re voting against something. Republicans won in Appalachia and beyond by running against President Barack Obama over the last eight years. Now, without Obama to serve as a common foe, Republicans are turning on one another. Factions within each chamber on Capitol Hill make it hard just to pass legislation from one floor, much less both.

The same is true in Charleston, where Republicans in the House and Senate split sharply on budget proposals.

“Republicans aren’t on the same page as much as people think they are on first glance, and the Democratic Party is becoming fractured as well,” said Garrett Ballengee, executive director of the Cardinal Institute, a non-profit advocacy group for conservative economic public policies.

“One of the main reasons why West Virginia went red so intensely wasn’t because of some newly discovered love of conservatism or the Constitution or the military — it’s because they had Obama and the EPA, and if that’s blue, then by God, we’re going to be red. Once those legislators that ran on that platform are in there and have the levers of power, they don’t really know what to do with them.”

2) If you want to shake up the system, make sure you’ve thought through the details of your plan.

In 2014, West Virginia Republicans won a legislative majority in both the House of Delegates and Senate for the first time in more than 80 years. They quickly set to work passing right-to-work legislation, which exempts employees from having to pay dues in a workplace represented by a union; repealing statutory authority for prevailing wages; and instituting tort reform that limited liability and capped punitive damages.

This year, Senate Republicans rolled out a bold plan to essentially phase out the state income tax. Facing a nearly half-billion-dollar budget shortfall, they proposed offsetting the loss in revenue by increasing and broadening the sales tax. The move to do away with the income tax is part of a national movement that’s also playing out in Kansas and Ohio, said Ted Boettner, executive director of the West Virginia Center on Budget and Policy.

Karen Kunz, an associate professor of public administration at West Virginia University, said the experiment didn’t work in Kansas. The tax cuts, enacted in 2012, were rolled back this year, and Gov. Sam Brownback has become one of the nation’s most unpopular governors — but was just tapped by Trump to serve as an ambassador at large for religious freedom.

“If you’re going to phase out the income tax and replace it with sales tax, that’s incredibly regressive,” Kunz said. “The people who pay that are the poor. They already don’t make much. If you want to incentivize people to work, that’s not the way to do it.”

A bill phasing out the income tax over several years passed the Senate but couldn’t pass the House without help from Democrats, who declined to provide votes despite consternation and scolding from the governor, also a Democrat. Essentially, state Republicans broke down into factions, which ensured the demise of the income tax cut.

“If you’re going to do something that is substantially different from the status quo, you’d better have thought it out quite well,” said Ballengee. “You have to be able to make the case that this plan is going to be better in the long run. Whether it’s income tax repeal or Obamacare repeal, you’d better have your ducks in a row or it’s going to get shredded.”

3) Interest groups can inflict death by a thousand cuts to multi-faceted legislation.

A particularly fierce source of opposition to the income tax cut came from West Virginia’s border counties, whose representatives worried that a corresponding sales tax increase would put them at a disadvantage compared to their interstate neighbors. Other proposals sought to broaden the sales tax to new industries, which fought back through their own lobbying efforts.

“On this one issue, it wasn’t a left-right distinction but geographical versus a vision for what’s going to make the state work,” Ballengee said.

Apple and other technology heavyweights fought back against a proposal to tax digital downloads. The health and fitness lobby fought a proposal to tax that industry. Contractors battled the idea of removing the tax exemption for contracting services. Even the vaping industry came out to fight a tax proposal.

“If there’s a lesson at the federal level, it’s that when you do things like a massive income tax cut, you have to expand the sales tax a little bit at least—and that’s when the interest groups come out,” Boettner said. “If you lift the burden in one place, you have to tax somewhere else, and then you see all of of these special interests working to peel off their interests and you end up with nothing.”

4) Cutting spending is harder than it looks, too.

As with shifting tax burdens, however, proposed cuts drove intensive lobbying by those who stood to lose. In April, Justice vetoed a budget bill that would have cut nearly $110 million, mostly from higher education and the state Division of Health and Human Resources. The final $4.2 billion budget, which still cut $16 million from higher education, was allowed to become law without the governor’s signature or veto. The bill also included cuts to culture and history program grants, education and the arts, tourism marketing, fairs and festivals, libraries and public broadcasting.

“It’s much more difficult than what people realize to cut spending, just because of the constituencies,” Ballengee said. “Cutting spending is a great thing for people to run on, but when they get into office and these natural constituency groups organize to make sure that whatever is getting cut is not theirs, legislators realize you have to have a lot of fortitude. It becomes extremely difficult to cut spending.”

6) Keep the Congressional Budget Office (CBO) or find yourself at the president’s mercy.

The CBO has factored into the debate in Congress over Obamacare repeal, weighing in with projections on the impact of various replacement plans. This week, U.S. Rep. Morgan Griffith, who represents Appalachian Southwest Virginia in Congress, sponsored an amendment to gut it that was ultimately voted down.

West Virginia stands as an example of a legislature that does not have an analogous body to analyze budget data. Lawmakers are therefore dependent on budget projections made by the governor’s office, Kunz said..

Kunz said created the CBO in 1974 as a safeguard of its funding powers against the White House, whose Office of Management and Budget had previously been the primary source of revenue projections.

Boettner and Kunz both advocated for the creation of a CBO-like state entity to do the same job.

“It would really be a great idea,” Kunz said. “The problem is it makes legislators more responsible for what they do, and I’m not sure they’d want to do that.”

7) Beware of the media-savvy executive.

Although a Democrat, Justice played a central role in the West Virginia budget battle and how it was perceived nationally.

In his biggest moment as governor to date, Justice unveiled a pile of bull manure on a silver platter as a metaphor for a budget passed by state lawmakers, which he then vetoed. Some West Virginians were a bit embarrassed when the moment went viral.

When our legislators play politics with the budget, the people of WV get a pile of bull-?. We deserve a budget that takes us to prosperity. pic.twitter.com/b34o5Azyxb

Boettner said that Justice’s coal-baron credentials made him bulletproof against the standard Republican attacks on Democrats, and his deep pocketbook made legislators wary of going against him for fear of his funding an opponent.

“That threat is real on the Democratic and Republican side,” Boettner said. “He doesn’t understand process, and he has very sharp elbows. Eventually bullies get dealt with, and he’s been a pretty big bully to the legislature.”

Unlike the president, however, Justice played like he had a personal stake in the budget battle. He launched the legislative process with a proposed budget that included $425 million in tax increases, but later shifted course and backed the Senate proposal to cut the income tax. He held press conferences adorned with attention-grabbing props—besides the aforementioned manure he also displayed a “nothing burger” and a mayonnaise sandwich—and went on the road to stump for his programs.

That proactive, headline-grabbing approach also made Justice a target for his opponents.

“When he did the stunt with cow manure in the state capital, you could almost hear a collective grown come emanating from West Virginia,” Ballengee said. “He’s our ambassador to the world in a lot of ways, and he’s rolling out cow manure on a silver platter. That moment was a line in the sand for a lot of people. It plays well to some folks some of the time, but if you don’t know how to turn it off, people get a little bit tired of it. That carnival-barker mentality gets old fast, whether you’re Democratic or Republican, small government or big.”

That lesson would seem to translate to Donald Trump in many states, but not all — including Alabama, Kentucky, South Carolina, Tennessee and West Virginia, all Appalachian states which maintain a higher-than-50 percent approval rating for the president. Trump’s opponents assume his flamboyant public persona, on display Monday in West Virginia at the National Scout Jamboree, will sink the president’s support, but his fans in Appalachia and beyond seem to love him all the more for it.