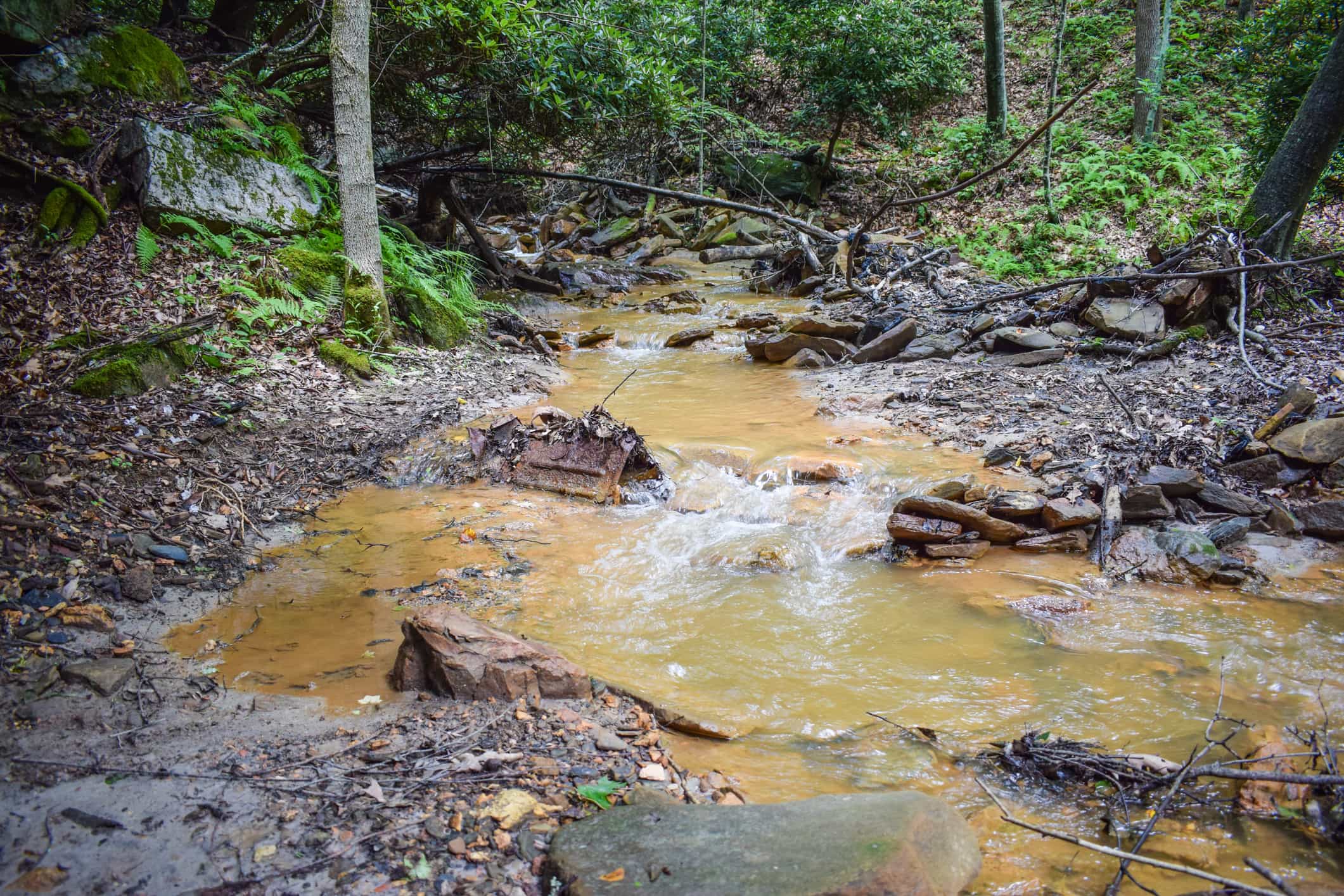 No politician in the country has pushed for the repeal of the Waters of the United States Rule like West Virginia Attorney General Patrick Morrisey. Two years ago, he led a lawsuit with attorneys general from around the country to repeal the Obama-era rule (also known as WOTUS or the Clean Water Rule), which allows the EPA to regulate intermittent streams, tributaries, and ponds that lead to larger waterways.

This week, Morrisey and other lawmakers — along with many agriculture, real estate and fossil fuel industry groups — gained a victory when EPA administrator Scott Pruitt moved to rescind WOTUS with an intent to redefine the EPA’s jurisdiction over waterways in the U.S. and give power back to the states.

But environmental groups say that getting rid of the Clean Water Rule would have significant impacts on drinking water, wildlife habitats and ecology. That’s particularly concerning in Appalachia, where mining pollution has already contaminated many streams and waterways.

“In Appalachia, it’s the small streams, the headwater streams that feed the larger rivers for drinking water supply — and, potentially, from what we know — those are at risk,” said Deborah Murray, a senior attorney for the Southern Environmental Law Center. “It would in a sense remove Clean Water Act protections for streams currently protected and [without the] federal guarantee, there’s no obligation for the polluter to be responsible.”

Under the Clean Water Act of 1972, the EPA was allowed to regulate navigable rivers and lakes in the U.S. However, 2 million miles of headwaters and streams that flow seasonally and intermittently, as well as 20 million acres of wetlands, weren’t included in that original jurisdiction. So, in 1985, the Supreme Court ruled some wetlands were included. But Supreme Court cases in 2001 and 2006 confused the matter even more: Conservative judges said the Clean Water Act applied to “navigable waters,” but liberal judges argued for inclusion of wetlands. In the end, the court decided waters must have a “significant nexus” to navigable rivers, lakes and the sea.

The Obama administration sought to clarify that with the 2015 rule. It is a largely technical document, defining which rivers, streams, lakes and marshes fall under jurisdiction of the Army Corps of Engineers and EPA. It gives federal oversight to some 60 percent of waterways in the U.S., extending protections to tributaries that have signs of flowing water, ditches that act like waterways and regional water features.

According to the Nature Conservancy, there are 400,000 miles of rivers and streams in the Appalachian region, ranging from intermittent mountain streams to waterways and tributaries throughout the Ohio Valley. These sources provide drinking water, as well as important habitats for wildlife and plant life. The Kentucky Waterways Alliance estimates that the state gets 74 percent of their drinking water from waterways that are protected under WOTUS. Thousands of West Virginians and Virginians get their drinking water from streams protected under the rule, as well.

Even so, Morrisey led 22 state attorneys general — including those from Ohio, Kentucky, Tennessee, Georgia and even Oklahoma when Pruitt was attorney general there — in suing the EPA over the rule almost immediately after it was passed. Since then, it has been stuck in federal appeals court and has not gone into full effect. In February, Trump ordered a review of WOTUS, so this latest move by Pruitt was expected.

The main argument against WOTUS is that it is federal overreach and threatens farming operations and other businesses. Critics say that it is an attempt to regulate puddles and ditches on private property. Republican Virginia Congressman Morgan Griffith said in a public statement this week that he encourages the EPA “to clarify regulations that keep our water clean, without an illogical, illegal and job-killing expansion of federal bureaucratic power.”

West Virginia policymakers have been some of the most outspoken opponents of the rule. In a public statement this week, Morrisey said it “asserts sweeping federal authority over usually dry channels, roadside ditches, and isolated streams…[and] over land covered by water only once every one hundred years” — even though the 400-page WOTUS report gave scientific reasoning for why it qualifies wetlands, seasonal and intermittent streams, and tributaries under EPA jurisdiction.

The agriculture industry has been the largest opponent of WOTUS, even though the rule actually preserves an exemption for agriculture operations that was in the Clean Water Act. The bill states the rule “does not add any additional permitting requirements on agriculture.”

Still, said West Virginia Agricultural Commissioner Kent Leonhardt, it’s too difficult to know what waterways fall under the law. Under WOTUS, many farmers have had to hire expensive consultants to determine if ditches or streams are under federal jurisdiction. For instance, if a heavy rainstorm fills ditches on their property, farmers are concerned they’d be controlled by the federal government. Leonhardt said that the state has made plenty of strides in reducing runoff in the Chesapeake Bay watershed with its successful Department of Environmental Protection Program, so federal regulation isn’t necessary.

“People out there are doing water testing and being analyzed, so if something is going wrong we will make the public aware of it and test upstream to find the contaminant and address the actual source rather than imposing regulations on everyone,” Leonhardt said. “Let’s deal with people actually causing problem and that’s a matter of proper testing. That’s a legitimate role for government.”

There may have been isolated incidents of overreach, according to Deborah Murray of the Southern Environmental Law Center. But WOTUS was based on mounds of scientific evidence and more than a million public comments. According to a survey done by the EPA, 97 percent of respondents supported the rule.

With the recent repeal, farmers, business developers and energy companies won’t have to take tributaries and smaller waterways into consideration. Murray said that the move to dismantle the rule seems like another step by the Trump administration to strip the Clean Water Act of key water protections so it is more industry-friendly — which, she argues, will have major effects in Appalachia.

In early February, Trump killed the Stream Protection Rule, which Obama signed into law last year to prevent mining companies from dumping toxic waste into streams. The law, which was not fully put into effect before it was repealed, had been a big victory for Appalachian environmental and public health groups, as there is a growing body of evidence that shows toxic chemicals like arsenic and lead have contaminated waterways in the region. The environmental group Appalachian Voices estimates that since the 1990s, coal companies have buried more than 2,000 miles of streams in the region from dumping mountaintop removal mining waste.

Coupled with the repeal of WOTUS, it could mean more contamination and less regulation of Appalachian waterways.

“It seems that Appalachian communities are facing a two-headed punch, of sorts,” Murray said. “One of the first things the [Trump administration did] was repeal the Stream Protection Rule, so that is already is removing safeguards, particularly for mining. Combine that with proposed repeal of WOTUS and it raises very serious concerns.”

Soon, a public comment period will open for 30 days so that people can respond to the repeal. If the Trump administration proposes a new water rule, it will likely be challenged in court again.

“I think you’re going to see a tremendous backlash and court battles over this,” Murray said. “With the 2015 rule, there was so much science and careful deliberation that backed it up, so this is going to be a big one.”